There have been safety fears over highly flammable cladding since the Grenfell tragedy in 2017. 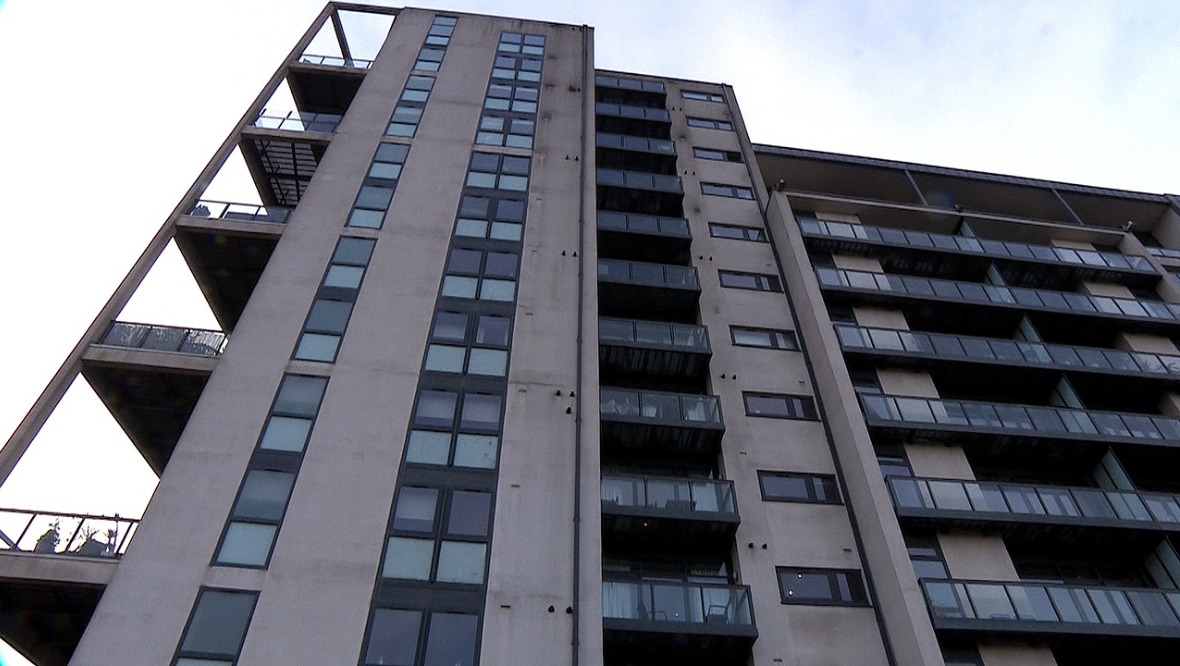 Hundreds of owners in buildings covered with highly flammable cladding are demanding urgent action to make their homes safe.

A near £100m remedial fund granted to the Scottish Government by the UK treasury has yet to be spent, angering owners who want to sell their flats but can’t.

It could cost them tens of thousands of pounds if they had to replace the unsafe material themselves.

Safety fears over combustible cladding were raised following the Grenfell Tower tragedy in London in 2017, when a fire tore through the high-rise residential building, claiming 72 lives.

The Scottish Government believes building developers should be contributing to replace unsafe cladding, but despite four meetings of a working group over the last ten months, a solution is yet to be found.

One affected homeowner told Scotland Tonight – to be broadcast on STV at 7.30pm on Thursday – she was desperate to move closer to her grandchildren, but can’t sell her current property in Edinburgh until she can prove the building is fire safe.

Like many other people caught up in the situation, she’s been left extremely frustrated by the lack of progress.

The 65-year-old, who we’re naming only as Catherine, said: “Since July 2019, my life has been on hold and I just can’t go anywhere.

“It’s soul destroying, every night I’m looking at properties coming up on the market – but I can’t go for any of them. It should be my decision if I want to move flat but now I can’t.”

Catherine’s building doesn’t have the same cladding as Grenfell, but she in order to sell the property she needs a special certificate to prove to potential buyers that it’s safe.

An EWS1 form can cost up to £3000 does not guarantee a lender will provide a mortgage for the property.

While she expects developers to pay their share, she wants the Scottish Government to start spending the £97.1m fund.

“I didn’t build the flats, I would expect the builders should be made to remove them,” Catherine said. “I can’t afford to foot the bill, I don’t think anyone could.

“People say the fund to help us is a drop in the ocean, but let’s make a splash. I just want someone to help us so we can get our properties on the market.”

Father of two Abhijeet Kadwe, from Glasgow, is also considering moving house, but can’t due to cladding on his block of flats.

What happened at Grenfell has left him worried for his family’s safety, but he doesn’t know when or how a solution will be found.

He said: “If given the choice I would really want to move out and live in a different house, but it’s a Catch-22 situation because, even though I want to, I can’t.

‘When I think about Grenfell I can literally recount those incidents in my mind. If something was to go wrong in our flat, what would we do? I live in a block which is full of cladding. I really don’t know how I would face the situation with two small kids, I’m really worried.’

“I’m really worried – I hope there’s a light at the end of the tunnel, but I just don’t know how big the tunnel is.

“When I think about Grenfell I can literally recount those incidents in my mind. If something was to go wrong in our flat, what would we do? I live in a block which is full of cladding. I really don’t know how I would face the situation with two small kids, I’m really worried.

“I would like a concrete plan on what the next steps are. It’s so confusing, no one knows when anything will be sorted or if we will need to pay for it.”

Housing minister Kevin Stewart insisted the working group was trying to find a swift solution and accepted owners were in a difficult position through no fault of their own.

But he said the £100m fund was not enough to solve the problem and that developers would have to contribute.

He said: “The discussions as a whole have been largely about the outcome of the technical and the industry aspects of all of this, which are things we need to get absolutely right in order to move forward and to find resolution.

“We must do this absolutely right and sometimes doing things right does take a bit of time.

“I recognise that people out there want resolution as quickly as possible but I’m also sure that they want us to help the maximum number of people possible.”

He added: “We have not got enough from the UK Treasury. What we must do, and I think the public at large would expect us to do this, is to ensure the developers reach into their own pockets to help alleviate this.”

Flat owner Lisa Milne doesn’t want to move but as a member of her residents’ association has seen the “misery” the situation has caused.

She believes it’s important the government starts spending the fund.

She said: “When we saw the Westminster fund announced last year we all celebrated and thought that was the end to our problems, but we quickly realised it wasn’t.

“The housing minister would like the fund to be spent in the best way for taxpayers – we’re taxpayers as well.

“We’ve paid into that and we’re stuck here – I’m really fearful that we’re not going to be helped by the Scottish Government.”

“I’ve seen my neighbours crying – there’s a single mum in our block that needed to move for childcare, but she can’t. My heart just breaks for these people.”