What was the mysterious fireball that crossed Scotland's night sky?

The UK Meteor Network was inundated with reports of people seeing a bright light late on Wednesday. 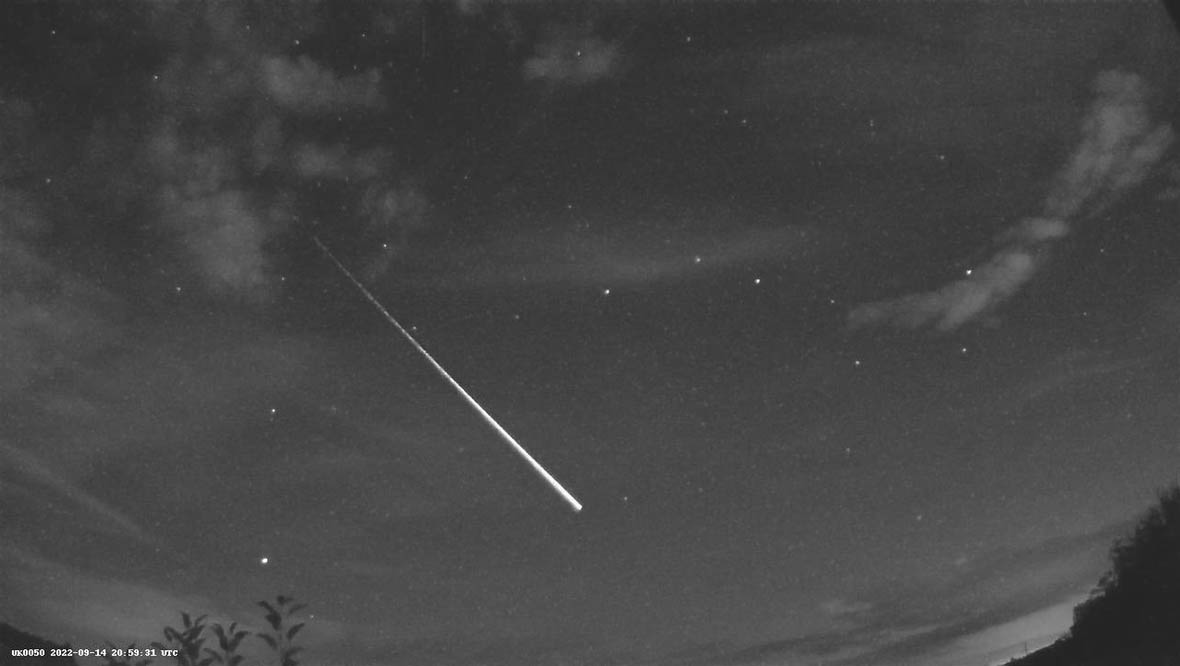 There have been more than 800 reports of a mysterious “fireball” crossing the night sky over Scotland and Northern Ireland.

The UK Meteor Network was inundated with reports of people seeing a bright light above them late on Wednesday evening.

It was witnessed heading west by people across Scotland – including Glasgow, Edinburgh, Ayrshire, the Borders, Lanarkshire and Renfrewshire – at around 10pm.

Sightings were also reported in England and Northern Ireland.

What does the UK Meteor Network say?

The UK Meteor Network, a network of 170 detection cameras recording meteors and fireballs over the United Kingdom, initially said it was “investigating to ascertain what the object was, meteor or space debris”.

After studying a wealth of data, the network tweeted later on Thursday that the fireball was “definitely a meteor”.

It also said the preliminary trajectory calculated by the International Meteor Organisation (IMO) indicated the object would have landed in the Atlantic Ocean, south of the Hebrides.

Danny Nell, 21, was walking his dog in Johnstone, just west of Paisley and Glasgow, when he saw the fireball.

He said: “I was walking my dog and it was strangely enough 10pm on the dot, and I just saw the flash in the sky and pulled out my phone and recorded it.

“I thought it may be a firework at first because there was a lot of Scottish football on, but quickly realised it wasn’t and just grabbed my phone to see if I could catch it.”

Les Wood also caught the fireball on his dashcam as he was driving through Glasgow.

Steve Owens, an astronomer and science communicator at the Glasgow Science Centre, was one of those who saw the light.

He explained that usually, such sights only last for a fraction of a second, but that on this occasion, it was more visible.

“It was incredible. I was sitting in my living room last night and saw out of the window, due south, this brilliant fireball, this meteor, steaking across the sky,” he told the BBC’s Good Morning Scotland programme.

Mr Owens described it as a “pretty incredible sight” to witness.

He said: “Normally if you see a meteor or a shooting star, they are just tiny little streaks of light, they last for a fraction of a second.

“This one was streaking across the sky for at least ten seconds, probably longer than that, and it travelled from due south all the way across the the west, so it was a pretty incredible sight.”

The astronomer suggested the fireball witnessed on Wednesday may have been around the size of a golf ball or a cricket bat.

He explained: “Normally these little streaks of light, these little shooting stars, they all burn up and everything just vanishes and evaporates, but the thing last night was bigger than a little bit of dust.

“The one last night might have been the size of a golf ball or maybe a cricket bat, maybe bigger than that, so it’s certainly not impossible that bits could have landed.

“It looked like it was travelling a fair distance, as these things do, and it was fairly flat across the sky as I saw it.”

The IMO describes fireballs as meteors that appear brighter than normal.

It says fireballs occur every day all over the Earth but they are a rare spectacle for individuals – witnessed very few times per lifetime.

As the size of thee objects approach a millimeter, they begin to produce enough light to be seen upon entry to the upper atmosphere as ordinary meteors.

Due to the velocity at which they strike the Earth’s atmosphere, fragments larger than one millimeter have the capability to produce a bright flash as they streak through the heavens above.

A full description of fireballs can be read on the IMO’s website.