Stormy weather is causing disruption to travel and businesses across Scotland. 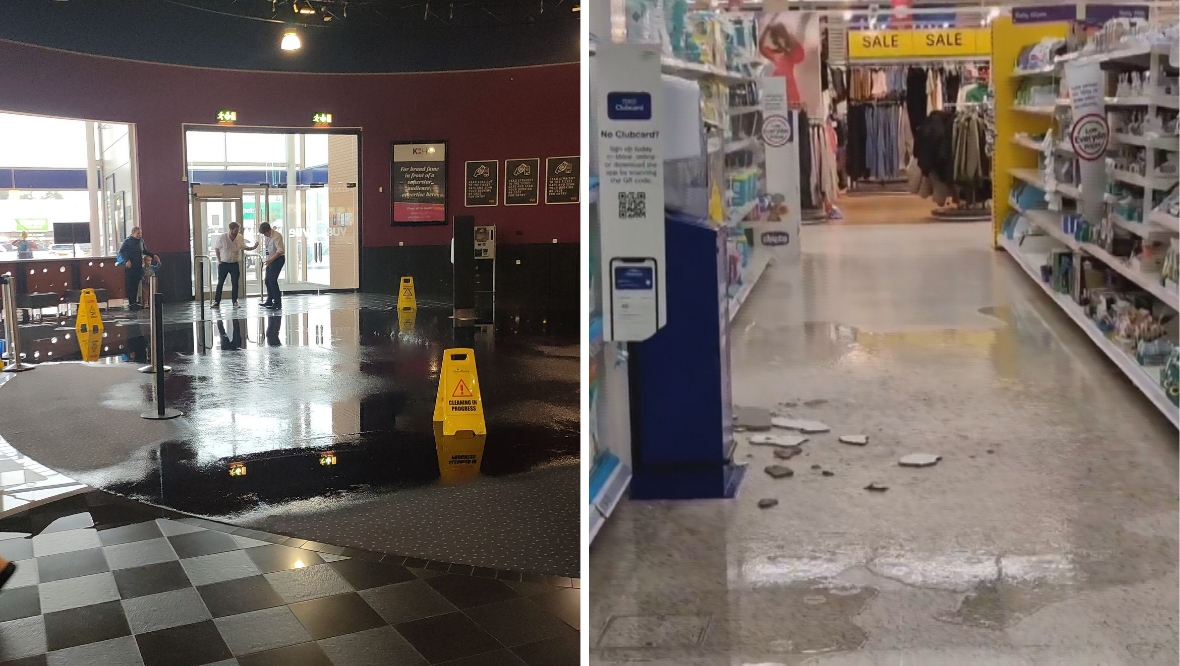 Adverse weather conditions continue to cause disruption across the country on Monday after a spell of heavy rain and thunderstorms on Sunday.

Following a period of scorching weather, a yellow weather warning for “flash flooding” and “thunderstorms” was issued by forecasters for the majority of the mainland on Sunday and Monday.

As of 1pm on Monday, the Scottish Environment Protection Agency (SEPA) has a total of 15 flood alerts in place across the country as rain continues to fall.

Traffic Scotland has also warned drivers to take care when travelling as surface water is affecting many routes, while there have been reports of flooding and travel disruption in areas of the north of Scotland.

ScotRail has also issued a warning to passengers urging them to check their journeys before travelling as scatterings of heavy rain and thunderstorms are likely to affect some services.

On Sunday, a supermarket in Inverness was forced to close after a period of heavy rain caused the roof to cave in and water to pour into the store.

Videos posted on social media showed the rain cascading through the ceiling of the Tesco at Inshes retail park as parts of the ceiling fell to the floor.

Customers and staff were forced to evacuate and the shop was temporarily closed while the damage to the roof was assessed. It is understood that the store remains closed into Monday.

A Tesco spokesperson said: “Our Inverness Inshes Extra store is temporarily closed while we assess some damage to the roof. We’re sorry for any inconvenience. We’re working to reopen as soon as possible.”

At the same retail park on Sunday, a Vue cinema was forced to close after torrential rain damaged the roof causing water to pour into a screen and flood the foyer.

Clips circulating on social media showed customers evacuating after a screen became flooded and a heavy downpour was seen to be coming through the ceiling to soak the foyer of the cinema.

A spokeswoman for Vue said: “Vue Inverness is temporarily closed due to adverse weather conditions. We’re currently working with contractors to assess any damage.

“Customers with a pre booked ticket, while the venue is closed, will be refunded automatically (for card payments).

“We apologise for any inconvenience and look forward to welcoming customers back to the Big Screen experience soon.”

Lightning strikes were seen across Scotland on Sunday as thunderstorms rumbled late into the night.

A yellow weather warning remains in place across the country until midnight.

We’ve gone into the ‘breakdown’ phase of the current hot spell with big thundery downpours developing sporadically across the country. Of course, some of these downpours have led to local flood issues, and due to the hardened state of the ground after recent dry conditions, some more flooding is possible.

A weather front will re-invigorate this afternoon across central and eastern parts of the country for the likes of Aberdeenshire, Angus, Perthshire, Stirlingshire, Lanarkshire, Edinburgh and the Lothians where it will sit through the day and into tomorrow morning.

These areas have been drier than normal every month so far this year making the ground much drier than usual which means it takes rain longer to soak in. This means water sits on the surface for longer and runs straight into burns and rivers, rather than soaking into fields with a slower release into river basins. This quickened process means rivers could struggle to cope and that’s where the flood risk comes in.

The weather will be quieter on Tuesday and Wednesday before more heavy rain moves into the west of the country on Wednesday and Saturday.

Will that be the last of the summer? In short, no. Further areas of high pressure are forecast in the coming weeks bringing more settled spells, and undoubtably more very warm conditions at times. Due to the extreme heat that’s built up in southern and western Europe this year, I think it’s likely we’ll see a warmer than normal autumn as those warmer plumes occasionally drift northwards.