The First Minister said Ukrainian refugees fleeing the war in their homeland could arrive in the country this weekend. 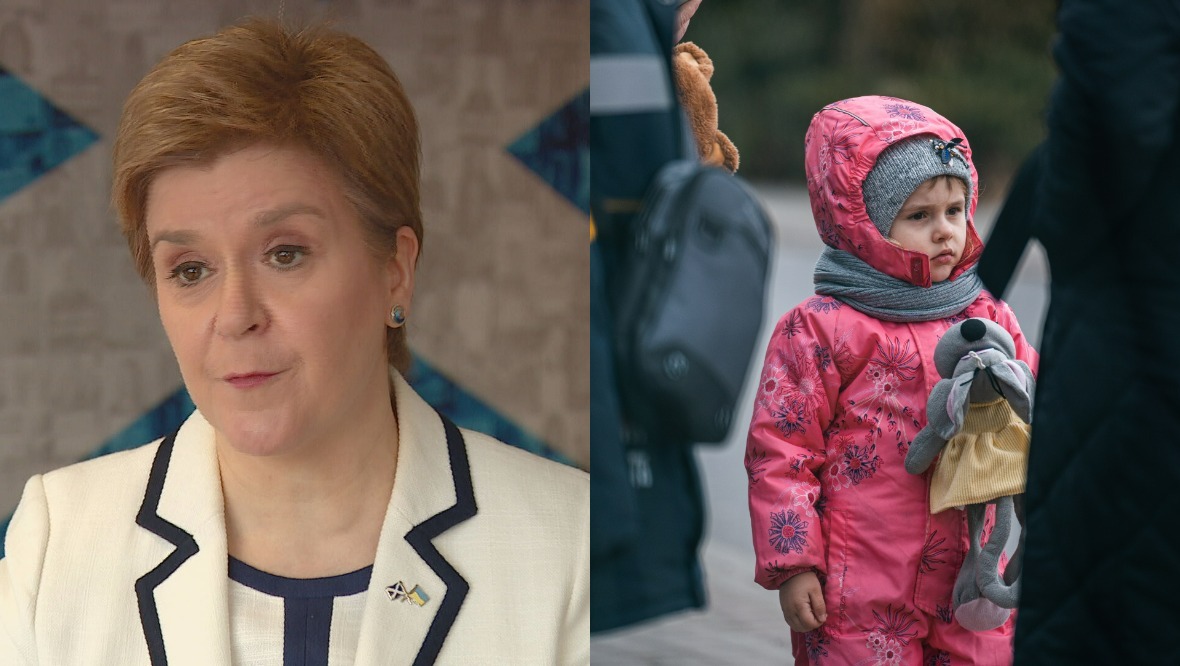 The First Minister has announced more than £1m of funding will go towards organisations supporting Ukrainian refugees arriving in Scotland.

Nicola Sturgeon made the announcement during a visit to the headquarters of the Scottish Refugee Council on Wednesday as she said the country can expect Ukrainians arriving “as early as this weekend”.

The services set to receive funding will provide advice, support and information services for Ukrainian people and their families fleeing the Russian invasion.

Ukraine Advice Scotland, run by Scottish charity JustRight Scotland, will also receive funding from the Scottish Government to provide financial stability for the project, which provides free legal advice to those displaced by the conflict.

“Scotland is ready to play its part to offer safety and sanctuary to those forced to leave their homes because of Russia’s brutal invasion, and it is heartening to see preparations for increased support, advice and information already being put in place.

“We are determined to do everything in our power to give them the warmest welcome possible when people so start to arrive and we will need organisations like SRC and JustRight Scotland, as well as the support of the people of Scotland, to do just that.”

She added: “What we are seeking to achieve and certainly planning for here in Scotland is for people to start arriving here as early as this weekend.

“If we are able to get the super sponsor proposal, which the UK Government have given agreement in principle to, if we can get that launched to run in parallel with the first phase of the wider UK scheme, that would allow people to start arriving here from the weekend.”

Asked if she would host a refugee, Sturgeon said would “do that if that is necessary”.

She added: “I’m not going to ask other people to do things I wouldn’t be prepared to do myself.”

She stressed that “everybody’s circumstances are different”, adding: “I don’t think we should get into a position of making people feel bad if they are not in a position to offer accommodation.”

Speaking about potentially taking someone in herself, she said: “In my case I am willing to do that if that is necessary and if that was thought appropriate.

“For somebody coming from Ukraine it may be that they wouldn’t want to come and live with the First Minister with all the scrutiny that might come with that.

“But certainly if that was something that was necessary and considered to be appropriate, I am certainly willing to step up and do whatever I can.”

Sabir Zazai, chief executive of Scottish Refugee Council, said: “People fleeing the war in Ukraine will need advice and support to help them find their feet and settle into life in Scotland.

“We’ll provide practical, one-to-one support to new arrivals and their families, helping with everything from registering with a GP, to sourcing school uniforms and applying for jobs.

“No matter which part of the world people are from or which conflict they are fleeing, our advisors work with people in an empowering, trauma-informed way to build the foundations of a safe life here in Scotland.”

Kirsty Thomson, managing director of JustRight Scotland, said: “In this extraordinary time, we welcome the commitment from the Scottish Government to fund Ukraine Advice Scotland which will support Ukrainian people who are seeking safety in Scotland.

“This vital, free and confidential service will provide high-quality initial legal assistance to address needs and protect fundamental rights as well as linking into other legal and support networks that have been established by our partners.”