Activists gather in front of the Russian Consulate in Edinburgh and vigil held in Glasgow's George Square. 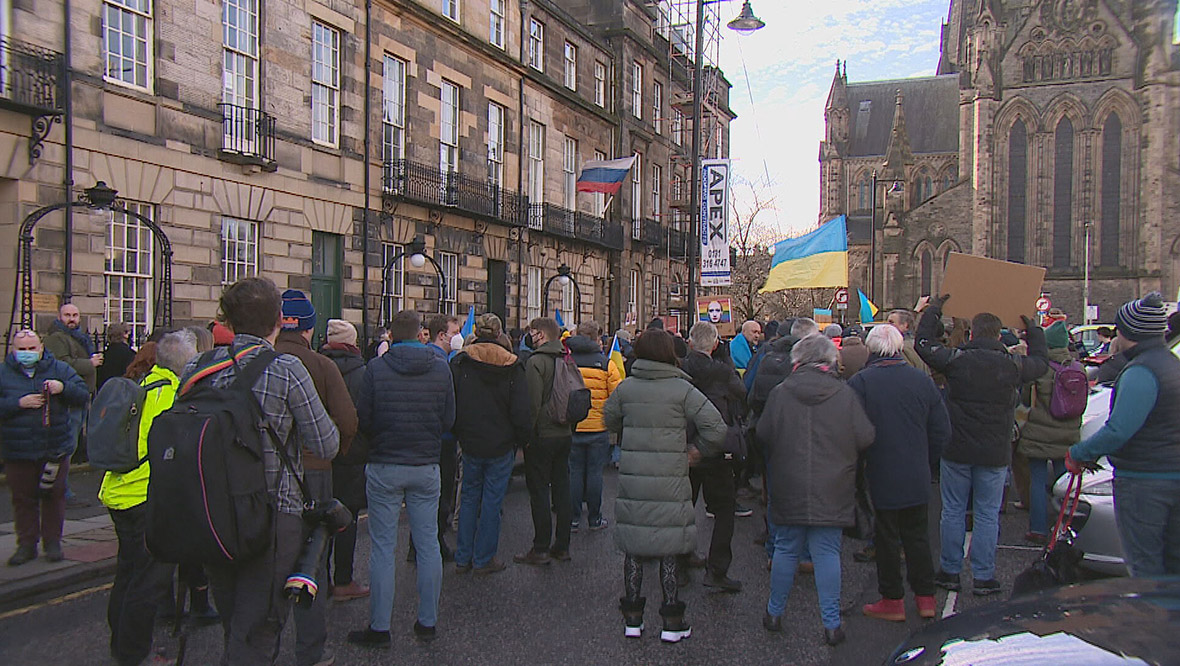 Protesters gathered in Edinburgh and Glasgow on Friday to demonstrate Russia’s invasion of Ukraine.

Hundreds of activists gathered outside the Russian Consulate in Edinburgh for a second day, while a vigil was held in Glasgow’s George Square.

Ukrainian President Volodymyr Zelensky has demanded tougher sanctions and support to fend off the invasion as fighting closes in on the capital, Kyiv.

It was a demand echoed by the protesters in Scotland, who waved placards and chanted “Putin, stop”.

One man at the Edinburgh protest told STV News: “My father was Ukrainian. He came across here after the Second World War. It’s heart-breaking, this is inevitable.”

Another said: “We should be standing united with the international community, thinking about the severest sanctions that can be applied.”

Meanwhile in Glasgow, a vigil was held throughout the day in George Square, with the Ukrainian flag flown from Glasgow City Chambers.

Campaigners tearfully embraced and others carried placards protesting against Russia’s invasion of Ukraine.

The Prime Minister told Nato leaders in a virtual meeting on Friday that the UK would echo measures announced by the EU to target the Russian leader.

President Joe Biden later announced that the US was freezing the assets of Mr Putin and Mr Lavrov.

Referring to Putin’s wish to recover territory which previously fell under the USSR, Johnson said Russia was “engaging in a revanchist mission to overturn the post-Cold War order”.

Johnson told allies “the UK would introduce sanctions against President Putin and foreign minister Sergei Lavrov imminently, on top of the sanctions package the UK announced yesterday”, according to a No 10 spokesman.

“He warned the group that the Russian president’s ambitions might not stop there and that this was a Euro-Atlantic crisis with global consequences,” he said.

The Prime Minister also used the meeting to urge “immediate action” over the banning of Russia from the Swift payment system to “inflict maximum pain” on the Kremlin.

Protests against the Russian invasion have been taking place across Europe.

Meanwhile, party leaders at the Scottish Parliament on Thursday unequivocally condemned Vladimir Putin over the Russian invasion of Ukraine.

First Minister Nicola Sturgeon insisted the Russian leader must now face the “severest of consequences” in light of his decision to launch military action.

The First Minister told MSPs: “Parliament will discuss the unfolding situation in Ukraine later and express its solidarity with a country whose very existence as an independent democracy is now under attack.

“However, at this first sitting since Russia’s full-scale invasion, I wanted to condemn in the strongest possible terms the unprovoked, imperialist aggression of Vladimir Putin.

“There can be no doubt that he must face the severest of consequences – sanctions on him and his network of oligarchs and agents, their expulsion from countries across the world.”

Defence secretary Ben Wallace said more than 450 Russian troops had been killed, as a fierce resistance meant Moscow “failed” on the main objective on the first day of fighting.

Johnson and Zelensky spoke after Kyiv was hit by “horrific rocket strikes” and fighting reached the outskirts of the capital overnight, before gunfire was reported in the city centre.

After the call, the president said Ukraine “needs the support of partners more than ever”.

“We demand effective counteraction to the Russian Federation. Sanctions must be further strengthened,” Zelensky added.