Roads and train lines have been flooded across the country amid severe weather warnings. 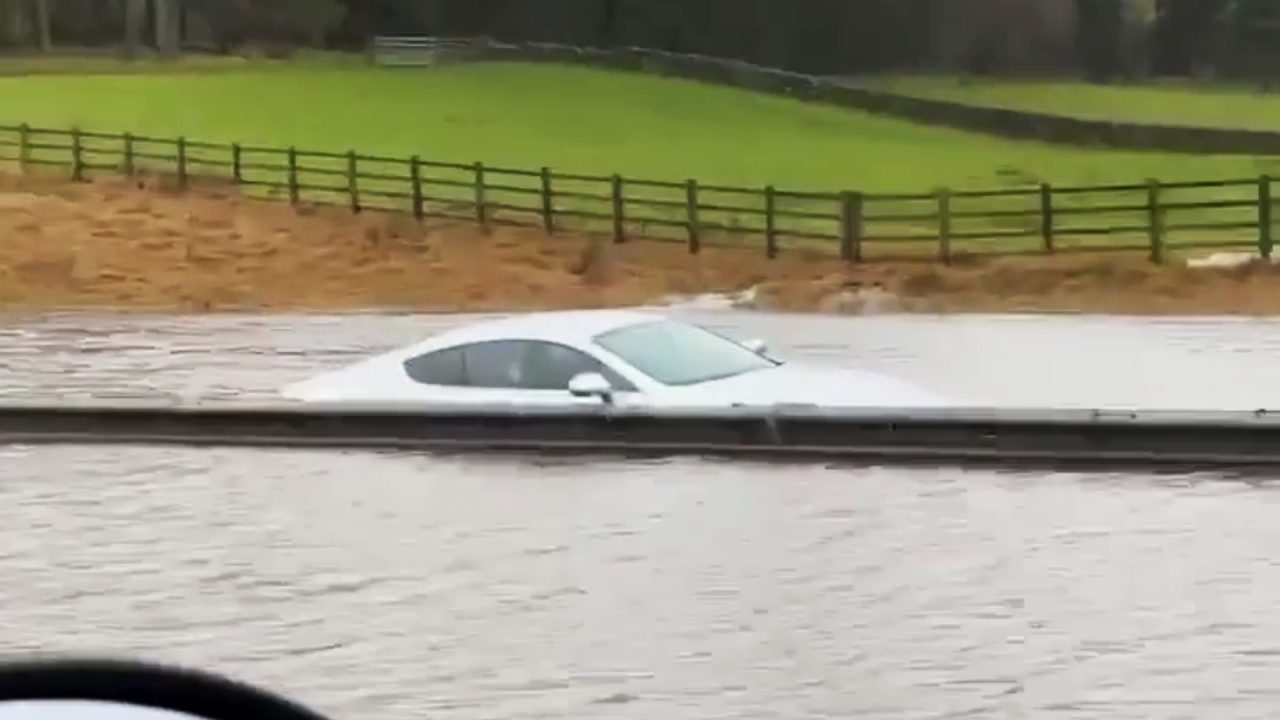 People are being urged to consider delaying travel plans as the deadly bomb cyclone that has sent temperatures plunging in the United States has brought heavy rain, wind, snow and ice across Scotland.

The Met Office has issued five weather warnings across the country.

Police Scotland said there is a high risk of disruption and urged people to plan ahead and drive to the conditions if they have to travel.

Traffic towards Edinburgh Airport has been diverted after part of Eastfield Road was shut due to flooding.

Police have closed one section of the dumbbell roundabouts at the top of the road, with westbound traffic heading to the airport diverted to Newbridge and then back along Glasgow Road.

Exiting traffic will be diverted eastbound towards the Gogar roundabout, a spokesperson for Edinburgh Airport said.

Meanwhile multiple train lines have been made impassable by flooding. ScotRail said the North Clyde and Wemyss Bay routes were too badly flooded to run services.

All services on the North Clyde routes, including via both Glasgow Central low level and Queen Street low level, are affected.

The line at Anniesland is also flooded, meaning trains via Singer cannot run either.

The West Coast Main Line has been closed between Lockerbie and Carstairs due to flooding at Beattock, Network Rail has said.

A crash involving a police car at around 8am during heavy rain in Glasgow has caused traffic to build up on the M8 Kingston Bridge eastbound near Junction 19.

The incident is now cleared and the police officer driving the car has been taken to hospital.

The Clydeside Expressway eastbound nearside lane is closed at the Yorkhill overbridge due to flooding.

The M9 is closed eastbound at Junction 9 due to flooding. Drivers have been advised to use an alternative route and allow extra time for their journey.

The M9 westbound remains open but is restricted due to the flooding.

The A85 is closed in both directions at Lix Toll due to flooding.

The A78 is closed between Hunterston and Portencross due to flooding. It is also closed at Bankfoot Roundabout, Inverkip in both directions due to adverse weather conditions.

The A8 East Hamilton Street, Greenock, is closed due to flooding.

The A75 at Crocketford is currently restricted due to fallen trees on the carriageway.

The A76 in both directions at Sanquar is restricted due to flooding.

The Scottish Government said the Multi-Agency Response Team will monitor conditions throughout the amber warning period.

Superintendent Stewart Mackie, of Police Scotland’s Road Policing Division, said: “An amber weather warning has been issued for heavy rainfall and flooding across southern Scotland, and people should consider delaying any travel plans until conditions improve.

“If your journey is essential, please plan ahead by making sure you have sufficient fuel and supplies in your vehicle, a charged mobile telephone and always drive as the conditions allow.

“Be aware road closures and travel delays are likely, with potential disruption to public transport services.”

The Scottish Environment Protection Agency has issued 27 flood warnings and ten flood alerts across Argyll and Bute, Ayrshire and Arran, central Scotland, Dumfries and Galloway, Dundee and Angus, Edinburgh and the Lothians, Fife, the Borders, Tayside and west central Scotland.

The Met Office issued a yellow weather warning for heavy rain from 3am on Friday for 15 hours covering Edinburgh, Glasgow and Stirling.

An amber warning for rain, which poses a danger to life, will come into force over Dumfries and Galloway and Ayrshire on Friday at the same time.

Meteorologist Simon Partridge said the wet and windy weather was being caused by the bomb cyclone in the US.

“The UK weather is going to remain unsettled with further spells of wet and windy weather due to the strengthening of the jet stream because of the weather in the US,” he said.

A snow and ice yellow warning covering the entire north of Scotland has been issued for midnight on Thursday until 9pm on Friday.

It covers the Isle of Lewis and Skye in the west, up to the north coast of the mainland, as far east as Inverurie, and south down to the Cowal peninsula.

The Scottish Government said the Transport Scotland Resilience Room will be activated at the National Control Centre to monitor impacts.

Scottish transport minister Jenny Gilruth said: “The Met Office is warning us to expect a period of difficult weather in parts of southern Scotland on Friday, with heavy rain likely to impact travel in the amber warning area.

“The conditions could potentially bring disruption to the transport network, so it’s important people plan their journeys before they set off – particularly if they’re looking to use the trunk roads or travel by rail.”

Mr Partridge said that the impact on the UK would be “nowhere near” as significant as it was on the US.

“The effect it’s having on the UK is nowhere near as dramatic because that system has brought up a lot of cold air further south, across the US,” he said.

Indeed, the cyclone is only having an effect on the UK due to its impact on the North Atlantic jet stream.

“So the starker the difference in temperature between the northern edge of it and southern edge, the stronger the jet stream becomes.”

He said the knock-on effect for the UK is spells of wet and windy weather over the next seven to ten days.

Flooding and travel disruption is expected across the country with difficult driving conditions and some road closures forecast in Glasgow, Edinburgh, Stirling, Perth, Ayrshire, Dumfries and Galloway and Argyll and Bute.

Forecasters said where flooding occurs, there is a chance of delays or cancellations to train and bus services.

It comes after ScotRail resumed normal service after most trains were cancelled over the Christmas period due to strike action by Network Rail workers.

Amid heavy rain, there is a chance some communities will become cut off by flooded roads, the Met Office said.

Homes and businesses could be flooded, causing damage to some buildings too.