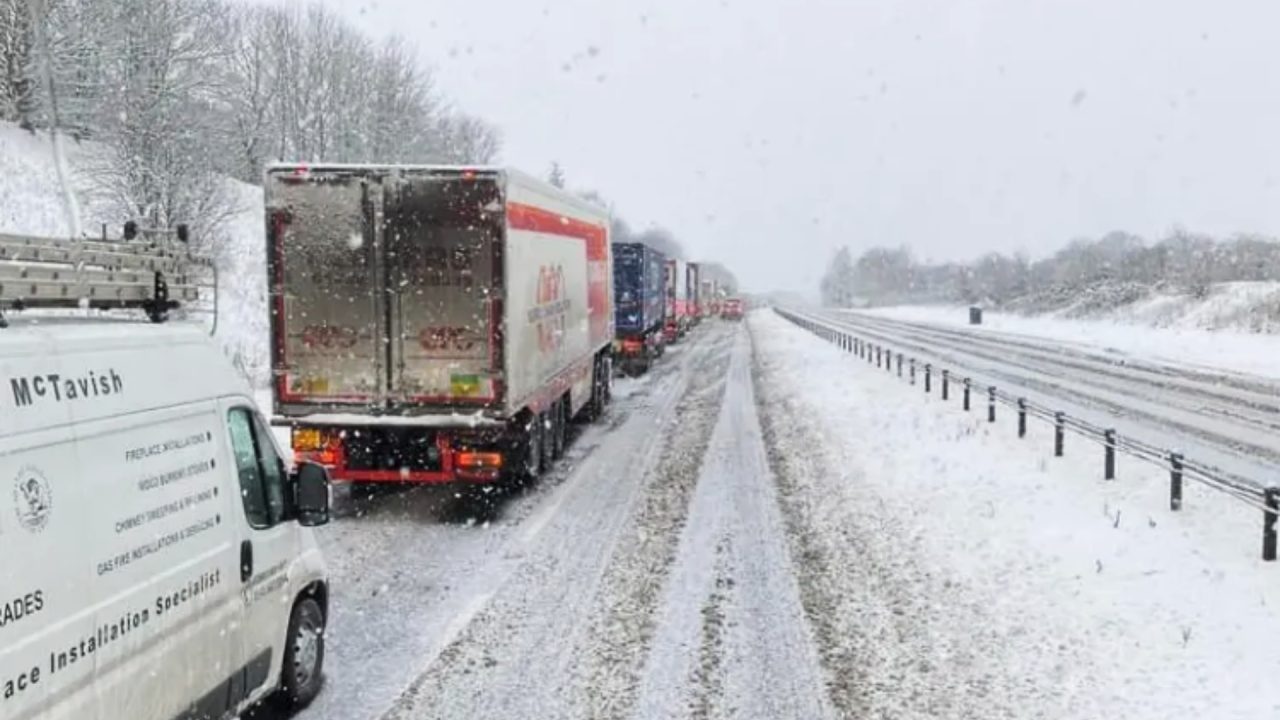 An amber alert for snow has been issued at short notice covering Glasgow and much of the central belt.

Yellow warnings cover an even wider area with wintry weather across much of Scotland on Friday.

Pictures from Falkirk Council’s weather station at Limerigg show the difference 30 minutes of heavy snowfall makes. The photos, from 2021, demonstrate what gritters are facing on the roads this week, the local authority said.

“Congestion caused by vehicles may restrict the emergency services, recovery vehicles and road maintenance vehicles from attending incidents or from clearing roads,” the police advice said.

“No one should ever place themselves at risk on the road and it may be worth making alternative arrangements such as delaying travel until conditions improve or using public transport.”

With no trains running on most of Scotland’s rail network due to strike action, buses have been extremely busy.

Large queues formed at Edinburgh Bus Station on Thursday night with people trying to get home. Travellers reported waiting more than two hours and many left to try and find a taxi instead.

Authorities have urged those who are travelling to prepare their vehicles making sure they have enough fuel and supplies such as warm, waterproof clothing, food and water and to ensure their mobile phones are charged.

Health secretary Humza Yousaf’s visit to the University of Strathclyde Health Technologies Cluster has been cancelled due to the bad weather.

Stranding of some vehicles and passengers is likely, the Met Office warned, with a good chance some rural communities could become cut off.

Power cuts are also expected and other services, such as mobile phone coverage, may be affected.

A broken down HGV caused traffic to build up on the A82 nortbound around the Stoneymollan Roundabout at Balloch.

There has been a one-vehicle crash off the road on the A816 at the B8025 Ford road end.

A crash on the M73 near where it joins the M80 closed a lane northbound earlier on Friday.

There was a crash on the M80 southbound at Junction 4A Mollinsburn shortly before 9.35am.

The M8 eastbound was restricted after a crash shortly before 7am. Emergency services attended the scene and very heavy traffic built up causing delays of more than an hour and 15 minutes.

Vehicles struggled to get across the Erskine Bridge early on Friday morning after a HGV lost traction. Gritters were called to the scene but queues remained heavy.

The M9 was restricted due to a broken down vehicle and severe weather conditions at Junction 11 Keir Roundabout where it meets the A9.

Severe weather is causing very poor conditions on the A9 at Auchterarder.

The M90 heading south of Perth near Junction 10 was restricted due to a broken down vehicle in the snow.

Snowy weather is also making driving conditions difficult on the M90 near Kelty in Fife.

Mid Argyll, Kintyre and Islands Police advised drivers not to travel on the A83 and A85 after reports of vehicles stuck outside Inveraray towards Lochgilphead and the Lochawe area being rendered unpassable.

A snow plough is currently at the Rest and Be Thankful with HGVs in particular are advised to avoid the route.