Thousands of police to receive public order training for COP26

About 10,000 officers from around the UK will be deployed each day of the summit. 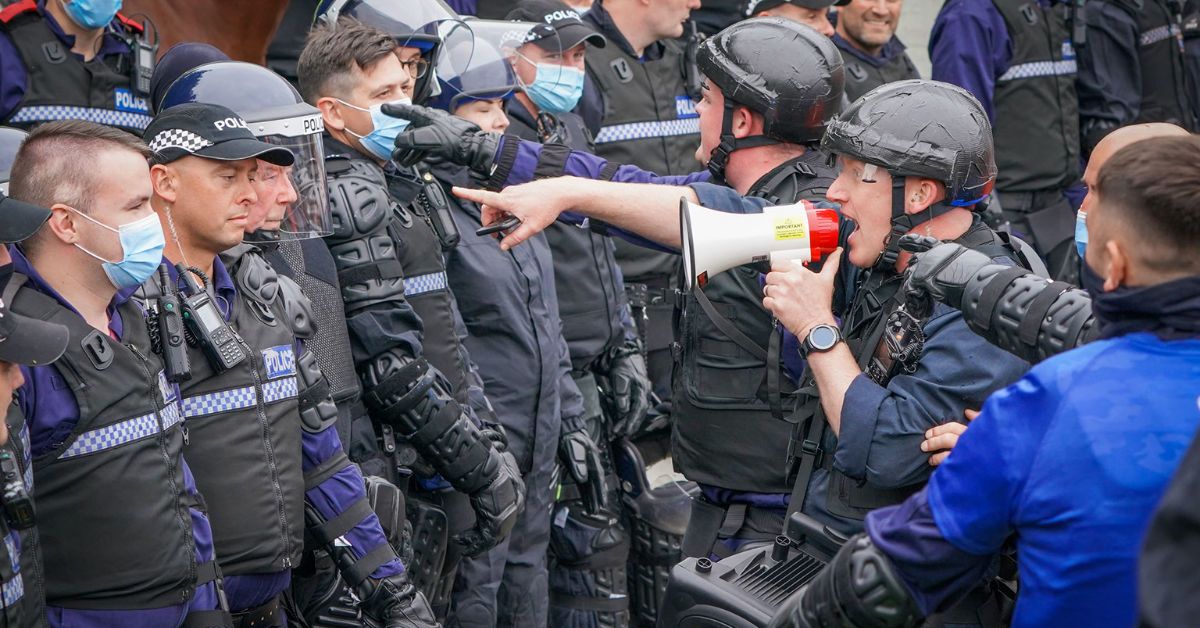 Thousands of officers will receive public order training in the run-up to the COP26 summit in Glasgow, Police Scotland has said.

Specialist training is being given to officers ahead of the international conference in November.

About 10,000 officers from around the UK will be deployed each day of the summit, making it one of the largest policing operations ever undertaken in Britain.

During August and September, roughly 2500 public order officers in Police Scotland will come forward for training.

As part of this, an exercise was held at Cragiehall barracks near Edinburgh on Monday.

Police wearing riot gear were tasked with dealing with a mock protest, with other officers playing the role of demonstrators from a group called “Destruction Uprising”.

The “protesters” took part in a sit-down demonstration outside a bank which began peacefully before becoming more confrontational, with objects being thrown at the line of officers.

Mounted police were also used in the exercise, while the officers moved to disperse the group and use riot shields to defend against attackers with baseball bats.

A group of politicians and campaigners were invited to the training day, with some taking part in the role of police or protesters.

She said: “It’s heavy, it’s warm, I’m covered in egg and all sorts of things.

“But it’s been good to see what it’s like for the police in these sorts of situations.”

She added: “It was quite intimidating – having to eyeball protesters even though it was pretend.”

Police Scotland says it will take a human rights-based approach to policing any demonstrations during COP26.

Leaders from around the world will gather in Glasgow to discuss tackling climate change.

A senior officer said the force was already engaging with protest groups to allow peaceful demonstrations.

Deputy chief constable Will Kerr said: “Police Scotland is a rights-based organisation that puts our values of integrity, fairness, respect and a commitment to upholding human rights at the heart of everything we do.

“This means that we will protect the rights of people who wish to peacefully protest or counter-protest at COP26, balanced against the rights of the wider community.

“We will provide a proportionate policing response to any protests and are already engaging with known protest groups to ensure their rights to peaceful assembly and protest are met.”

He said the police would focus on de-escalation in a demonstration like the one being simulated at Cragiehall.

Mr Kerr told the PA news agency: “What today is about is preparing a greater number of officers in Police Scotland for the small minority who might not want to come and protest peacefully, who might want to disrupt the life of the city and engage in disorder.

“For that small minority we want to make sure we have the fullest range of tactics available.”

Asked if Police Scotland could rule out the use of undercover officers in protest groups, he said: “In the very unlikely circumstances that we would deploy them, the accountability regime in the use of those tactics is incredibly and rightly onerous.”

Quan Nguyen, Scotland coordinator of the COP26 Coalition, which is organising protests in Glasgow, across the UK and worldwide this November, said: “Protest and dissent are vital to a healthy democracy, and are how human rights and justice have always been won the world over.

“Without protest, the political will to act is just not there. The rights to protest, freedom of assembly and freedom of expression are protected rights which the police have a legal duty to defend.

“People must be able to challenge the most exclusionary and least transparent COP ever held, otherwise we stand no chance in tackling the deadly climate catastrophe currently wreaking havoc across the planet.”

He urged people to join the protests for climate justice on November 6.