The First Minister said she is not asking anyone to 'cancel Christmas'. 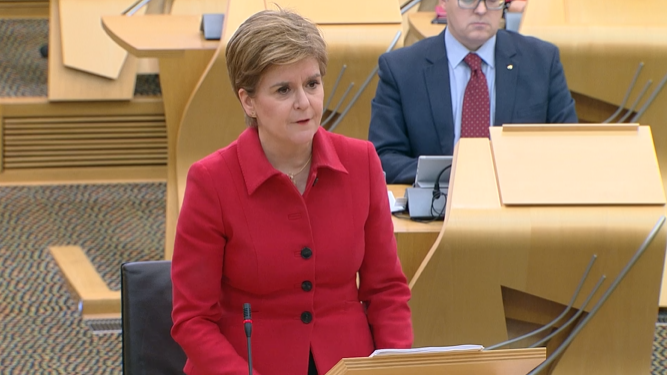 Nicola Sturgeon has asked people in Scotland to reduce contact with people in other households in the “run up to” and in the “immediate aftermath” of Christmas.

In a statement at Holyrood, the First Minister made clear that she is not asking anyone to ‘cancel’ Christmas.

But, she warned of a rapid surge in cases of the Omicron variant across the country – which she said is increasing faster than any previous variant.

Addressing MSPs, Sturgeon indicated that household mixing will not be banned or restricted over Christmas, but said reducing contact with people outside households would help break transmission chains.

“I want to be clear, I am not asking anyone to ‘cancel’ Christmas,” said Sturgeon.

“But in the run up to and in the immediate aftermath of Christmas, I am asking everyone to reduce as far as possible, and to a minimum, the contacts we have with people in other households. I will say more about Christmas Day in a moment.

“We are not banning or restricting household mixing in law as before. We understand the negative impact this has on mental health and wellbeing.

“But we are asking everyone – and we will issue strong guidance to this effect – to cut down as far as possible the number of people outside our own households that we are interacting with just now. This will help break transmission chains.

“So my key request today is this – before and immediately after Christmas, please minimise your social mixing with other households as much as you can.

“However, if you do plan on socialising – either at home or in indoor public places – we are asking that you limit the number of households represented in your group to a maximum of three. And make sure you test before you go.”

The First Minister also said that keeping celebrations “as small as your family circumstances allow” is sensible.

She told MSPs: “Turning to Christmas Day specifically – or Christmas Eve or Boxing Day or whenever you have your main family celebration – we are not asking you to cancel or change your plans, and we are not proposing limits on the size of household gatherings.

“Places of worship will also remain open, with appropriate mitigations. But we will issue guidance to help you make Christmas safer.

“Reducing your contacts in advance of and after Christmas as I have just strongly advised will help do this.

“Keeping your celebrations as small as your family circumstances allow is sensible too. Make sure everyone in your gathering is vaccinated and has done a test in advance.

Guidance on just three households meeting up; legally enforcing working from home; and physical distancing in shops; and cutting crowding at bars.

That all goes much further than what the Prime Minister is struggling to get through at Westminster right now, and here in the Scottish Parliament there was no push-back from any of the opposition parties on any of these new measures at all. And no mention of Covid passports, the thing that is causing the most controversy in the House of Commons.

The level of Christmas party cancellations after last weeks guidance from Public Health Scotland shows that people are paying attention and willing to go along with alot of this. Some support for that sector today, with the promise of more to come from the Treasury.

But there were other things in this statement today – only two households visiting care home residents, only two people visiting hospital patients, putting the flu vaccine on hold to focus on Covid boosters.

I think the main line from the First Minister today was right at the end where she said “although it is guidance, please do not think of it as optional”.

That is Nicola Sturgeon eyeballing the people of Scotland and saying this is what you have to do to make Christmas happen and stop the spread.