Health minister Jeane Freeman attended and said those present are ‘expecting an outbreak’.

Nicola Sturgeon has chaired a Scottish Government resilience meeting as preparations for a coronavirus outbreak in Scotland accelerate.

The First Minister led the meeting to discuss preparedness in Scotland, following outbreaks in northern Italy and elsewhere.

Health minister Jeane Freeman was among those in attendance and said those present are “expecting an outbreak and are working hard to ensure we have plans in place to contain it as best we can”.

Her comments came after Scotland’s chief medical officer said people could be banned from gathering in large numbers to contain the spread of the virus, known as Covid-19, if it hits Scotland.

As of Tuesday afternoon, 412 people had been tested for the virus in Scotland, and all returned negative results.

Across the UK, 13 people have been confirmed to have the virus from 6795 patients tested.

Ms Freeman said: “Though the risk to individuals remains low, and all test results have come back negative so far, the chief medical officer has advised that it is highly likely that we will see a positive case in Scotland as coronavirus continues to spread.

“We are expecting an outbreak and are working hard to ensure we have plans in place to contain it as best we can. The NHS and Health Protection Scotland have an established plan to respond to anyone who becomes unwell.

“Scotland is well-prepared for a significant outbreak of coronavirus but there is currently no treatment or vaccine. Therefore, preventing the spread of any outbreak will be vital, and the Scottish Government is working closely with NHS Scotland and Health Protection Scotland to ensure this.

“We have a proven track record of dealing with challenging health issues and have public health and infectious disease experts working intensively on these issues.

“The public also has a vital role to play in helping us contain any outbreak by following the latest health and travel advice, and following basic hygiene precautions, such as washing hands and covering their nose and mouth with a tissue when coughing or sneezing.”

Scotland’s chief medical officer Catherine Calderwood said the Government and NHS were working on “containment first” and then – if coronavirus was discovered in this country – a range of measures to try to limit the number of people infected.

“If we do have a cluster, as has happened in Italy, then we move into delaying the spread,” she said.

“Delaying the spread would mean some of the measures that have happened already in Italy – stopping people coming together in large groups so that one or a few individuals do not spread to many, many more around them.”

In Italy, Serie A football matches are being played behind closed doors, church services in the affected regions have been cancelled and Milan’s famous opera house, La Scala, has temporarily shut.

She added: “We have been planning now for many weeks for the inevitability of any case in Scotland and that preparedness has started with our NHS, but we now have stepped up our Scottish Government resilience unit so that we have plans put in place for across all of our country beyond our healthcare system.”

On Tuesday morning, the UK’s health secretary Matt Hancock said official advice has been changed to say those who have been to northern Italy – north of Pisa – should self-isolate if they have flu-like symptoms.

In Italy, 229 people have tested positive for the virus and seven have died, with police manning checkpoints around a dozen quarantined northern towns.

Health regulations in Scotland have been updated, requiring doctors to inform health boards about any cases of the disease. 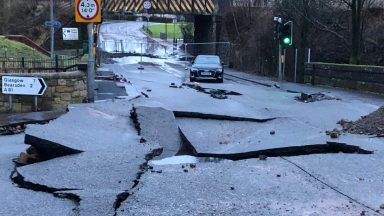 Water restored to around 250,000 customers after burst pipe