Building were destroyed and vehicles hit by trees during the storm which also left passengers stranded on a train for 17 hours. 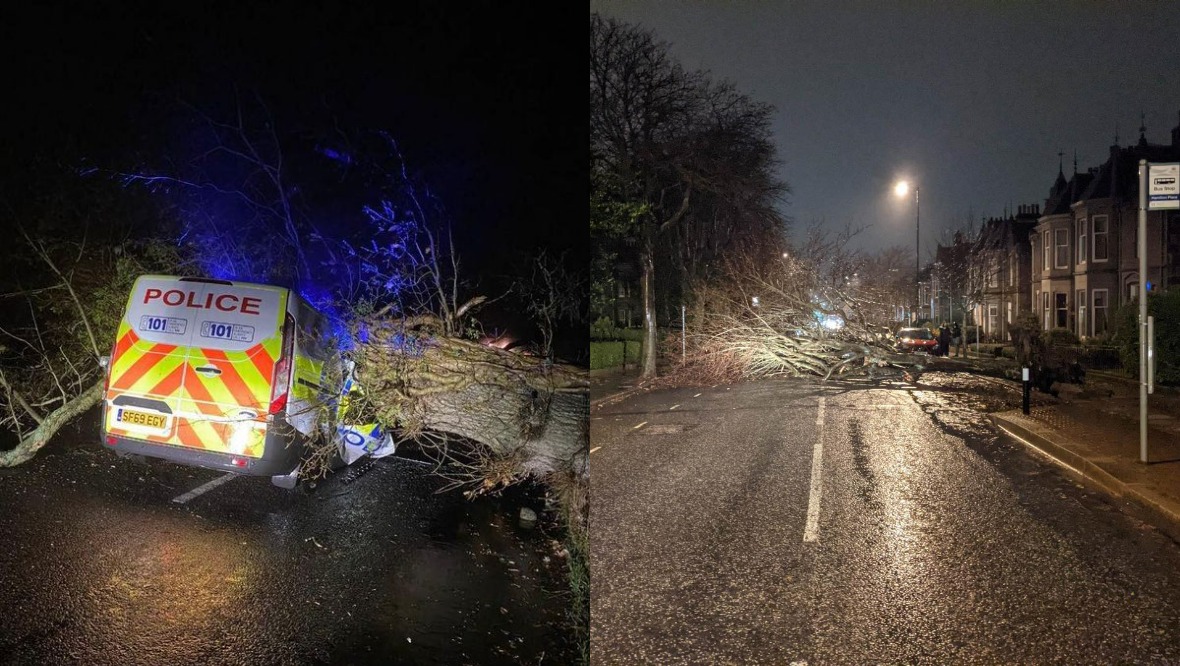 Transport services in Scotland were thrown into chaos and more than 100,000 homes were left without electricity as Storm Arwen battered parts of the country.

The Met Office issued a rare red weather alert for wind from Friday at 3pm until 2am on Saturday, warning some areas could see gusts reaching 80mph to 90mph.

An amber weather warning for wind remains in place for the Highlands, Central Belt, including Edinburgh, Grampian and Orkney and Shetland until Saturday morning.

A yellow weather warning highlighting a risk of ice has been issued overnight into Sunday.

At least two people have died as the storm swept through the UK due to falling trees in County Antrim, Northern Ireland and Ambleside in Lancashire.

Photos on social media showed the significant damage that many parts of the country have suffered as a result of the storm.

Scottish and Southern Electricity Networks (SSEN) said more than 100,000 customers were out of power. The main areas affected are Aberdeenshire, Angus, Perthshire and the Moray Coast.

The utility firm has managed to restore power to a 40,000 homes affected by the storms but warned the weather was severely hampering its work.

Mark Rough, director of customer operations at SSEN, said: “Storm Arwen has brought some of the most severe and challenging weather we have experienced in recent years, resulting in significant disruption across the north of Scotland.

“Despite detailed preparations, the prolonged and severe nature of the weather front has hampered efforts to restore supplies, with the high winds expected to continue until the early hours of the morning. We therefore expect many customers to remain without power into tomorrow, particularly in the Aberdeenshire area.

“We would like to apologise to all our customers who have experienced a loss of supply and would like to reassure them that our teams are working hard to prioritise faults and carry out repairs at the earliest opportunity. To support restoration efforts, we have helicopters on standby to monitor the network for damage from first light tomorrow morning.

“We continue to prioritise proactive contact to our customers on our Priority Services Register to offer extra support where required and I’d encourage anyone concerned to give our dedicated teams a call on 105, where we can provide additional support and guidance.”

A train was stuck at Huntly railway station overnight, with dozens of passengers left stranded for around 17 hours.

One passenger told Fubar News: “Currently stuck on a train in Huntly. I personally have been on this thing for over 17 hours now.

“Many people on here have been on more. Staff onboard have been excellent. They managed to do an Asda run for water, sandwiches, snacks etc. Somehow even managed to source a kettle for tea/coffee. Also arranged for a local baker to bring down bacon rolls and fresh pies.

“Staff on board have been sharing what little info they get when they can. We were informed that a bus was coming from Inverness (no other companies were willing to take the risk) but that is also subject to road conditions.”

Rod Dennis, of RAC Breakdown, said those living in areas covered by amber weather warnings should consider postponing their planned trips until the storm passes.

Network Rail Scotland (NRS) confirmed services in the north from Aberdeen to Inverness and Aberdeen to Dundee had to be closed on Friday night due to fallen trees and debris on the lines.

The east coast line between Edinburgh and Berwick-upon-Tweed and the North Berwick line have also had to close due to the extreme weather.

On Friday evening Karl Grewar, head of integrated control at NRS, said the lines were closed for safety reasons and will not reopen “until it is safe to do so”.

“We will be doing everything we can to open the lines as soon as we’re able to get people moving,” he said.

CalMac Ferries confirmed multiple services had to be cancelled due to the extreme wind causing dangerous sailing conditions at sea.

Part of the A1 in East Lothian, between Haddington and the Thistly Cross roundabout, had to close because of 84mph winds forecast for Friday evening.