An extended yellow weather warning from the Met Office is in force with concerns of dangerous conditions. 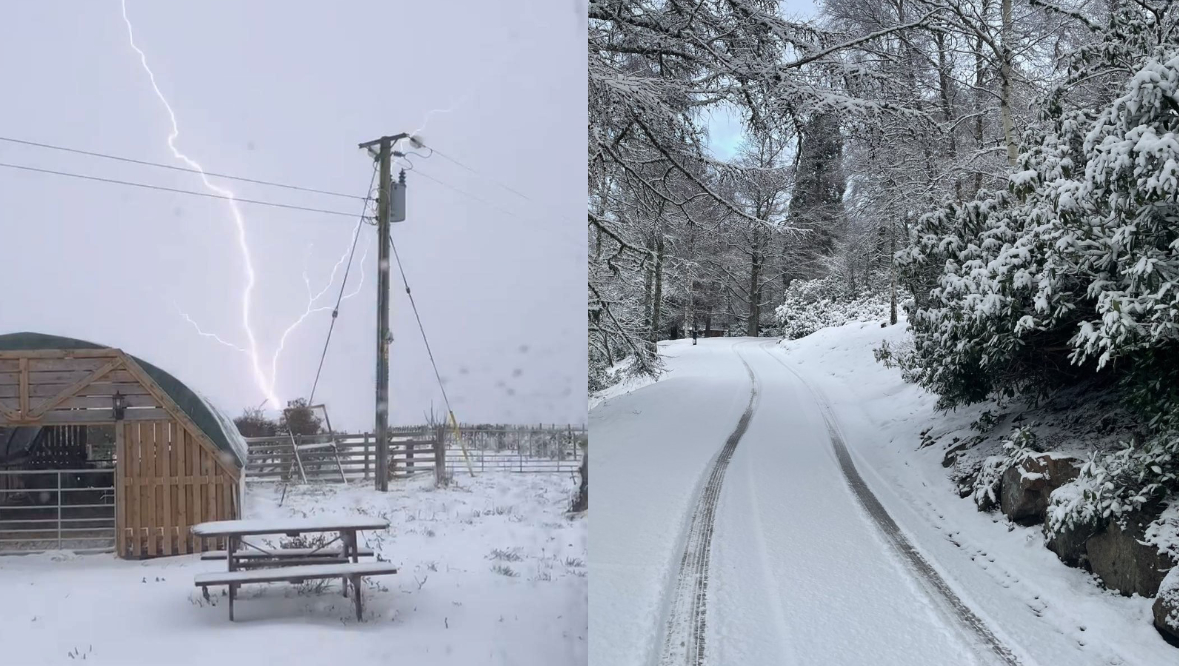 An extreme weather warning has been extended after heavier than expected snowfall and icy conditions in parts of Scotland.

A yellow weather warning from the Met Office is in force with concerns that dangerous conditions could cause disruption and injuries.

All of Scotland, north of the Isle of Mull, and Fort William in the west and Montrose in the east, will be affected by the extended snow and ice warning in force from midnight on Thursday until midday on Sunday.

This week is expected to be the coldest in December in Scotland for nearly a decade, with lows of -10C in some areas.

“Over the next few days it’s staying cold for Scotland and the risk of snow continues,” said STV weather presenter Philip Petrie.

“Low pressure to the east of us will slowly sink southwards, changing the direction of our airflow from a bitterly cold northerly, to a north-westerly.

“So, at the moment it’s eastern areas bearing the brunt of the snow showers, but the change in wind direction will give more shelter through Friday and Saturday with the focus of the showers shifting to the north and west.”

READ MORE: How can you prepare for snow blizzards and ice cold Arctic air?

Traffic Scotland warned morning commuters of difficult driving conditions in the north on Thursday morning, as multiple reports of vehicles getting stuck in the snow or skidding on icy roads began to pour in.

Schools in the Highlands and the Grampian region were also closed following the overnight showers.

A statement by Gairloch High School asked pupils to continue their work over Google Classroom where available, and requested guardians check back in on Friday to see if the school will reopen.

READ MORE: La Nina and the coldest December across Scotland for years

In Stonehaven, traffic was brought to a standstill on the A90 after multiple vehicles became stuck.

Snow gates on the A93 between Braemar and Glenshee were closed after heavy snowfall, as were those between Tomintoul to Cock Bridge on the A939.

Commuters on the A96 in Keith were also met with adverse conditions, with reports of multiple vehicles slipping and getting stuck.

First Aberdeen said all of its bus services in the city were disrupted “due to heavy overnight snow and a lack of snow gritters”.

Stagecoach announced that its X7 service between Aberdeen and Dundee, which was due to depart at 8.05am on Thursday, was cancelled due to the conditions.

Edinburgh was also treated to some snowfall, although lighter than was seen in the Highlands and Grampian region.

One social media user reported heavy showers in the Stockbridge area, while another shared some images of the scenes in Saint Andrew Square.

Glasgow police have issued warnings to motorists after an uptick in vehicles stolen while left defrosting.

The division reminded drivers to “never leave your car unattended with keys in it, thieves could steal it in seconds”.

Two buses on Aberdeen’s Scotstoun Road were affected by slippery conditions, after one went off the road and the other jack-knifed on the same stretch of road.

A Police Scotland spokesperson said: “We were made aware shortly after 9.30am, a gritter attended and traffic is now flowing again.”

STV meteorologist Sean Batty said on Wednesday it was shaping up to be a significant spell of severe cold conditions, and some areas could experience their coldest December weather for several years.

He said overnight temperatures may drop as low as -7C in Lanarkshire, Glasgow and Renfrewshire at the weekend, which would make it the coldest December conditions since 2017 when Bishopton hit a low of -8C.