Six things you didn't know could land drivers with a fine

Police are launching a crackdown on careless driving to reduce the number of incidents on Scotland's roads. 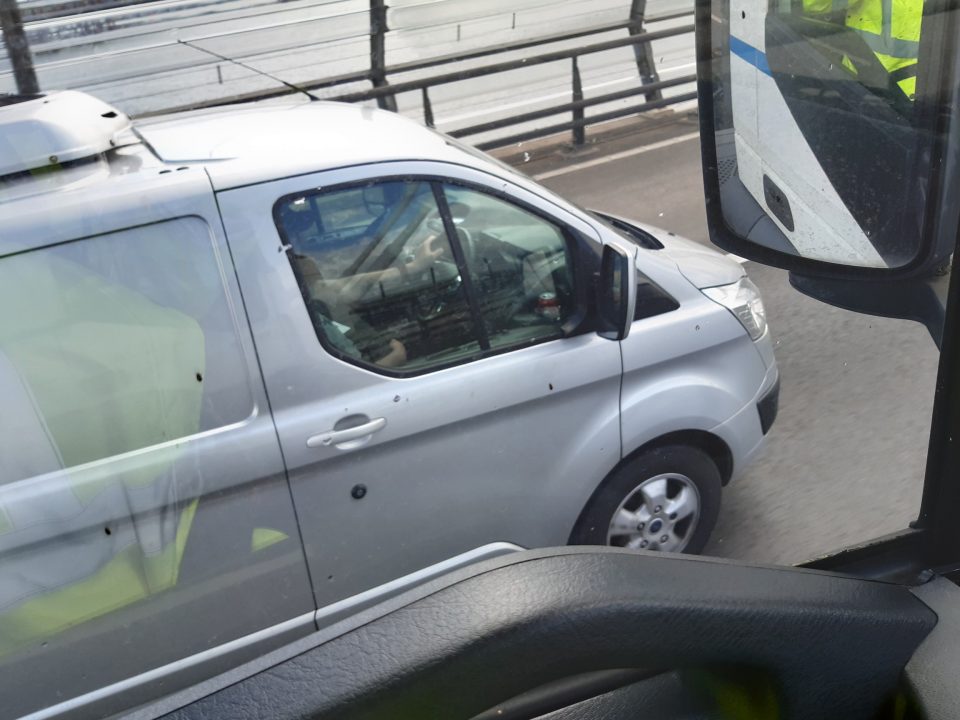 Motorists caught using their mobile phones or eating at the wheel face tough penalties as part of a new crackdown on careless driving.

Operation Tramline is a policing initiative designed to help make the roads safer by targeting dangerous drivers and reducing the number of incidents on Scotland’s motorways.

Police said 36 drivers have been given warnings for various offences over the past two weeks, with 85 offences being reported, including 47 drivers for using their mobile phone. Drivers have also been dealt with for not having insurance and speeding.

In one incident, a 23-year-old woman seen driving in lane two of the M90 Queensferry Crossing eating cereal from a bowl as she drove southbound. She was fined £100 and had three points added to her licence.

So here are five things drivers probably didn’t know could land them in trouble.

There isn’t a specific law for what you can or can’t wear behind the wheel. However, Rule 97 of the Highway Code states: “The clothing and footwear you choose to wear whilst you are driving must not prevent you from using the controls in the correct manner.”

The RAC advise drivers not to wear shoes with more than 10mm thickness in the sole, a sole that’s too soft or thin, shoes that are too heavy and those that limit ankle movement. They also recommend that shoes have enough grip to ensure your feet don’t slip off the pedals, and they’re narrow enough not to accidentally press two pedals at once.

Motorists are breaking the law if they use a handheld device for any reason while driving, even if it is offline or in flight mode. RAC explain the rule change in March helped close a common loophole used by dangerous drivers to escape conviction.

This applies if a driver is stopped at traffic lights, waiting in traffic, supervising a learner driver, or using a car that has a start/stop engine when you’re not moving.

If the driver is caught, they can get up to six penalty points and a £200 fine and could lose their licence if they passed their driving test within the last two years. Offenders can also be taken to court where they can be banned from driving and receive a maximum fine of £1,000.

Drivers must be cautious parking at night to ensure other road users can pass safely. Rule 248 in the Highway Code states: “You must not park on a road at night facing against the direction of the traffic flow unless in a recognised parking space.”

It adds: “All vehicles must display parking lights when parked on a road or a lay-by on a road with a speed limit greater than 30mph.”

Drivers could be hit with a £1,000 fine if in breach of these rules.

The Highway Code is clear on use of the car horn only to alert other road users of your presence, of imminent danger and while your car is in motion.

Rule 112 of the Highway Code states: “Use only while your vehicle is moving and you need to warn other road users of your presence. Never sound your horn aggressively. You MUST NOT use your horn while stationary on the road or when driving in a built-up area between the hours of 11.30pm and 7am except when another road user poses a danger.”

Police can issue a £30 penalty notice for road rage or illegal use of the horn. If you challenge the decision and lose in court, you could be subject to a £1,000 fine.

It is illegal to drive through a puddle and splash someone with a car.

Section three of the Road Traffic Act 1988 reads: “If a person drives a mechanically propelled vehicle on a road or other public place without due care and attention, or without reasonable consideration for other persons using the road or place, he is guilty of an offence.”

The Crown Prosecution Service also specifies “driving through a puddle causing pedestrians to be splashed” is an offence.

Motorists caught by police could be hit with a £100 fine and three penalty points. If police deem the motorist is was driving in a manner that “amounts to a clear act of incompetence, selfishness, impatience, and aggressiveness” then the maximum punishment of a £5,000 fine could be given.

They could also be forced to pay the maximum £5,000 fine if the case is taken to court.

There is not a direct penalty for unrestrained pets, but it is vital to restrain them properly. The risk is that you could be charged for driving without due care if the animal distracts you.

Rule 57 in the Highway Code reads: “When in a vehicle make sure dogs or other animals are suitably restrained so they cannot distract you while you are driving or injure you, or themselves, if you stop quickly. A seat belt harness, pet carrier, dog cage or dog guard are ways of restraining animals in cars.”

Any drivers who break the rule could receive a £100 on the spot fine if they are seen to be distracted. However, failure to pay this fine could result in a court case and a maximum fine of £5,000.