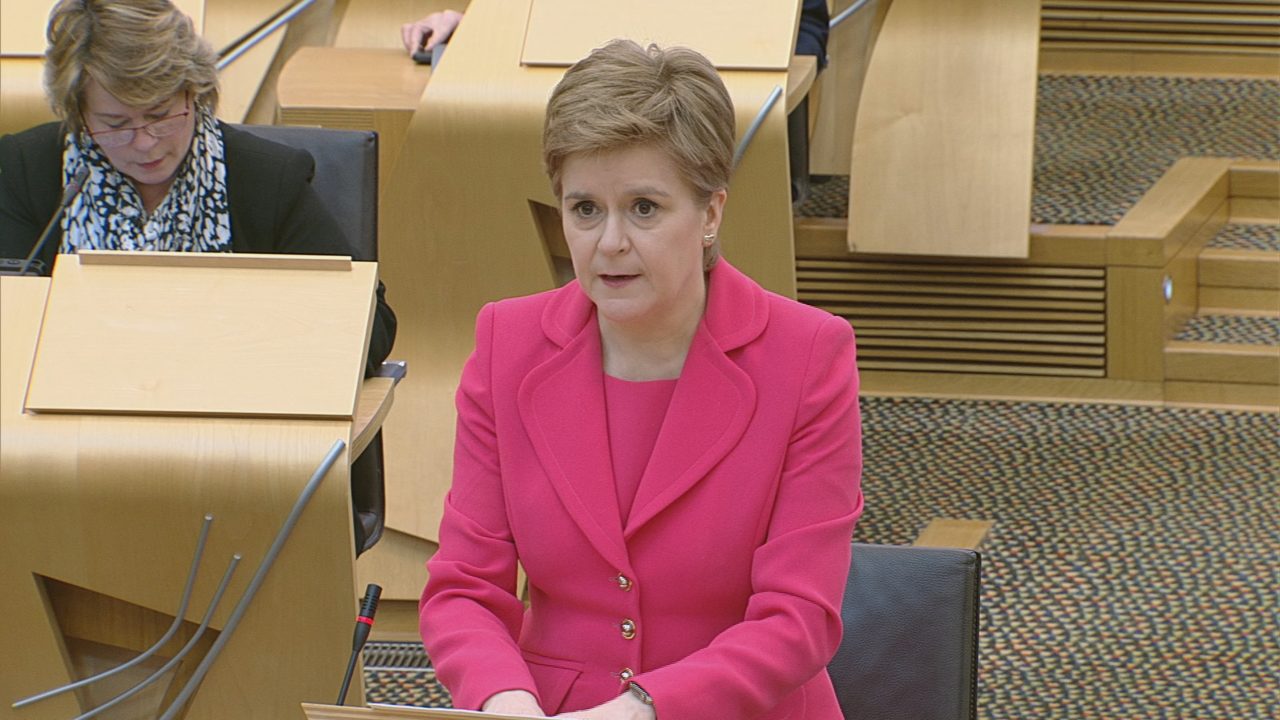 Party leaders at the Scottish Parliament have unequivocally condemned Vladimir Putin over the Russian invasion of Ukraine.

First Minister Nicola Sturgeon insisted that the Russian leader must now face the “severest of consequences” in light of his decision to launch military action.

Prime Minister Boris Johnson has meanwhile vowed that Britain “cannot and will not just look away”.

Addressing Holyrood on Thursday ahead of FMQs, Sturgeon condemned the unprovoked aggression of Putin in the “strongest possible terms”.

She told MSPs: “Parliament will discuss the unfolding situation in Ukraine later and express its solidarity with a country whose very existence as an independent democracy is now under attack.

“However, at this first sitting since Russia’s full-scale invasion, I wanted to condemn in the strongest possible terms the unprovoked, imperialist aggression of Vladimir Putin.

“There can be no doubt that he must face the severest of consequences – sanctions on him and his network of oligarchs and agents, their expulsion from countries across the world.

“And here in the UK, immediate clean-up of the swirl of dirty Russian money in the city of London.”

Sturgeon told MSPs that the world must help and equip Ukraine to resist Russian aggression.

She said: “Just as Putin must face and feel the wrath of the democratic world, the people of Ukraine must feel, and not just hear, our support and our solidarity.

“The world must now help and equip Ukraine to defend itself and resist Russian aggression.

“We must ensure humanitarian aid and assistance, and we must all stand ready to offer refuge and sanctuary where necessary for those who may be displaced.”

In a stark message, the First Minister explained that historical precedents will be set in the “hours and the days to come”.

She told MSPs: “This is a critical juncture in history, perhaps the most dangerous and potentially defining moment since the Second World War.

“We live in this moment, but it is true to say that historic precedents will be set in the hours and the days to come.

“These will determine the new norms of what is acceptable or not in our international order.”

“We must all ensure that freedom and democracy prevail.”

Sturgeon said that beneath the “veneer of power” exhibited by Putin lies “insecurity and fear”.

“Putin is an autocrat. His control of the apparatus of state and of the economy, the military and the media, can make his power seem impregnable,” she said.

“But, as with most strong-men leaders, underneath the veneer of power lies insecurity and fear.

“Fear of democracy, of freedom, fear of the kind of popular uprisings witnessed over recent years in Ukraine ever happening in Russia.

“And on that point, let us not assume that he is now acting in the name of the Russian people, we must ensure that anti-Putin forces within Russia have our encouragement and moral support too.”

She added: “Future generations will judge the actions the world takes in this moment. There are of course many complexities, but at its most fundamental, this is a clash between oppression and autocracy on the one hand, and freedom and democracy on the other.

“We must all ensure that freedom and democracy prevail.”

Scottish Conservative leader Douglas Ross joined the condemnation of the actions taken by Russia as he said “we stand with the people of Ukraine”.

“The world we woke up to this morning is a far darker and more unstable place than when we went to sleep last night,” he told MSPs.

“The pain of war is felt by people. Families will lose loved ones, whole communities will be displaced, children will be left with lifelong scars, both physical and mental.”

Ross added: “I always thought and hoped that war on this scale in Europe was something I would only know of through history lessons at school.

“But sadly after this morning, it is part of our daily lives once again.”

Scottish Labour leader Anas Sarwar called for the “hardest possible sanctions” to be taken against all those linked to Putin.

He said: “Today, a hard won and fragile peace in Europe has been shattered. It is a dark day and my party and I stand in solidarity with the people of Ukraine.

“Vladimir Putin’s attack on Ukraine is unprovoked and unjustifiable. Across the world today, the message is clear – peace and democracy must prevail and we will not bend to Vladimir Putin’s ambitions.”

Sarwar added: “The message from this parliament must be loud and clear – we stand in solidarity with the people of Ukraine. Peace will prevail, Vladimir Putin will pay a heavy price.”

Scottish Greens co-leader Patrick Harvie offered his party’s solidarity with the people of Ukraine amidst the crisis.

He told MSPs: “Today’s escalation of a Russian invasion that started in 2014 is a flagrant and grievous breach of international law, one which must be responded to in the most comprehensive terms.

“No form of sanction should be off the table. Action against Russian-state backed corporations and other entities must be swift, and here in the UK, it’s essential that we tackle the money laundering networks used extensively by Russian elites.”

Harvie added: “Let us all hope, even at this hour, that a prolonged war can be prevented. The devastation that would bring does not bear thinking about.

“We are proud to stand with the people and government of Ukraine, and I am very pleased that that message is coming from the entire Chamber.”

Scottish Liberal Democrat leader Alex Cole-Hamilton said it is very likely that the invasion will leader to a “catastrophic and wholly needless loss of human life”, as well as displacing thousands of Ukrainians.

He said: “We woke this morning to a much darker world. A few hours ago, and for the first time this century, a land war has begun in continental Europe and we have no idea how this will end.

“The Russian regime has violated the sovereignty of a democratic state, they have broken international law and they have threatened the very fabric of peace and security in our world.”