Scottish Government to 'impose' pay deal on nurses despite rejection

The Royal College of Nursing accused the health secretary of 'ignoring' the voice of members by pressing ahead with the pay deal. 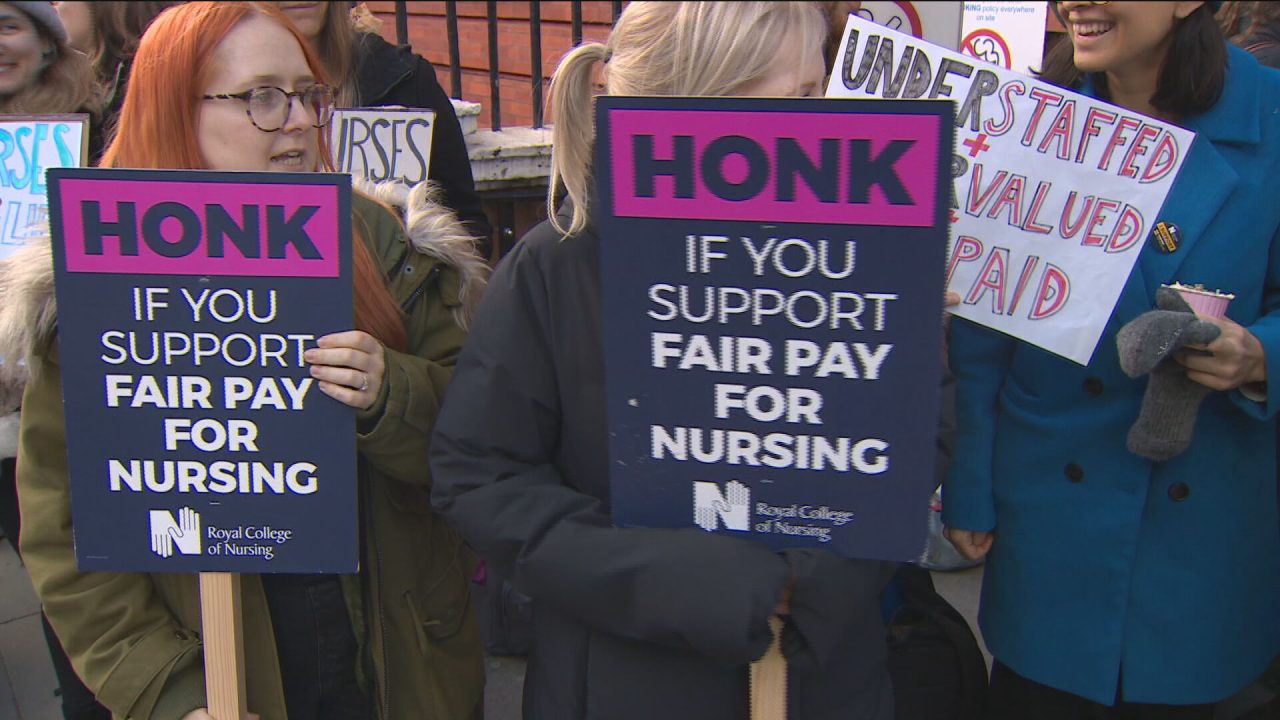 The Scottish Government is to “impose” a wage rise on nurses after talks between the health secretary and union bosses ended without an agreement.

The Royal College of Nursing (RCN) accused Humza Yousaf of “ignoring” the demands of members by pressing ahead with a 7.5% increase to pay packets.

The move comes despite more than 80% rejecting the offer in a consultative ballot earlier this week.

Members of the GMB and Royal College of Midwives unions also rejected the deal, however Yousaf insisted he remained committed to “meaningful discussions” over a new agreement.

The deal offered pay rises ranging from £2,205 to £2,751 – which ministers said meant NHS workers in Scotland would remain the best paid in the UK.

The lowest paid staff would get a rise of 11.3%, with an average increase of 7.5% but RCN Scotland director Colin Poolman branded it a “real-terms pay cut”.

He added: “Our members will be furious that for the second year in a row the Scottish Government has chosen to ignore their voice.

“There is no doubt that our members are long overdue a pay increase for this year, but this is not the Christmas present they deserve. For the second year in a row, the Scottish Government is ignoring them and imposing what is a real-terms pay cut.

“Mr Yousaf says that he is open to continuing discussions with the RCN to try to avert strike action, but any further talks must be meaningful.

“The pay offer is not what is needed to recognise our members’ safety critical role, stop nursing staff leaving the profession or attract the nurses of the future.

“We will continue our planning for strike action in the new year and early in January we will announce dates for historic strike action in Scotland. Our members do not want to go on strike but years of being ignored and understaffed have left them with no alternative.”

The threat of strike action looms from the unions who rejected the pay offer in the new year, with the Health Secretary saying he was committed to avoiding the historic walkouts.

Scottish Labour’s Jackie Baillie has accused the health secretary of “planning to impose the offer all along”.

However, Yousaf said the move was necessary as he had “nowhere else to go in terms of a monetary package”.

“We believe it is right to get additional money into the pay packet of NHS staff in the midst of a cost of living crisis. NHS staff need the certainty of a pay uplift in this financial year, and I can only do this by implementing the deal now.

“This deal is the biggest since devolution, represents an investment of over half a billion pounds and ensure our hard working NHS staff remain the best paid in the UK.”

Yousaf added: “I am absolutely committed to meaningful dialogue with Trade Unions in order to avert strike action and am prepared to meet throughout the Festive Period to continue that dialogue.

“I need to be upfront and honest that I have no more money for pay in 2022/23, however I am keen to discuss how we make progress on significant non-pay issues that are important for the sustainability of the workforce, and also how we make early progress on next year’s pay deal.”

Scottish Conservative shadow health secretary Dr Sandesh Gulhane MSP said: “This is a deeply worrying development which points to a complete breakdown in trust between the nursing unions and Humza Yousaf.

“It was bad enough that these talks were delayed 24 hours because the health secretary considered voting on the SNP’s rushed GRR Bill to be more important than averting strikes in our NHS.

“But the fact that the talks ended so abruptly this morning suggests Humza Yousaf went into the room in bad faith and with no credible alternatives to offer the unions.

“He has presided over an ever-deepening crisis in our health service due to his desperate mismanagement, and this is further proof that he is hopelessly out of his depth.

“It’s time for Nicola Sturgeon to immediately restart negotiations herself with the unions to prevent these potentially catastrophic strikes going ahead.”