Sally Jenkins, from Kinross, is terrified for Anatasiia and Dasha's safety during the wait for their visas to be approved. 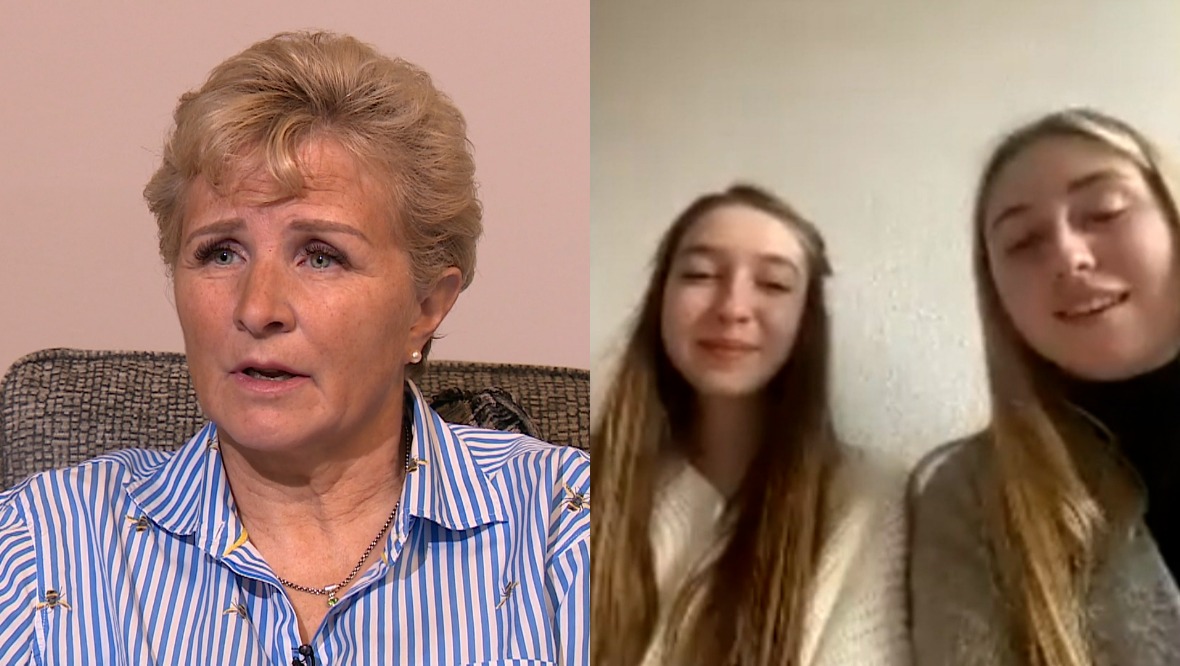 Sally Jenkins, along with her husband, is opening her Kinross home to Dasha and Anastasiia, whose parents are in the Ukrainian military.

Ms Jenkins told STV News she is terrified for their safety during the wait for their visas to be approved.

Anatasiia and Dasha’s mother had told them to leave Ukraine to be safe in the UK.

The 23-year-old and 17-year-old crossed the border into Poland, while their parents stayed behind to fight in the war.

But after being targeted by sex traffickers they fled to Germany, and now the house they’ve been placed in has left them fearing for their safety once again.

Dasha said: “Those families consist of almost only men.

“Everyday we hear loud screams and that’s really scared us.

“So we just sit in our room.

“We can’t go out because we don’t want to conduct with them.”

“We can’t explain to the German Government why we feel uncomfortable here and explain what we need.

“So we are just sitting here.

“Just sitting and waiting but we don’t know what we’re waiting for.

“Our parents last words were one dream from them is we must be safe. For us to be safe.”

Ms Jenkins applied to help the girls through the Homes for Ukraine Scheme.

After hearing no updates about their visas, she contacted her MP John Nicolson to see if he could find out more.

She said: “They said they revoked it because Dasha’s a vulnerable teenager and shouldn’t be travelling on her own.

“She should be travelling with her parents.

“Now, she’s not travelling on her own she’s travelling with her elder sister Anastasiia who is 23 years old and is very responsible and adores her sister.

“We don’t know if Anastasiia’s visa has been done.

“I’ve heard nothing from the government.”

The MP for Ochill and South Perthshire responded: “The Home Office controls visas there is a hostile environment and huge gulf between what they day they want, which is to give sanctuary to Ukrainians and what they actually deliver, which is an enormous backlog.

“The UK home office has got to get its act together and deliver for people who need to leave Ukraine.”

The UK’s refugees minister Lord Harrington insisted that “great progress” is being made in issuing visas to Ukrainians coming to the UK.

“The generosity of the UK public in offering up their homes to help Ukrainians fleeing Putin’s vicious invasion has been incredible,” he said.

“The latest data shows we have made great progress, with around 56,500 visas issued through the UK government’s Ukraine schemes.

“With more than 3500 visas processed per day in the last few days, we are on our way to achieving my ambition of processing cases in 48 hours.

“However we are not complacent, we have already made a raft of changes and will be making more to simplify the visa process even further, helping thousands more Ukrainians come to the UK through these safe and legal routes and away from the atrocities being committed in their homeland.”

While the girls wait to come to Scotland, they know that a mother’s love knows no borders.