First Minister says there is 'real and immediate concern' over closure of border due to coronavirus fears. 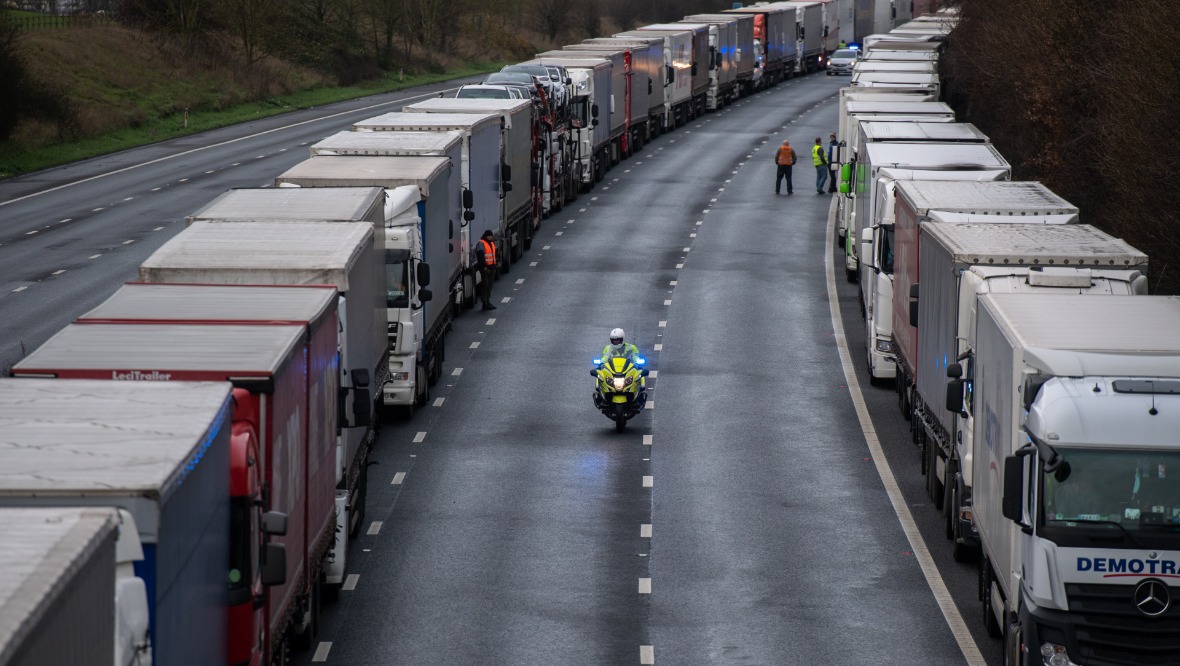 The situation facing Scottish food exporters is “rapidly deteriorating” as thousands of lorries remain stuck at the Port of Dover and Eurotunnel.

First Minister Nicola Sturgeon told parliament the situation is serious and could lead to some pressure on fresh produce in the days after Christmas if it is not resolved in the “next day or so”.

France has closed its border to lorries crossing the Channel due to fears about the mutant variant of coronavirus, leading to almost 3000 HGVs being trapped in Kent.

Sturgeon said: “This situation is serious, it is urgent, and for our food exporters it is rapidly deteriorating. It needs the UK Government to reach agreement with France without delay to get freight moving again; there is simply no time to lose.

“We have no concerns about medicine supplies at this stage but that was something covered in detail – both at Cobra and at the Scottish Government resilience committee yesterday – and we also have no immediate concerns about food supplies.”

The First Minister said supermarkets are well stocked and warned there is no need for anyone to buy more than planned in the run-up to Christmas.

But she said there were real and immediate concerns about the impact on Scotland’s food exporters, especially the seafood sector.

“This is the peak time of year for seafood exports and the Christmas export trade is now almost certainly lost; that is devastating for our world-class seafood businesses and they do need, and will get, our support,” she said.

“We are liaising with the sector on the need for immediate financial support and I also raised the issue of compensation at Cobra yesterday. However, what the sector needs most of all is for the UK Government and France to agree a protocol to get freight moving again without delay.

“If that doesn’t happen almost immediately the sector stands to lose its New Year export trade too.”

Talks between the UK and France to resolve the crisis at the Channel have included discussions on testing HGV drivers.

The EU’s recommendation suggested rapid tests should be used to avoid disruption.

Sturgeon said the Scottish Government stood ready to help with testing “in any way we can”.

“Since any solution is likely to include mass testing of freight drivers, that willingness to help includes a willingness – if the terms of the agreement allow – to provide testing facilities for our sector here in Scotland.”

Brussels called for co-ordinated action by the EU’s 27 states in relation to the UK’s coronavirus variant, with travel bans discontinued.

More than 40 countries around the world have banned flights from the UK due to the mutant variant of coronavirus, which spreads more readily than previous strains.