ScotRail has been nationalised by the Scottish Government. 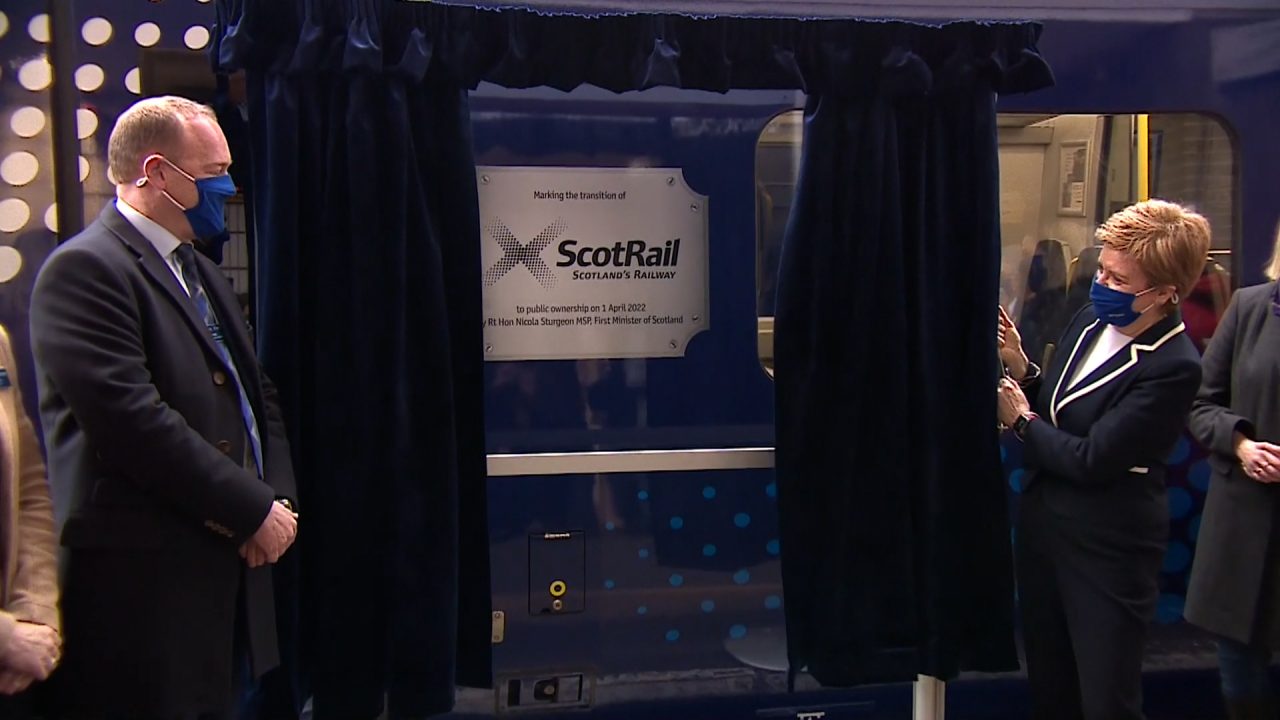 Scotland’s railway is now under public ownership after being nationalised.

From April 1, ScotRail will be run by a new ‘arms-length’ Scottish Government company.

It brings to an end the tenure of Dutch firm Abellio, who had held responsibility for seven years.

Abellio’s contract to run ScotRail was ended early after criticism over its performance levels.

Speaking at the launch on Friday, First Minister Nicola Sturgeon told STV News: “I think this is a very significant moment.

“The railways have been privatised for a quarter of a century.

“Many people thought that was the wrong move back then, many people have held to that view.

“So after all that time, today marks the return to public ownership of Scotland’s railway, and I think that is a significant milestone and a really important moment.”

The FM added: “Initially, as you would expect, the focus is on ensuring that passengers have continuity and reliability of services.

“So we need to work through all of the implications of that.

“Beyond that, the transport minister will lead a national conversation in the spring and that will be looking at the concrete improvements people want to see.

“A fair fares review will be part of what we take forward.

“The principle of public ownership and the public accountability that comes with that obviously is important but this is very much about delivering a railway that meets the expectations of the travelling public.”

Rail unions have called on the Government to commit to expanding jobs, as well as protecting ticket offices and services.

A Transport Scotland spokesperson explained that nationalisation of the service brings the opportunity to deliver a railway “for the benefit of the people of Scotland”.

“Bringing ScotRail passenger services under public control and ownership puts passengers and staff at the heart of Scotland’s rail services,” they said.

“It’s a historic occasion and one that marks a key milestone in our ambitious Programme for Government to support a greener, fairer Scotland.

“This is an opportunity to deliver a railway which is for the benefit of the people of Scotland and everyone who travels by rail – customers, staff and stakeholders, not shareholders.”

RMT are set to hold a ‘day of action’ on Friday to mark the nationalisation of ScotRail.

Its members will assemble to call for investment to ensure that ticket offices and protected and expanded, as well as rail services and jobs.

“As ScotRail enters public ownership, something RMT has long campaigned for, the Scottish Government now has the opportunity to break with the past and instead recognise the central role ScotRail has to play in meeting its climate change targets and invest in creating an affordable, accessible, reliable and improved rail network in Scotland,” he said.

“ScotRail workers were heroes throughout the Covid-19 pandemic yet as they transfer into the public sector, the Scottish Government has continually refused to protect the existing no compulsory redundancy agreement.

“To deliver the modal shifts necessary to tackle climate change and air pollution, the Scottish Government must commit to protecting and expanding all jobs and skills, ticket offices and ScotRail services.

“RMT will be taking these messages to passengers and the Scottish Government at our day of action this Friday.”