The Met Office has placed a yellow warning for snow and ice on the majority of the country from 3pm on Wednesday. 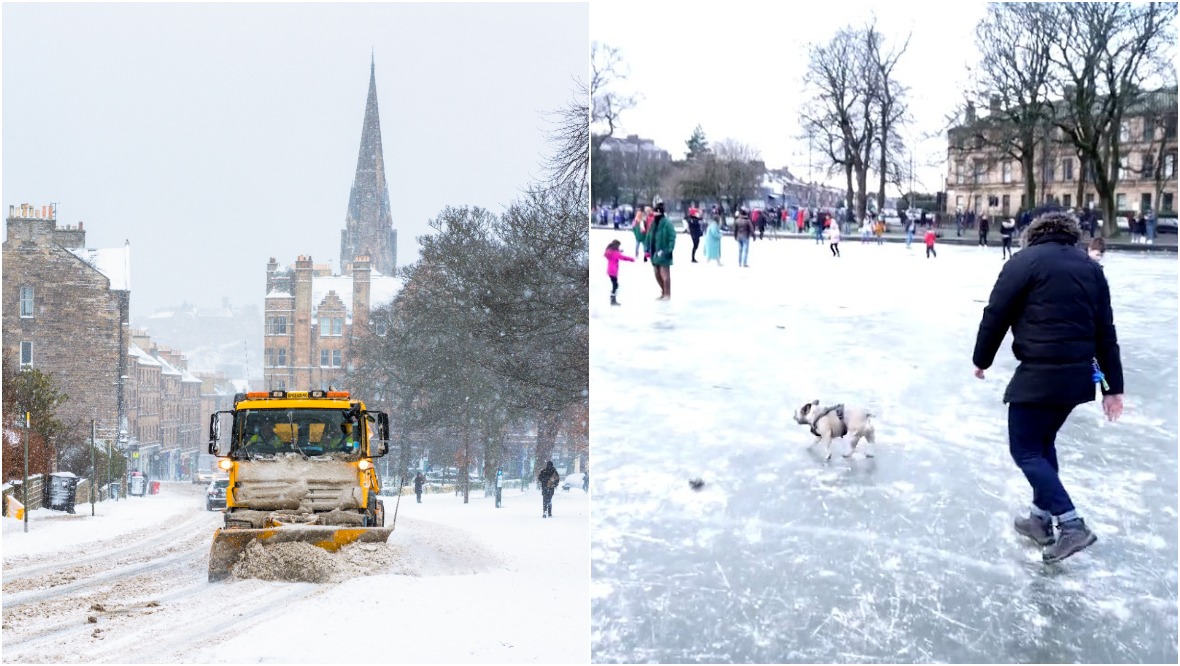 More snow is expected to batter Scotland on Wednesday evening as the country’s cold snap continues.

The Met Office has issued a yellow weather warning for snow and ice for majority of the country from 3pm on Wednesday until 11.59pm on Thursday.

Experts predict travel disruption on Thursday morning with rail services and roads at risk of being affected.

A band of sleet and snow will hit the northwest on Wednesday afternoon and move southeastwards across most parts of Scotland overnight, clearing southwards on Thursday morning.

A band of sleet & snow 🌨 will arrive across NW Scotland today & move southeastwards across most parts of Scotland overnight, clearing south Thursday morning ❄

Further snow showers will then hit northern Scotland on Thursday, especially during the afternoon and evening.

STV’s meteorologist Sean Batty said: “Scotland has been in the grips of cold Arctic air for a few weeks now, but Wednesday morning was the iciest dip with temperatures starting off at -12.3C at Loch Glascarnoch in the north Highlands.

“Temperatures were exceptionally low further south too with -7C recorded at Glasgow Airport and a surprisingly low -6.1C in Machrihanish. I say surprising because Machrihanish is very close to the sea, which would normally hold temperatures a little higher, but in this location when the wind is from the east and over the land, rather than the sea, it can get very cold.

“Wednesday night won’t be as cold with more cloud cover and band of rain and snow moving south.

“Around the islands and coastal areas this will likely be a mix of rain and sleet, but many parts of the Scottish mainland away from the coast will get a spell of sleet and snow for a time.

‘Later in the night and tomorrow morning the focus turns to central and southern Scotland where around 2-5cm may settle in the usual prone higher areas.’

“Across the central and eastern Highlands, as well as inlands parts of Moray, Aberdeenshire, Stirlingshire and Perthshire will see snowfall late evening and into early hours – mainly settling above 200m, where there could be several centimetres of fresh snow for the likes of Tomatin, Aviemore, Dalwhinnie & Braemar.

“Later in the night and tomorrow morning the focus turns to central and southern Scotland where around 2-5cm may settle in the usual prone higher areas – such as East Kilbride, Eaglesham, Whitburn, Penicuik and West Linton.

“At lower levels we will tend to see a more sleety mix, although a centimetre here and there cannot be ruled out too. The wintry mix will ease south of the border later in the morning with sunshine returning for many.”

He added: “No matter whether you have rain or snow tonight, with temperatures not too far off freezing again it’ll be icy for many areas. Even through Thursday temperatures will only be a few degrees above freezing so ice and snow cover will hang on.

‘There’s a lot of speculation about another ‘Beast from the East’ arriving, but at this time I will add caution to this.’

“It’s set to stay cold on Friday, although a sunnier day, before milder wetter and windier conditions arrive on Saturday. Highs will be between 7-9C by early next week for much of the country with a proper thaw setting in at higher levels too.”

Amid rumours of another ‘Beast from the East’ hitting the country, Sean urged people not to speculate too early.

He said: “There’s a lot of speculation about another ‘Beast from the East’ arriving, but at this time I will add caution to this. Yes, we’ve seen warming high in the atmosphere above the Arctic in the last week, and that is likely to bring a period of extremely cold and wintry weather, but no-one knows where this will land as yet – Canada, Scandinavia and the UK, or Russia.

“As always I will be keeping a very close eye on developments for the end of January and keep you updated.”