School children being charged with leading the way in tackling racism

The Scottish Government has teamed up with Show Racism the Red Card for the 'Captains' project. 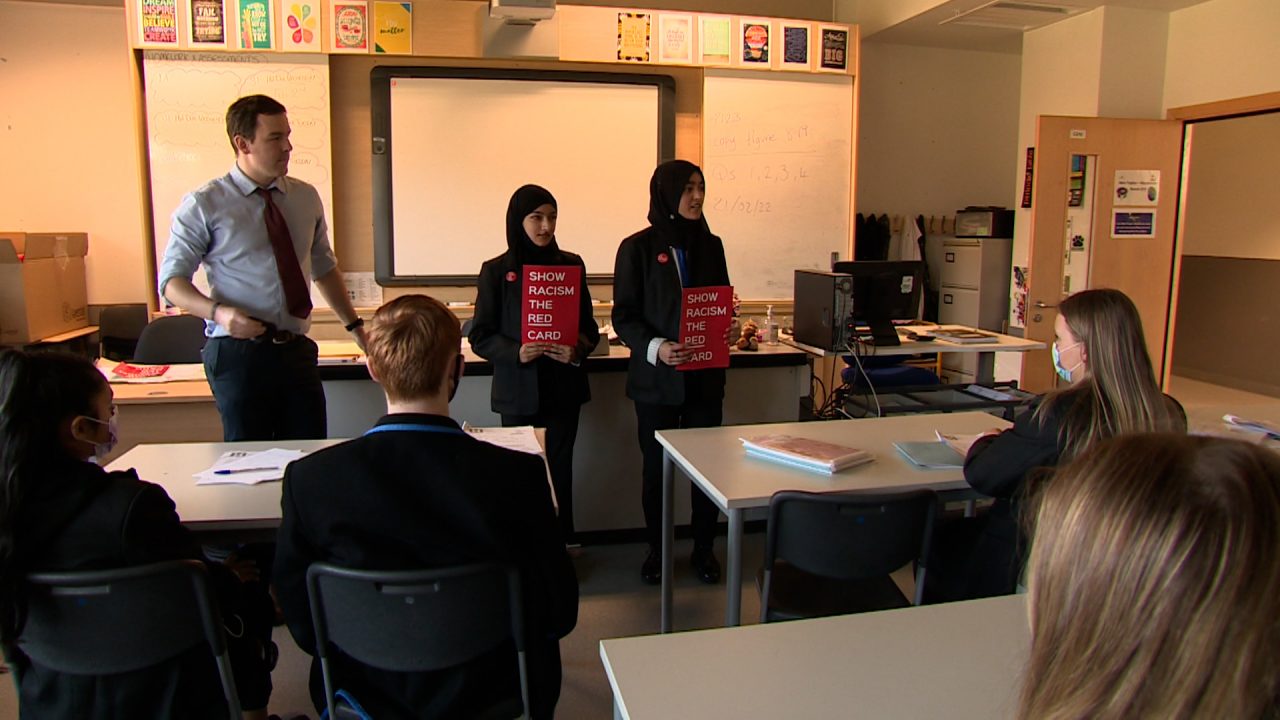 Scots school children will Show Racism the Red Card as part of a new government initiative against bigotry and discrimination.

The Scottish Government has teamed up with the UK’s leading anti-racism educational charity to fund their “Captains” project that sees children and young adults given the opportunity to shape the future of education in the country.

More than 50 captains were accepted to the programme, from four different age brackets and different ethnic minorities.

The young people selected will use their voices and experiences of racism to help shape future changes around the curriculum and adapt education for a modern Scotland.

During the process they will be given the opportunity to cast an eye over documents before they become policy.

A recent survey from Show Racism the Red Card Scotland found that 65% of school staff said they were aware of pupils at their school expressing misconceptions, stereotypes, or negative attitudes relating to racism.

Of the 743 staff members surveyed just over 25% reported that they had received any training on how to integrate anti-racism in their school.

Education secretary Shirley-Anne Somerville said: “We are already looking to make the teaching workforce, we’re looking to see what needs to change in the curriculum to make sure the curriculum is relevant for everyone within our schools.

“But importantly, when we are making policies, absolutely need to have young people front and centre of everything that we’re doing.

“They’re such an important voice. Perhaps too often in the past young people haven’t had the places in the policy making that they deserve.

Aliya told how she feels Muslims like her are unfairly targeted when there is a terrorist attack: “It makes me feel uneasy, I don’t think I should be blamed for something that I’ve not done.”

Both captains are passionate about tackling subtle racism in curriculum and misconceptions around Islam in schools and wider society.

“Everybody should feel safe in their own skin and not feel like they have to be a shade lighter or a shade darker.”

Amina has already enacted change in what is taught at her school as she requested teachers change a number of things in the textbooks, which she highlighted as offensive: “From my experience, some of the materials have been straight-up racist and that’s really unacceptable. So introducing a system that filters out any racist language and undertones and alienation that the muslim students feel after reading that in the curriculum.”

Captains will be from age groups at primary school, secondary school, school leavers and those in higher and further education to help highlight widespread issues with racism at all levels of learning in Scotland.

Chris Priestley, senior education worker at Show Racism the Red Card, said: “Young people have a profound sense of justice they are really alert that in terms of race equality there is a lot to be done. It’s about saying do we support you to have a voice, to platform that voice in a way that has an impact. To let them provide feedback, scrutiny and insight as we try to reform education.”

The £43,000 spread across the 19 local councils isn’t a ground-breaking amount for the charity.

Mr Priestley said it was adequate in helping them platform young peoples’ voices: “As a charity we are reliant on funding to do that, and I think that the Scottish Government is putting money in different areas which is why the sum for a specific role may seem small.

“I would prefer greater funding as it would expand our reach but I am realistic that this is potentially where the level of interest is in the anti-racist agenda at the minute. We hope to prove to everyone that is worthy of more interest and investment in the future.

Between Monday August 16 and Thursday February 17 SRtRCS provided educational workshops to 6024 participants across Scotland, including 966 adults and 5058 young people.