Temperatures accelerate past 30C as parts of Scotland break records

Temperature highs have been broken in some areas of the country while travel was disrupted on a record-setting Monday. 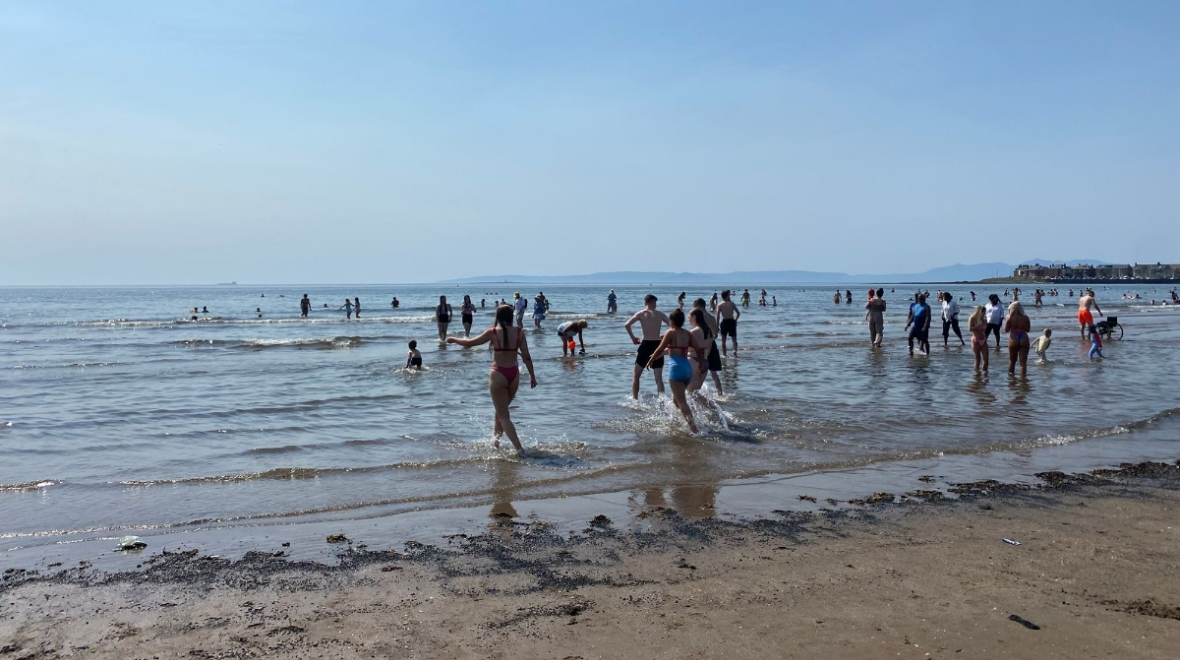 Temperature records in parts of Scotland have been broken on a day of searing sunshine across the country.

The Met Office station in Aboyne, Aberdeenshire, peaked at a high of 31.3C – over 1C above the former 30.1C record.

Experts have warned that Scotland’s highest recorded temperature of 32.9C could be broken this week, with Tuesday set to be even warmer during a “dangerous” heatwave.

Meanwhile, Leuchars hit its record temperature at 31.3C – the highest recorded there since 1990.

An amber weather warning for extreme heat has been put in place for the south and east of the country.

In Glasgow, ScotRail warned rail passengers they may face delays as overhead lines were tripping and resetting due to the heat between Queen Street Low Level and Hyndland.

Network Rail Scotland tweeted that it was investigating an electrical fault “caused by the extreme heat” and said the supply would remain switched off until the repairs are carried out.

Speed restrictions were also put in place on several major rail routes, including one between Scotland’s two largest cities, amid fears the track could buckle in the intense heat.

However, massive queues were spotted at Central station as many flocked to Troon beach to cool off in the heat.

Millions opted instead to work from home as congestion levels in Glasgow fell by around 5% on regular Monday levels.

In the Cairngorms, temperatures at 800m hit 23C, with “tropical” conditions above 20C expected overnight.

Forecasters said there was “a good chance” the Scottish record, set at Greycrook in the Scottish Borders in August 2003, could be broken in Tuesday – with up to 35C possible across south east Scotland.

The heat has prompted a warning over water usage, particularly in gardens, in an effort to keep supplies at an optimum level and avoid droughts later in the year.

Kes Juskowiak, water operations manager at Scottish Water, said: “The main challenge we have is if the demand keeps as high as it is, we struggle to keep up, which means we may see short-term interruptions for customers, low pressure, discoloration.

“We’re asking people to be sensible and efficient with their water use.”

Meanwhile, the Scottish Government insisted that emergency services “will be able to cope” with increased demand during the spike in temperatures.

Resilience minister Keith Brown told STV News: “Of course, we expect there to be possibilities for wildfires in this kind of weather. We’re also concerned about anybody getting into trouble by using bodies of water, which can be very, very cold – unexpectedly so on a hot day like today.

“The emergency services have stepped up but as of yet there have been no huge peaks on demand.”

Elsewhere in the UK, Wales has provisionally recorded its hottest day on record. The temperature in Gogerddan, near Aberystwyth, reached 35.3 degrees Celsius.

In England, an unprecedented red extreme heat warning has been issued, with forecasters predicting the maximum temperature could reach 41C on Tuesday.

STV meteorologist Sean Batty said: “Our top spot was Aboyne in Aberdeenshire and Leuchars in Fife, both reaching 31.3C. This makes it the hottest day on record in Aboyne and Leuchars, which is pretty significant for Leuchars as the record here was last set over 30 years ago, in 1990.

“While we’ve seen local records broken, there’s been no new national record for Scotland or England, but Wales set a new record this afternoon with a high of 37.1C.

“Tonight will be incredibly warm for many of us, especially in central and southern Scotland where temperatures could remain around 20C into the early hours, and if it remains above 20C this would make it a ‘tropical night’, which Scotland has only had one of, this back in 2019 at Achnagart.

“So if we do get a tropical night, something which is becoming more common in England, this may signal the start of a trend for us as the climate continues to warm.”