Strike action on Scotland's rail network and among waste workers is set to hit the country. 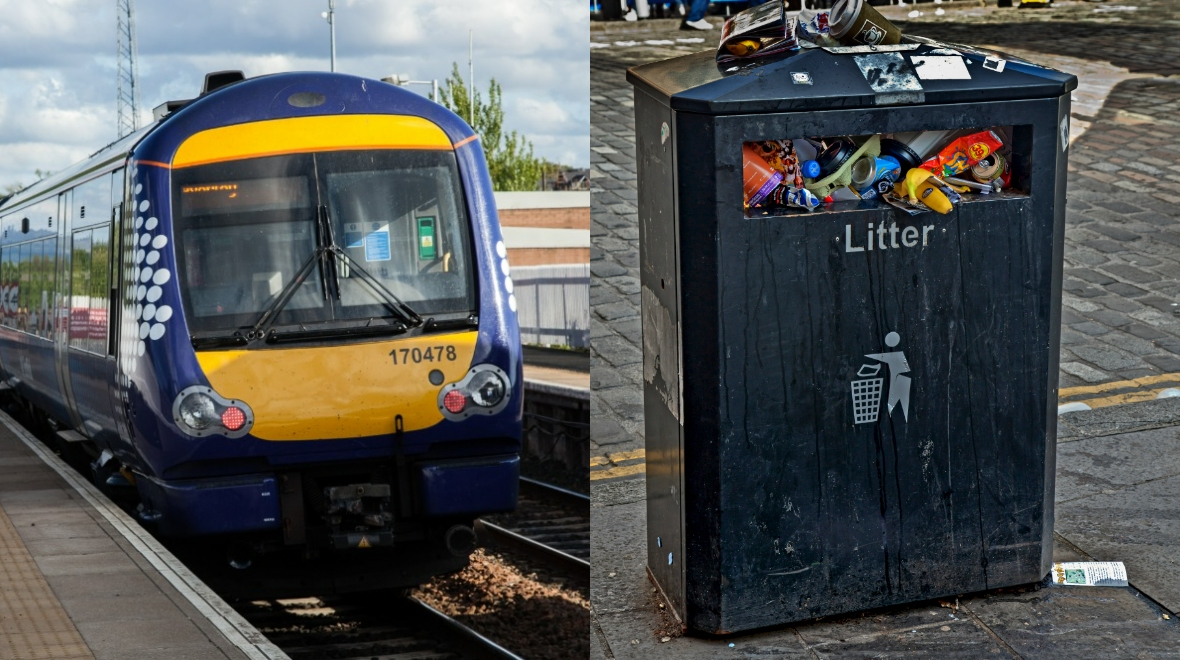 Scotland’s summer of discontent is set to continue as parts of the rail network grind to a halt and bins go uncollected in the latest wave of strike action across the country.

Workers from the Rail, Maritime and Transport (RMT) union at Network Rail start two days of industrial action on Thursday, reducing the number of services operating on major routes.

A second strike is scheduled for Saturday, while ScotRail has warned passengers not to travel unless absolutely necessary on either occasion.

Friday and Sunday, the days either side of the strike action, are also set to be hit by disruption, with signal box activation affected.

Meanwhile, waste workers at City of Edinburgh council will strike for the first day of 12 industrial walkouts over a “paltry” local government pay offer.

Staff in the capital warned “waste will pile up at the Edinburgh Festival” after COSLA failed to table a satisfactory pay offer to those represented by the GMB, UNISON and Unite organisations.

Colleagues in more than 20 other local authorities will join from August 26, while other council departments are also considering further measures.

The strikes could create a perfect storm for the capital’s festival season with transport links cut off in some areas and streets left unkempt as thousands pour into the city to soak up the atmosphere.

GMB Scotland organiser Kirsten Muat warned: “Waste will pile up for the remainder of the Festival and when people ask why we will tell them GMB members are not prepared to accept working poverty in our local services as an inevitability even if our political leaders are.

“These strikes are a direct response to the failures of COSLA and the Scottish Government over the last six months to recognise the impact of this cost-of-living crisis on our members and to bring forward a pay offer worthy of their consultation.

“The 3.5% tabled last week – a miserly lift on the previously rejected 2% – is a pathetic response while our members struggle against double-digit inflation and energy bills rising to over £4,000 this winter.”

ScotRail workers are not involved in the rail walkout, however signal operators will be among those taking action, meaning only a limited number of services are able to run.

It is the latest in a wave of strikes to hit the rail network this summer following previous action which ground routes to a halt.

Liam Sumpter, route director of Network Rail Scotland, said: “This week’s strikes will once again cause significant disruption and we’re doing everything we can to minimise the impact on passengers, businesses and the wider community.

“Please check your journey in advance as those services that are operating will finish much earlier in the evening.”

Previous industrial action saw fewer than 200 trains able to run, however that number will rise to 378 for Thursday and Saturday’s strikes as further routes open to Fife and the East coast.

But major transport hubs including Edinburgh Waverley and Glasgow Central will close before 7pm, with the final services leaving at around 6.30pm, Network Rail warned.

“Network Rail have not made any improvement on their previous pay offer and the train operating companies have not offered us anything new,” he said.

“Tube bosses are having secret negotiations with the Government about cutting costs by slashing jobs and undermining working conditions and pensions.

“Network Rail is also threatening to impose compulsory redundancies and unsafe 50% cuts to maintenance work if we did not withdraw strike action.

“The train operating companies have put driver-only operations on the table along with ransacking our members’ terms and conditions.”

No service on any unlisted routes.

The services will run between 7.30am and the final train will leave “well before” 6.30pm.