Andy Livingstone was helping people to evacuate hours after a suicide attack at Kabul airport. 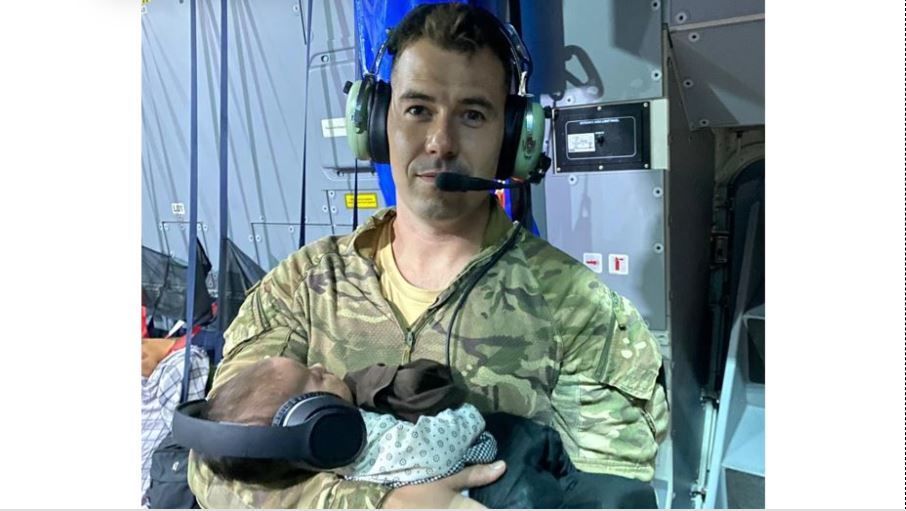 A Scots RAF sergeant has spoken of how he cradled a newborn baby accidentally dropped by an exhausted mother during an evacuation flight from Kabul.

Andy Livingstone, an RAF Loadmaster, was helping people to escape the city, just hours after a suicide attack at Kabul Airport.

The 31-year-old said one family caught his attention during the evacuation, with one girl in shock and needing medical attention.

Describing the experience, Sergeant Livingstone, explained that he pleaded with the family’s parents, to let him hold their two-week-old baby to let them get some rest, after the mother dropped the baby twice due to her sheer exhaustion.

“We had got out of Kabul maybe 10, 15 minutes, and the family, the whole family caught my attention,” he said.

“There was mum, dad, their three daughters and their son, and they all looked terrible.

“So it was the eldest daughter who initially caught my attention, she was clearly in shock, really exhausted, in a bad, bad way, so priority was getting her medical attention.

“(I) stayed close by throughout the flight to the family making sure they were alright and out the corner of my eye at one point we seen something drop to the floor, looked over and it was an awful thing to see, mum had dropped her two-week old little girl.

“We picked her up, popped her on mum’s knee, tried to strap her in as best I could with the seat belts and within three or four minutes it happened again.

“At this point the only thing I could think to do was plead with mum and dad to just let me have the baby for a couple of minutes, half an hour to an hour, whatever it took so they could get a bit of rest and carry on. It was a horrendous thing to see.”

Sergeant Livingstone, who is a father of two girls, aged three and five, said it was “really difficult” to see people at their lowest point.

He said: “It is really difficult to describe, seeing people with bandages on their heads, cuts up their arms, clear injuries.

“A lot of them had no shoes on. It was just… people at their lowest possible point.  They didn’t even have energy to get up the ramp (of the aircraft), it was a struggle.

“It was just really, really difficult to watch and see people. I’ve never seen anything like it and I hope to never see that again.”