Scotland and its people always held a special place in Her Majesty’s heart. 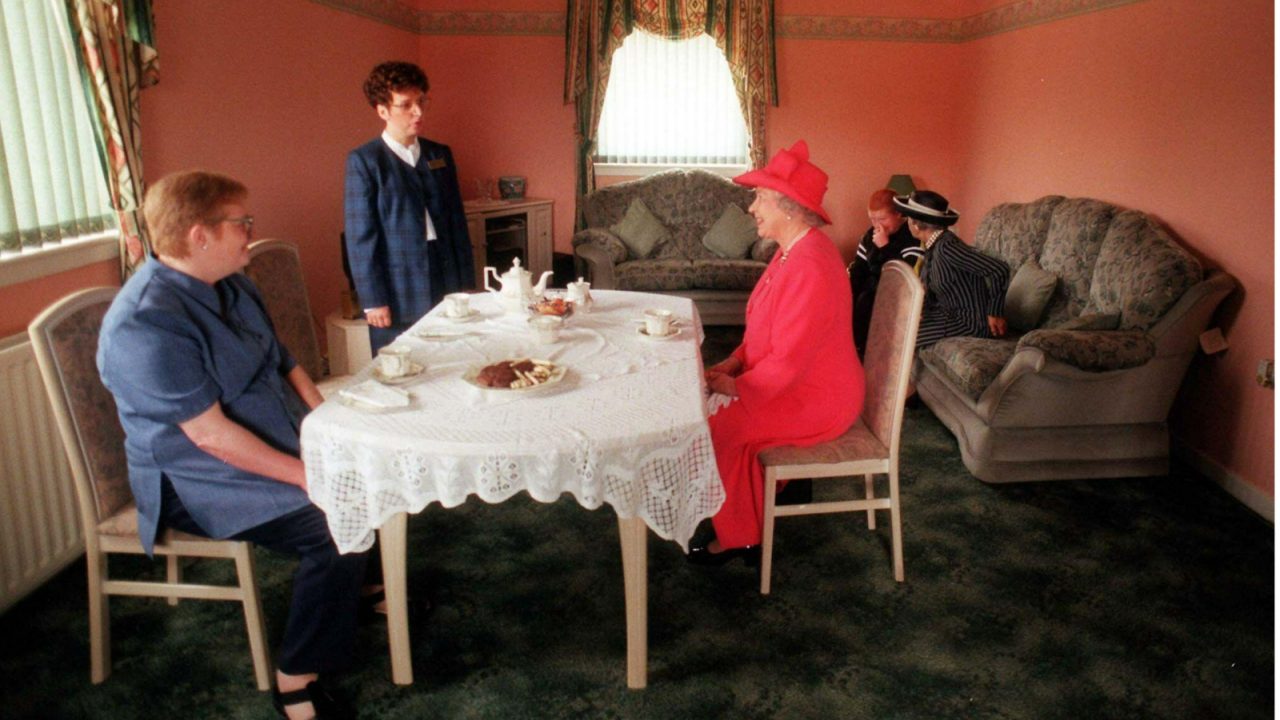 Back in the summer of 1999, Elizabeth the Second, by the Grace of God, of the United Kingdom of Great Britain and Northern Ireland and of Her other Realms and Territories Queen, Head of the Commonwealth, Defender of the Faith, settled down for a cup of tea in a council house in Glasgow.

She wore her pearls and a bright pink buttoned coat with matching hat. The room was painted peach, the carpet forest green, and her feet, tucked into patent black court shoes, rested beneath a table laid with chocolate biscuits and shortbread.

In the teapot was a Tetley’s teabag and in front of her were Susan McCarron and her ten-year-old son James. Later, some of the press would say the Queen looked uncomfortable. To Susan and James though, she was simply “very nice”.

“I found her very easy to talk to.”

It had been a visit among a long list of visits, this time to hear about housing associations and the work being done to provide homes for people in need. Some saw it as an attempt to modernise the royal family, to bring an ‘extraordinary’ figurehead into the ‘ordinary’ lives of her subjects.

To Susan and James though, she simply became a treasured memory, a long-told family story of the day the Queen came for tea.

In a way, this is perhaps one of the most important tributes Her Majesty Queen Elizabeth paid the people of Scotland – decades of personal moments that built her into the monarch the nation now values so much.

It was a mutual feeling. As much as Scots now carry the many memories of the times they saw her, be it elevenses on a council estate in Castlemilk, or planting cherry trees in Edinburgh, the Queen too has maintained a special relationship with the land of lochs and mountains and its people.

Here are just a few of the many moments remembered from the Queen’s time in Scotland.

Elizabeth was just a girl when she first ventured north, and her enthusiasm for this country was genuine. Her mother was Scottish and her sister, Margaret, was born here.

As a child, each August she was taken by train from London and would divide the next ten weeks between Balmoral and Glamis Castle.

Balmoral held a dear place in the Queen’s heart. It is there she spent part of her honeymoon – at Birkhall on the Balmoral Estate – where she took her children, her grandchildren and later her great grandchildren too.

“Balmoral is a place one looks forward to very much as the summer goes on,” reflected The Queen in the 1990s. “I think it has an atmosphere of its own. You just hibernate; but it’s rather nice to hibernate for a bit when one lives such a very movable life.”

Her granddaughter Princess Eugenie confirmed that “it’s the most beautiful place on earth. Granny is most happy there”.

Scotland is also where the Queen danced with the man she gave her heart to, Lieutenant Philip Mountbatten.

Elizabeth first set eyes on Philip at 13 years old, when it is said she vowed never to settle for another man. It was 1939 and she was a shy princess, while he was a handsome Greek prince and naval cadet.

When he eventually proposed – at Balmoral in 1946 – Elizabeth accepted without first consulting the King and Queen. They insisted on a period of reflection, but Elizabeth was resolute and letters written soon after her wedding to Philip in 1947 showed how determined she was.

“Philip is an angel,” she rapturously told her parents. “We behave as though we had belonged to each other for years.” In return, he enthused: “She is the only thing in the world which is absolutely real to me.”

After 73 years of marriage, they remained as committed as the day they met. Quaintly, they were said to still take afternoon tea together every day.

In her golden wedding speech in 1997, Elizabeth said: “He is someone who doesn’t take easily to compliments. But he has, quite simply, been my strength and stay all these years. “I and his whole family, in this and many other countries, owe him a debt greater than he would ever claim or we shall ever know.”

In her role as Queen, Elizabeth dutifully opened Scotland’s new bridges, its railways, its hospitals and groundbreaking industries.

In her earlier years on the throne, some of the events allowed the young queen a chance to show her more adventurous spirit – the spark which had seen her serve as a driver and mechanic during the Second World War.

Not afraid of a bit of dirt, here she is in July 1958, visiting her first coal mine at Rothes Colliery Fifeshire. She had no problem dressing for the occasion, wearing white overalls, scarf and helmet and black gumboots during her visit to speak to the miners.

She spent half an hour underground visiting the coal face. It was a difficult time for miners in Scotland.

That same year, the National Coal Board (NCB) announced it would close 36 pits. Twenty of the 36 were in Scotland, and they included two in West Lothian: Loganlea and Harwood, which together employed 500 men.

Perhaps the times the Queen smiled the most though, were when children came to see her. For almost every event she attended in Scotland, there was a child who had a posy in one hand and a parent gently nudging them from behind, reminding them to curtsy.

It seems a small thing, but there is no doubt a great many Scots down the decades have the same memory of a lady in a hat, a figure of great importance, smiling down at them and thanking them for their gift.

In times of sorrow

Not all of the Queen’s visits were in times of pleasantry, indeed some of her trips north were as the country faced its hardest moments.

She was there to lay flowers in the aftermath of the Dunblane massacre, one of the deadliest mass murders in the UK’s history.

The small Scottish town of Dunblane was racked with grief and horror after a killer shot dead 16 primary school children and their teacher.

The Queen sent her sympathies to the parents and personally travelled north to lay flowers in tribute to those who lost their lives.

For Queen and country

Elizabeth also had a special relationship with the British Forces, particularly with the Scottish regiments, the thousands of soldiers who swore to protect her life and the lives of her people.

She’s also fondly petted most if not all of the Royal Regiment of Scotland mascots, the sturdy little Shetland ponies who carry the name Cruachan.

The current mischievous pony, Cruachan IV, famously attempted to nip Her Majesty during the royal inspection at Balmoral Castle in 2014.

She apparently forgave him.

Photographs of Elizabeth in Scotland show a similar scene – a smiling Queen on holiday, dressed in her heavy tartan skirts, driving her Range Rover down muddy roads with her security team relegated to the backseat.

One of the most enjoyable shared stories of Elizabeth’s driving – and of her subtle humour – was in September 1998, when King Abdullah of Saudi Arabia was visiting the Queen at Balmoral. After lunch, the Queen had asked her royal guest whether he would like a tour of the estate.

An initially hesitant Abdullah allegedly agreed. The royal Land Rovers were drawn up in front of the castle. As instructed, the Crown Prince climbed into the front seat of the front Land Rover, with his interpreter in the seat behind.

To his surprise, the Queen climbed into the driving seat, turned the ignition and drove off. Women are not – yet – allowed to drive in Saudi Arabia, and Abdullah was not used to being driven by a woman, let alone a queen.

The Queen, an Army driver in wartime, accelerated the Land Rover along the narrow Scottish estate roads, talking all the time. Through his interpreter, an apparently nervous Crown Prince implored the Queen to slow down and concentrate on the road ahead.

The Queen, as the story goes, did not immediately oblige.

One’s Scottish is quite good

According to the Queen’s cousin, Margaret Rhodes, the Queen spent so much time at Balmoral that she perfected the Aberdeenshire accent.

As Ms Rhodes once told BBC Radio 4: “She’s a very, very good mimic. She can do the Norfolk and Scottish – Aberdeenshire – accents beautifully and often pretends to be a keeper or somebody or other of them.

“She’s full of laughter, got that wonderful smile. She can tell very funny stories of things that have happened to her where things might have gone just a fraction wrong.”

Queen of the games

Her Majesty also made an annual appearance at the Braemar Games on the first Saturday in September, first attending it when she was just seven-years-old in 1933.

Organisers always made sure her favourite items featured in her afternoon visit and pretty much every photograph taken over the years at the games shows her smiling broadly.

Throughout her reign, Queen Elizabeth ventured into every part of the Scottish mainland and knew the Highlands like the back of her hand.

It is perhaps her love of its landscape, and her own adventurous spirit which brought her more in touch with the people who call Scotland home than anything else.

It is a possibility that in her, the Scots saw and appreciated the values that she too held dear; loyalty, devotion to family, a steadfast heart and pride for the land. Stalwart and steady with an adventurous spirit is how she will be remembered by Scotland.

The lady with the many hats, who laughed at caber tossing, drove like a demon, and appreciated the sound of bagpipes, flowers from children, and the inescapable beauty of the Highlands.

As Her Majesty was often quoted as saying: “You can go out for miles and never see anybody. There are endless possibilities.