Police body-worn cameras could ‘lead to spike in guilty pleas’

Police Scotland are asking the public for their view on body-worn cameras being introduced nationally. 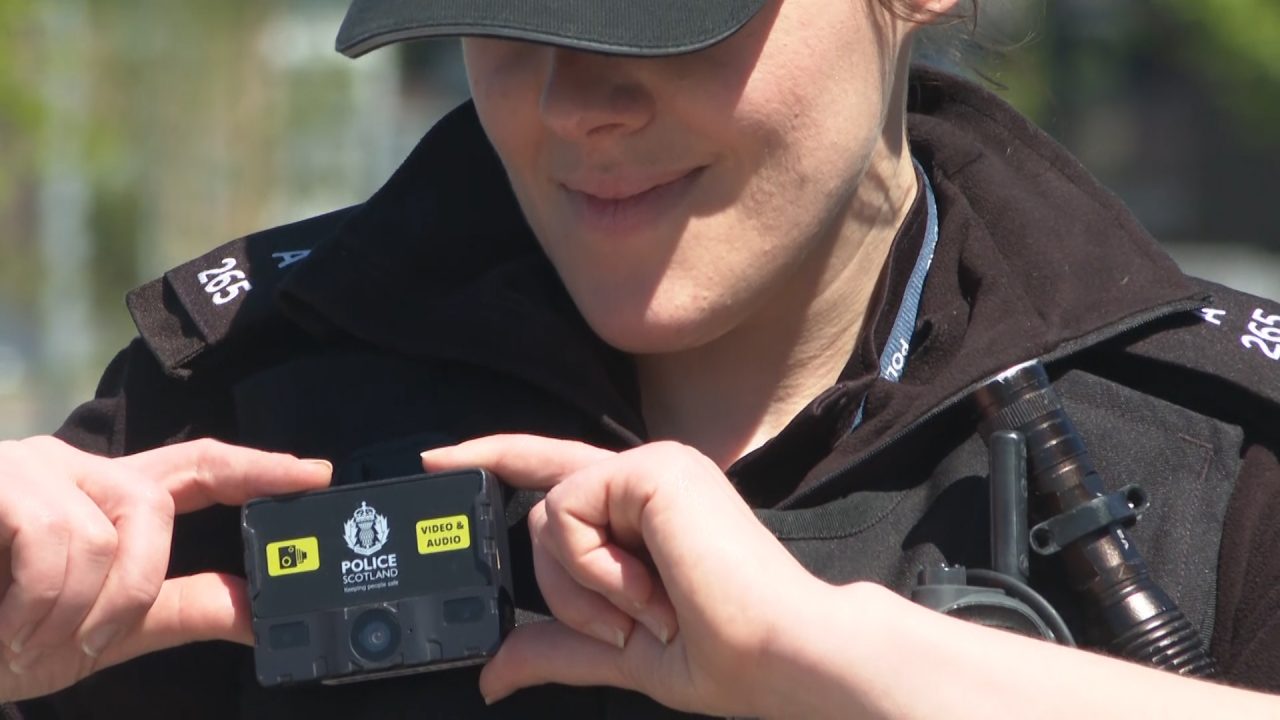 The use of police staff body-worn cameras could lead to a “spike in guilty pleas” and reduce pressure on Scotland’s backlogged criminal courts, a senior police officer has suggested.

Chief Superintendent Matt Richards has backed more than 10,000 police officers and staff across the country using the technology to increase safety and accountability, improve the quality of evidence from incidents and the speed of justice for victims, and boost public confidence in the police.

According to the Police Federation of England and Wales, since 2016 all forces in those two countries have introduced the technology, which films fast-moving emergency incidents in high-quality footage from the officer’s perspective.

It is also supported by the police watchdog in England and Wales.

But “financial and structural constraints” mean Scotland is lagging behind.

Only officers in the north east of Scotland (Grampian) have access to the torso-mounted recorders after they were tested there in 2013 and kept in use ever since.

Constable Caileag Walker, of the alcohol and violence reduction unit in Aberdeen, told STV News the bodycams give her reassurance when she’s dealing with difficult situations.

She said: “It just gives me that little bit back up but it also gives the public the reassurance that anything I’m doing, I’m happy to be on film and I’m happy for anyone to review at a later date.

“I’ve had it where I’ve dealt with incidents where people have assaulted me and it’s been captured on camera – I’ve captured assaults on others, I’ve captured general disturbances, it’s just been invaluable when it comes to policing.

“Usually, if people aren’t happy about being filmed it’s because they’re doing something they shouldn’t. Generally, the public are more than happy for me to be going about with an activated camera on.”

Police Scotland are asking the public for their view on the cameras being introduced nationally, after a public survey in February showed strong support for armed police having the kit.

Firearms officers patrolling the United Nations COP26 climate conference in Glasgow in November will have body-worn cameras. All other UK armed officers already have them.

Mr Richards told the PA news agency the cameras would increase safety, as new figures showed assaults on police staff increased overall by 6.3% in 2020-21 compared with the previous year, with 6942 attacks recorded.

He compared body-worn videos with road-side breathalyser tests, saying those tests led to more people admitting their guilt “because of the science, the irrefutable technology element”.

He told PA: “British policing is about policing by consent and ensuring the public understands what we’re doing, and gives us the authority to continue policing in that way.

“Whatever the public tells us, we will bear in mind in terms of how we run the programme.”

He also said victims of crime could benefit from “increased speed and efficiency” in the under-pressure criminal justice system, with a backlog in High Court trials not expected to be cleared until 2025.

Mr Richards added: “We know there is a real spike in guilty pleas, which again reduces that congestion in courts.

“On top of that, complaints against the police drop off, which not only increases public confidence but also officer morale, and leads to greater efficiency, as every complaint by the public has to be investigated.”

Asked about privacy and data protection concerns surrounding the disclosure of the footage, Mr Richards said: “You can’t just request footage and put it into the public domain.

“Not only is it overt, so everyone knows they are being recorded, but also they have to trust us to manage it properly.

“We will adhere to all of the necessary guidelines and data protection legislation.”

He went on: “The increase in guilty pleas is a clear reflection of the fact that where there is video footage … it really drives home the context of the operating environment and the conduct of those individuals involved.

“Officers will tell people they are videoing when they turn it on.

“That in itself is often a preventative measure, as soon as they know that, there is a proliferation of evidence that people stop doing what they’re doing.”

The public consultation launched on Tuesday and runs for three months.

The Scottish Parliament’s Justice Sub-committee on policing in March noted that “financial and structural constraints” were preventing the rollout of cameras to all frontline staff in Scotland.

Asked why Scotland was behind the rest of the UK, Mr Richards said it was “purely financial pressures”.

He said: “It comes from the Government via the Scottish Police Authority, we have funding in place now for the armed policing officers, and we’re now obviously negotiating for the rest of the police officers and staff.

“We’re looking at between 10,000 and 11,000 frontline officers and staff. It isn’t just the bobbies on the beat it’s also the front-counter assistants, custody staff, people doing the other really important jobs.”

Research across police forces in the UK and US in 2014-15, led by the University of Cambridge, found a 93% reduction in complaints against police due to the introduction of wearable cameras.

Researchers suggested the awareness that encounters were being recorded helped modify people’s behaviour and increase compliance with police.

“There can be no doubt that body-worn cameras increase the transparency of frontline policing. Anything that has been recorded can be subsequently reviewed, scrutinised and submitted as evidence”, said lead author Dr Barak Ariel.