Jennie Robertson, who suffers from arthritis, will eat less and stay in bed to save on energy costs. 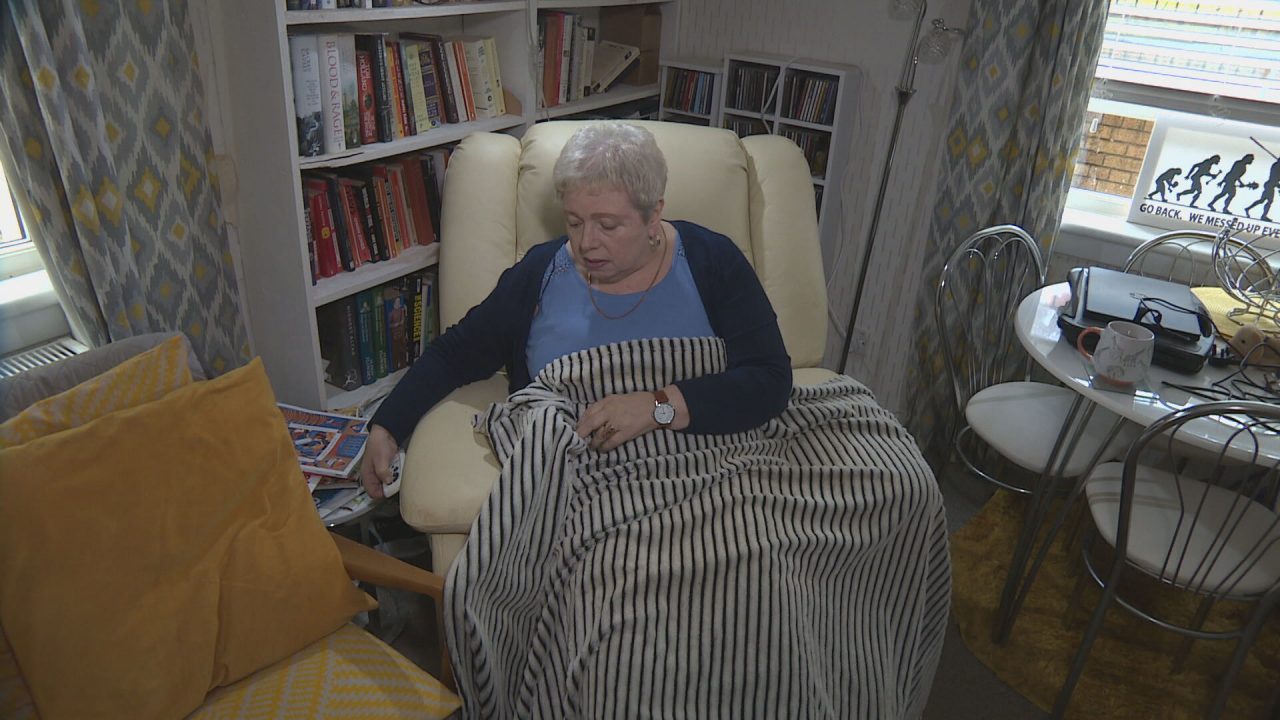 A pensioner has said she will eat less and stay in bed longer to save on rocketing energy costs this winter.

Jennie Robertson, 68, lives in Arden, Glasgow. She has arthritis, but no longer lets her heating rise above 19C and wears a blanket in the living room.

She currently pays £85 a month for gas and electricity, but is afraid her limited income won’t be able to cover her rising bills.

Millions of people across the UK are facing massive rises in their energy cost – with regulator Ofgem setting a £3,549 price cap on Friday.

“I’m petrified, I suffer a lot of pain if I get too cold,” Jennie said. “I’m frightened to put on the heating at all this winter.”

Jennie currently receives a retirement pension, pension credit and disability benefits and while she is “very good” at managing money, she fears she will struggle for the foreseeable future.

“I’ll need to have a cold house,” she said. “I’ll probably have to eat less and have more soups and sandwiches. Stay longer in my bed.”

Jennie previously worked in housing in deprived areas of the city during the 1980s.

“Poverty was very concentrated to certain areas then,” she said. “It’s worse now – it’s going right up the income bracket.

“Even people with higher incomes will find it really hard. That just shows what it will be like for the people at the bottom.

“We need targeted support for the people who need it.”

Disabled gran ‘will go without’ for teenage son

A disabled gran said she will be forced “to go without” to keep her teenage son clothed and fed this winter.

Lisa McDonald, 38, lives with her son aged 16 and has an older son aged 21. She looks after her baby granddaughter Daria once a fortnight.

She said it has been “difficult” to pay bills and is dreading the colder months ahead.

“I find myself chasing my tail just now because I’m on a pre-paid meter and I’ve not topped up gas all summer,” said Lisa. “I don’t know how I’ll manage.

“I will go without as long as my son is alright and as long as there’s gas and electricity in the meter. To think about it terrifies me.”

Lisa is unable to work due to her disability and relies on benefits, but said one-off payments will not help the most vulnerable in the long term.

She added: “Somebody needs to step up and help us. I don’t know how else to bring money in.”

Samantha Bruce founded the Lochee Community Larder three years ago and said the number of people using the service has “doubled” over the last five months.

It sells bags of food items and cupboard essentials priced between £2 and £6 to feed families of four.

Samantha said: “People are so scared. They are terrified about not being able to feed their families. They can’t afford bills, energy, their basic living needs. They can’t do it.”

The mum-of-four now has to rely on the service herself to put food on the table for her family.

She said: “My husband has a well-paying job. With gas and electricity and rising fuel costs, we have found ourselves with no money to spare by the end of the week. The kids have got to be fed somehow.

“It’s so soul destroying to find yourself in a position where you can’t provide for your family. You don’t know what the future is going to bring.”