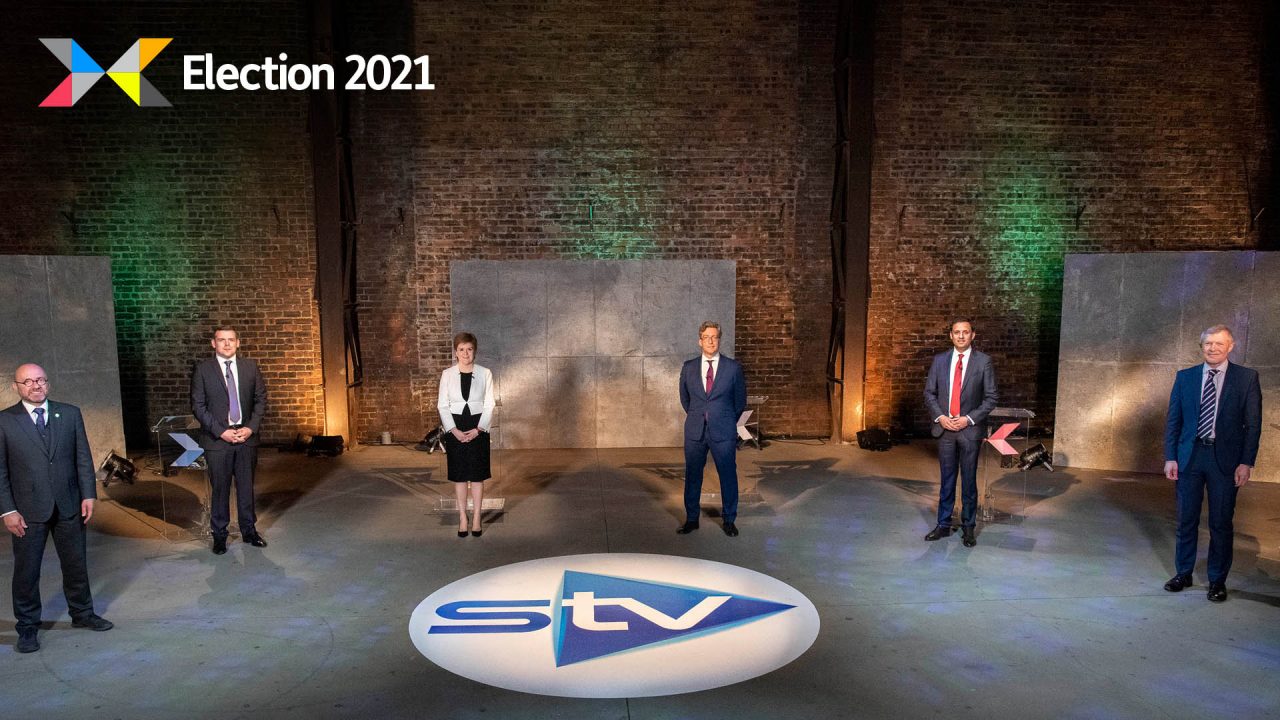 They put forward their visions for recovering from the coronavirus pandemic, as well as their stance on the economy, the NHS, education, climate change and the prospects of a second independence referendum.

Here are some of the key exchanges from Tuesday evening’s debate across a range of issues:

Sarwar said Scotland’s recovery from the coronavirus pandemic doesn’t start or end with the lifting of lockdown or with the virus going away. He said: “It is going to take years for us to get back to pre-Covid levels – never mind better than it was pre-Covid.

He added that what people across the country are most worried about is keeping loved ones safe, getting access to the vaccine, their childrens’ mental health, jobs and cancelled operations – and not the date of a referendum.

Harvie said the country is going to face huge economic challenges and that’s why Scotland needs the economic powers to face those challenges – challenging the notion that even debating independence has to be “some sort of terribly hostile process”.

Sturgeon said it was really important that people judge us on “what we do about Covid and not what we say”.

She said: “When the Covid pandemic struck just over a year ago, the first thing I did was put all planning for an independence referendum on pause, so that as First Minister I could focus 100% on steering the country through the crisis, and that’s what I will continue to focus on for as long as necessary.”

She also accused the Conservatives of being reckless through the pandemic with their approach to Brexit by “tearing Scotland out of a transition period against our will”.

Ross said Scots were facing the choice of two futures – either by coming together and getting the focus 100% on recovering from Covid, or the SNP getting a majority and “demand another divisive independence referendum and put Scotland’s recovery at risk”.

He said: “We can recover from Covid using the strong foundations of the United Kingdom, we can tackle the looming economic crisis.

“But we won’t manage any of that if the SNP get a majority and hold another divisive referendum.”

Rennie also disagreed that there should be another referendum in the next five years.

But Sturgeon said Scotland’s future was at stake, saying this election will ultimately determine who decides that future – those who live in Scotland or Westminster politicians.

She said: “By giving both votes to the SNP you will secure leadership through Covid, a plan for recovery and when the crisis is over the choice of a better future with independence.”

Rennie claimed Brexit was an example as to why breaking from the UK was not a good idea.

He added: “These were dangerous issues, they needed to be handled with care.

“That’s why we want to make sure we don’t repeat the mistakes with independence.”

The Scottish Lib Dem leader said the focus should be on convincing people of the merits of being in the EU.

Nicola Sturgeon said the SNP “took its eye off the ball” over drugs deaths, adding that she had set a £250m investment programme to build up rehabilitation services.

Ross said drug deaths in Scotland had doubled during her time as First Minister.

Sarwar questioned Sturgeon over problems at the Queen Elizabeth University Hospital in Glasgow – which was commissioned when the SNP leader was still health secretary.

The Labour leader said the flagship building had been allowed to open despite a report saying “the water supply was not safe and at high risk of infection”.

He said this resulted in 40 infections in child cancer patients, and two deaths.

Sturgeon insisted: “It is not the case that reports that I personally saw that said the hospital was unsafe were ignored. That is simply not the case.”

She said “we don’t know all of the answers”, saying a public inquiry has been set up to provide “full scrutiny”.

Sarwar said: “If that was me, I would want to hunt down the answers.”

Sarwar has said there is a “generational shift” when it comes to transitioning away from fossil fuels as he was asked whether his party was “too close” to the industry.

He added: “Is your party just too close to the fossil fuel industry to be taken seriously?”

Sarwar said: “We have got to make sure it’s a truly just transition that doesn’t decimate jobs.”

Harvie said the Scottish Greens have the solutions to the climate crisis and the vision for a fairer, greener, independent Scotland in Europe.

Harvie said the Scottish Qualifications Authority “punished” 75,000 mostly working-class young people, lowering their school grades for no reason other than their postcode.

He questioned Sturgeon about the situation facing school pupils this year.

He said: “This year, exams have been cancelled again and you said there is no requirement for pupils to sit an exam or prelim this year, but the SQA’s (Scottish Qualification Authority) own explanation to students says ‘the look and feel of these assessments may seem like an exam’; it really does and for young people who have just got back into the classroom it really does feel like an exam.”

He asked the SNP leader if she was letting the SQA preside over “another exams fiasco”.

Sturgeon replied by saying an alternative way of certifying young people’s achievements needed to be found because exams can’t take place again this year due to Covid.

She said: “We’ve put teacher judgment at the heart of that; the SQA have rightly issued guidance, there are lots and lots of different subjects and how that will be done in one subject is different to how it will be done in some other subjects.”

Rennie said it was important to persuade whoever is Prime Minister of the United Kingdom to implement a universal basic income – giving the Scottish Parliament powers over taxation and social security.

He said: “Whoever is there over time, we persuade them of the merits of that because I think there was an ideal opportunity at the start of the pandemic to do exactly this, which is why we made the positive case for that happening because we think a universal basic income would be a good thing for the country.”

The Lib Dem leader said his party is running a positive campaign on jobs and climate.

Meanwhile, Sturgeon pressed the Scottish Tory leader on the impact of Brexit on Scotland’s fishing industry.

Ross accepted: “We haven’t done enough for the fishing industry, we need to do far more.”

He said he would “stand up for Scottish fishermen” but the SNP leader asked him: “Isn’t it the case that whatever the UK Government says, you just do it?

“First ministers need to stand up for Scotland, Douglas, not take orders from Westminster.”

Ross responded by saying: “First ministers need to work with governments around the United Kingdom.

“We will deliver most for the people of Scotland for our recovery, if our two governments work together, not always looking to pick fights.”

How is STV covering the election?

Voters in Scotland will go to the polls to decide the make-up of the next Scottish Parliament on Thursday, May 6.

There will be no overnight count at this election due to the coronavirus pandemic, with a result instead expected over the weekend of May 7-9.

Here is how STV News is covering the 2021 election:

Colin Mackay has been carrying out one-to-one leaders’ interviews, which are also available for catch-up on the STV Player.

This show will air between 4-7pm and 8pm-8.30pm on Friday, May 7, bringing viewers the first results as they come in.

The programme will be presented by John MacKay outside Holyrood, with STV special correspondent Bernard Ponsonby and Rona Dougall analysing the numbers at STV’s results studio in Glasgow – bringing viewers the story as it unfolds and key declarations as they happen live on air.

STV reporters will be at voting counts across the country, feeding in live to the programme.

An additional special will air on Saturday, May 8 from 4.30-6.30pm, covering the results being declared as the new parliament begins to take shape.

Coverage continues on STV’s nightly news programme, with Kathryn Samson travelling to communities across the country in her Covid-secure ‘bubble’, inviting viewers to share views on all the political developments of the day.

The STV News website will offer comprehensive, up-to-the-minute coverage including leader interviews, expert insights from STV’s political team, rolling results coverage as the counts declare and detailed analysis once the outcome is known.

Reporting will be available on the STV News website, apps and social media platforms.