No sir, we can’t boogie: Wedding planners protest outside parliament

Organisers have hit out at coronavirus restrictions which mean guests at wedding parties and receptions must remain at their tables. 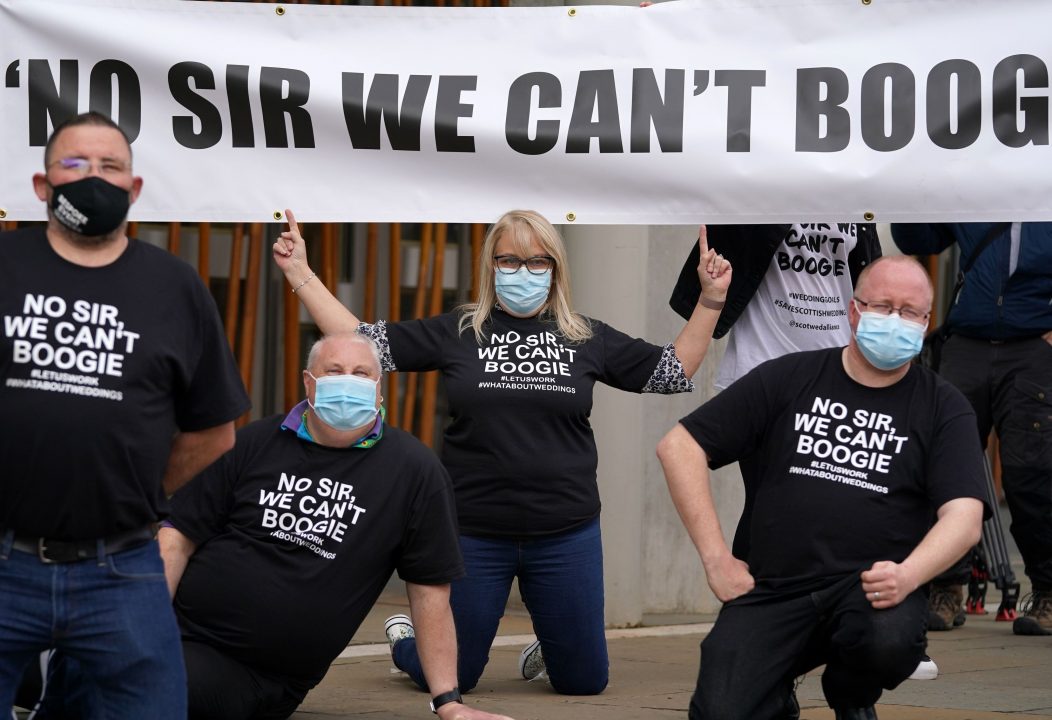 Wedding industry workers have staged a protest against the current coronavirus restrictions with uncertainty lingering on ceremonies taking place amid changes of the levels.

Pauline Borris, of LBS Event Design & Wedding Planners, organised the protest on Monday outside the Scottish Parliament building in Edinburgh citing a lack of clarity in the rules.

A few dozen people attended wearing T-shirts and holding banners saying “No sir, we can’t boogie” in a swipe at the Euro 2020 fan zone being held in Glasgow Green for thousands of attendees.

Pauline revealed some couples are putting off their nuptials by two years to 2023 due to the guidance which currently only allows up to 200 people to attend.

No more than 200 people should attend a wedding in level zero, according to the Scottish Government, with the figure at 100 for level one, 50 for levels two and three, and 20 for those in level four.

Most of Scotland’s islands are in level zero, with much of central Scotland in level two and other areas in level one.

Pauline said: “We got on really well today, we hope we’ve got the message across, we just need to wait and see what Nicola announces tomorrow.

“The main aim is for us to be treated equally with the rest of the events industry and for clarity when you can have the fan zone happen in Glasgow Green for 6000 people non-tested – but you can’t have weddings.

“Couples are now moving their weddings to 2022-2023 and we just don’t know where we stand with bookings because we don’t know what’s going to happen – couples don’t want to get married when they can’t dance or can’t move from their tables.”

The current guidance states weddings “should only take place in a safe environment” and “face-to-face interaction within two metres should be avoided as far as possible”.

It also recognises a marriage ceremony as a public event meaning that even in levels zero, one and two there should be physical distancing – despite being able to hug friends and family in a social gathering at a private home.

Pauline has also had political backing on the calls for clarity with Labour MSP, Paul Sweeney, among those demanding answers in the Scottish Parliament.

She said: “We’ve got constant contact with politicians, my local MSP Paul Sweeney brought it up in Parliament last week about the inconsistency with events… John Swinney’s response was basically, ‘we need to go down the levels’.

“Even when we go down the levels in level zero we still don’t have any answers because you still can’t dance.

“Some places in Scotland just now are in level zero and the only difference to level three is basically you can have 100 at your wedding or 200, but still have the same restrictions are in place.

“Lives matter at the end of the day, that’s the most important thing, but most people that attend a wedding are older people who are probably in the vaccine stage and anyone who’s not had a vaccine, why could they not get a test?”

Mr Sweeney also said: “Pauline’s work to raise the plight of her business and the wider wedding industry has moved me.

“It is completely unacceptable for the Government to continue denying financial support to these businesses, while further restrictions ruin this year’s wedding season.

“To compound matters, big corporate interests have been free to set up huge events for Euro 2020 in Glasgow.

“We have also seen dancing permitted for exercise purposes, but not for weddings, so you can have a ceilidh as part of a club, but not at your wedding.

“The regulations are becoming nonsensical and undermining the credibility of public health advice from the Government.

“The double standard is obvious to most people and it is appalling.

“We urgently need a sanity check on the whole situation.”