Organisers of large events of 1000 or more people must check the vaccine passport status of 50% of attendees. 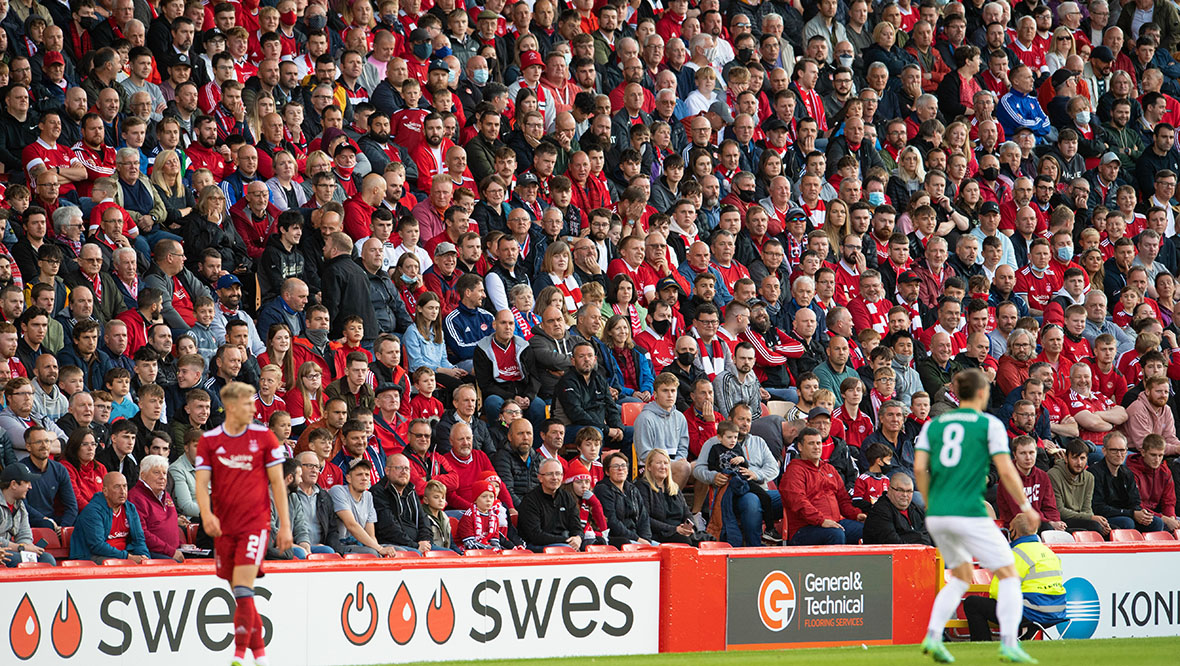 Restrictions on large-scale outdoor crowds in Scotland will be lifted from Monday, meaning stadiums can operate at full capacity for the return of the Scottish Premiership and the upcoming rugby Six Nations tournament.

First Minister Nicola Sturgeon said the restriction, which saw crowds at outdoor public events being capped at 500, could now be removed amid encouraging signs that the Omicron wave “may be at or close to the peak”.

New guidance announced on Tuesday stipulates that organisers of large events of 1000 or more people should check the vaccine passport status of at least 50% of attendees, rather than the current 20%.

Furthermore, from Monday the definition of “fully vaccinated” will include having a booster if a second dose of coronavirus vaccine was received more than four months ago.

Sturgeon told MSPs: “The situation in Scotland just now is undoubtedly serious but perhaps less so than it might have been, and there are also some signs that we may be starting to turn a corner.

“That said, the position is still fragile and significant uncertainties remain. We do not yet know what impact the post-Christmas return to work and school will have on the level of infection.

“What we do know is that staff absences resulting from high levels of infection are causing disruption in the economy and in critical services and that the NHS remains under very severe pressure indeed.

“Our tentative view (is) that although significant uncertainties remain in both the data and the immediate period ahead, there are nevertheless some grounds for cautious optimism that a combination of the protective measures introduced before Christmas, responsible action on the part of the general public, and the rapid delivery of booster vaccines has had a positive impact.”

The Scottish Government also hopes to lift other restrictions affecting the hospitality industry that came into force just after Christmas.

Sturgeon said it is the Government’s intention to lift limits on indoor live events, table service in hospitality and distancing in indoor public pleases from 24 January.

But that will be confirmed in a statement to the Scottish Parliament next week.

Numbers at indoor public events are currently limited to 100 standing or 200 seated. But the restrictions do not apply to private events such as weddings.

Pubs and other venues selling alcohol are required to offer table service only, while indoor hospitality and leisure venues need to ensure one-metre social distancing between groups of people who are attending together.

Nightclubs have also had to close their doors again.

Sturgeon told MSPs it might be necessary to extend vaccine passports to other venues as “a necessary protection” if other protection measures are lifted.

Other baseline measures – such as the requirement to wear face coverings in indoor public places and to work from home when possible – remain in place.

As does guidance to limit contact with people in other households and to limit indoor gatherings to a maximum of three households.

She said: “We are not advising people to cut all social interaction. That simply isn’t practical, and has a serious impact on mental health and wellbeing.

“But trying to limit social interactions remains a sensible step at this stage. It helps stem to some extent increases in transmission – and so has a collective benefit.”

A further 16 people have died within 28 days of a positive test, taking the total number of deaths under the daily measurement to 9950.

The First Minister said the Scottish Government’s central projection last month that new infections could reach 50,000 a day by early January has not so far materialised.

“Instead we estimate that the total number of new infections a day in early January, not just those recorded through positive PCR tests, may have been around 30,000,” she added.

Scottish Tory leader Douglas Ross told the First Minister: “People across Scotland got their booster, took tests, self isolated when they needed to.

“They were cautious to protect their families, and especially careful about the vulnerable. That’s why the data is more positive.

“The people of Scotland got this right, not the Government.”

Arguing that the public had “already learned to live with Covid”, he told Sturgeon that ministers have to “trust their judgment far more as we move forward”.

Sturgeon said the progress that had been made was “down to a combination” of vaccination, the booster delivery, the response from the public and “some of the sensible steps that have been taken”.

She pledged: “We will continue to take balanced, cautious steps to try to make sure our progress out of this phase is one way and we don’t end up going backwards.”

Scottish Labour leader Anas Sarwar said that a “new phase of the pandemic must mean a new approach” to tackling the virus which “recognises we will be living with Covid in some form for years to come”.

He insisted: “People cannot live their lives waiting for ad hoc updates on what the rules will be day-to-day.”

Meanwhile, Scottish Lib Dem leader Alexander Cole-Hamilton said that the continued use of the “Covid ID scheme” was “rather concerning”.

He added: “The prospect of rolling this out to a new array of venues, particularly when many of those venues are pulling themselves off the mat following the latest hospitality rules, is also highly concerning.”