NHS insists it’s ready for a second wave of coronavirus

Dr Abby Gunn and Nurse Eilidh Jack are among the thousands of NHS staff at the frontline of tackling Covid-19. 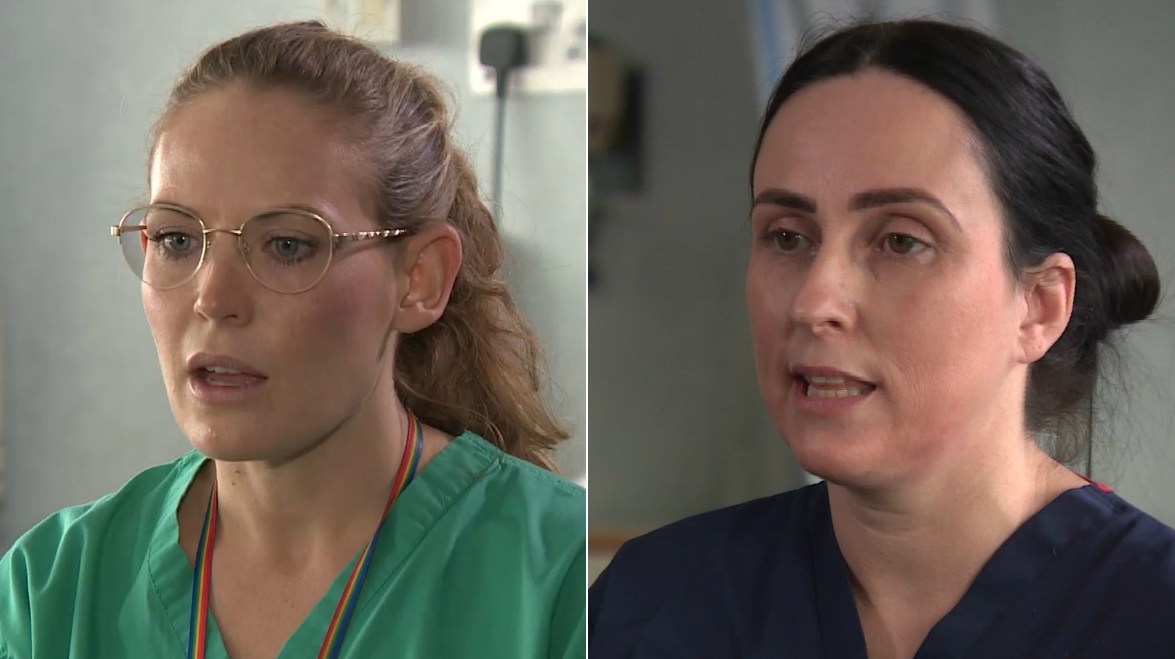 The NHS in Scotland has learned lessons from the Covid-19 pandemic so far and is better prepared for any second wave, say frontline workers.

Thousands of Scots have lost their lives to coronavirus while healthcare workers have found themselves in the vanguard of a fight against a new and deadly disease.

Nearly five months into a pandemic that looks like it could be about to accelerate again in parts of Europe, NHS workers are looking ahead to the possibility of cases rising again.

STV’s Scotland Tonight programme spoke to clinicians at Inverclyde Royal Hospital as part of a special to be aired at 7.30pm on Thursday.

Dr Abby Gunn usually works as a stroke consultant, but when Covid hit, she stepped up to lead the strategic response to the virus at Inverclyde Royal Hospital.

A cluster of cases in Inverclyde is currently being investigated, but when we spoke to Dr Gunn, the hospital’s coronavirus ward had not seen any new positive cases since June.

Dr Gunn says staff remain vigilant, however, and view a second major outbreak of the virus as a “realistic possibility”.

Dealing with the first wave means there is now a “wealth of experience” in the NHS when it comes to tackling Covid-19, she said.

Dr Gunn added: “I would say we would be well-positioned for a second wave if that were to come.”

However, the key word for her when it comes to handling this pandemic is “planning” – at a national and governmental level as well as locally.

Inverclyde has had the highest crude Covid death rate of any council area in Scotland, with 15 deaths per 10,000 people – around twice the national average.

The area also has some of the poorest parts of the country, with the prevalence of the virus and poverty increasingly linked by studies.

“We have a deprived population locally,” said Dr Gunn.

“We anticipated we were going to have deaths. We had seen that from across the world.”

But another issue, she added, is that coronavirus “arrived early” in Inverclyde.

She believes that when the first case was confirmed in the area on March 12 – nearly two weeks before lockdown began – transmission of the virus through the community was already well under way.

“Yet we were still doing some of the real-time planning after we had the first positive case.

“And I think it’s a real lesson about global health.”

Nurse Eilidh Jack has worked on the frontline at Inverclyde Royal Hospital throughout the pandemic.

“We need to be open-minded there is a possibility that we will potentially have a second wave,” she said.

“I think from the first wave we have learned how to plan, put things in place.”

In the event of a second wave, all that planning would be “put back into place”, Ms Jack said.

‘We were nearly overwhelmed’

As governments in the UK and around Europe scrambled to fashion increasingly severe responses to spiralling cases of Covid-19, it was up to frontline NHS staff to deal with the first wave of patients.

“Everybody was stressed,” recalled Ms Jack.

“It was so different to what we were used to.

“We didn’t really have a lot of information.

“We were taking a lot of information from other countries around the world, so we didn’t really know what to expect.”

“We were very close to being overwhelmed and at one point at the peak of our pandemic there were only Covid patients admitted to the hospital.”

When lockdown was finally announced on March 23, Dr Gunn recalled a feeling of relief.

She explained: “I was relieved because I have two children and they were at school.

“As I saw it building and building down south and moving north and arriving in Inverclyde, I was concerned that lockdown perhaps hadn’t happened at an optimum time because we knew it was already in our community.”

At one stage at Inverclyde Royal, there were no non-Covid patients in the hospital at all.

Six beds were crammed into what was usually a two-bed critical care unit.

“We knew that a certain proportion of patients with Covid-19 would require critical care,” said Dr Gunn.

“But as we were early in high peak here, we were very close to being overwhelmed and at one point at the peak of our pandemic there were only Covid patients admitted to the hospital.

“Every ward and every room that you went to had Covid-19 in the hospital.”

“What kind of deaths would they have and would we be able to make them feel better and give them a good death?”

For Ms Jack, the hardest part of the pandemic as a frontline nurse was the restrictions on relatives being able to visit ill loved ones.

“What I found most difficult was patients who were at end of life and you couldn’t have their family member with them initially,” she said.

“That was very difficult. You were communicating over the phone with these patients’ relatives.

“It must have been so difficult for them on the other end of the phone, knowing they couldn’t be there with their loved one in their final hours.”