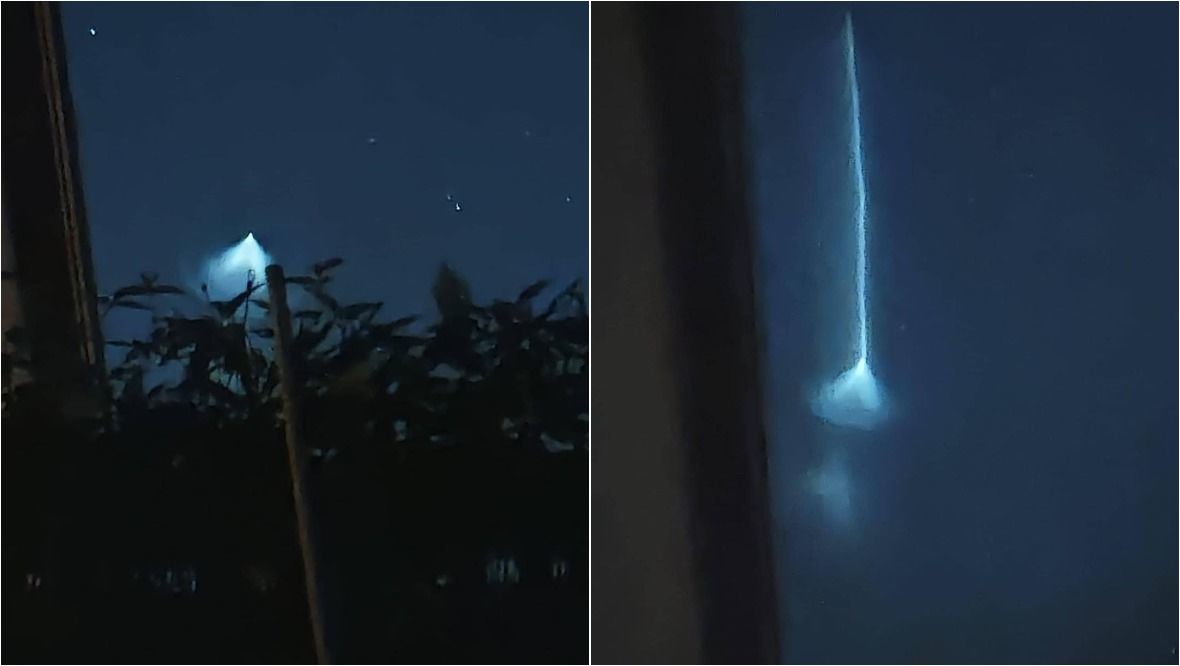 A rocket transporting satellites built by NASA to monitor the Earth’s land surface created a bright blue light that was visible in the skies above Scotland late on Monday night.

Landsat 9’s Atlas rocket had earlier lifted off from Vandenberg Space Force Base in California as part of a joint mission with the US Geological Survey (USGS).

People living across Scotland reported seeing a bright blue light in the sky as the satellite entered the atmosphere over northern Europe.

Sam Gleddinning was at his cottage in Lamington, South Lanarkshire, when he spotted a light in the sky and started to film it.

“We had no idea what it was. We wondered if it was a search light from a helicopter.”

He told STV News: “We had no idea what it was. We wondered if it was a search light from a helicopter but it was too high.”

Upon discovering the light came from the NASA rocket, he added: “We were quite surprised because you don’t expect to see a rocket over Scotland.

“We found the launch on YouTube and watched the process of the lift off and the beginning of their journey.”

NASA said Landsat 9 is performing as expected as it travels to its final orbital altitude of 438 miles (705 kilometers).

“NASA uses the unique assets of our own unprecedented fleet, as well as the instruments of other nations, to study our own planet and its climate systems,” said NASA administrator Bill Nelson.

“With a 50-year data bank to build on, Landsat 9 will take this historic and invaluable global programme to the next level.”

The first Landsat satellite launched in 1972. Since then, NASA has always kept a Landsat in orbit to collect images of the physical material covering Earth’s surface and changes to land usage.

“The Landsat mission is like no other,” said Karen St. Germain, director of the Earth Science Division at NASA Headquarters in Washington.

“For nearly 50 years, Landsat satellites observed our home planet, providing an unparalleled record of how its surface has changed over timescales from days to decades.”

“Landsat 9 will be our new eyes in the sky when it comes to observing our changing planet,” said Thomas Zurbuchen, associate administrator for science at NASA.

“Working in tandem with the other Landsat satellites, as well as our European Space Agency partners who operate the Sentintel-2 satellites, we are getting a more comprehensive look at Earth than ever before.

“With these satellites working together in orbit, we’ll have observations of any given place on our planet every two days. This is incredibly important for tracking things like crop growth and helping decision makers monitor the overall health of Earth and its natural resources.”