People across Scotland gathered to watch the historic event unfold and pay respects to the late monarch. 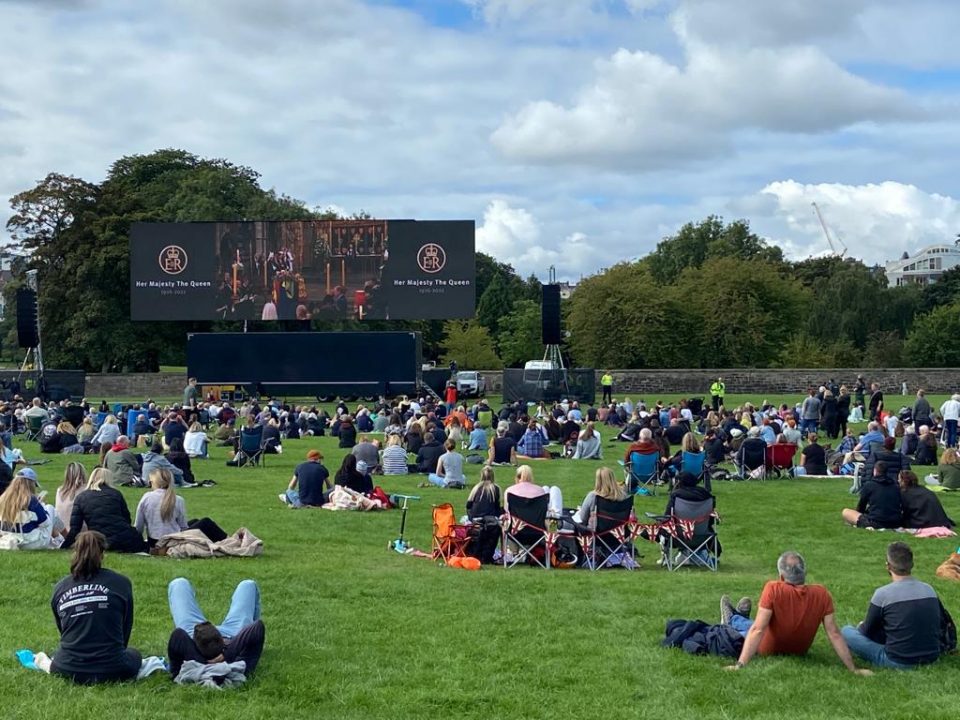 The funeral of Queen Elizabeth II was marked across Scotland with screenings and ceremonies taking place across the country.

While tens of thousands lined the streets of London and Westminster to honour the Queen, people came together to mourn and celebrate the life of the monarch around Scotland.

As a result of the bank holiday, many businesses, schools and universities were closed for the day as people came together to mark the event.

A large outdoor screening of the service was set up in Edinburgh’s Holyrood Park for mourners to watch together, while the historic occasion was marked with other events across the country.

Among those watching the the big screen in Edinburgh was Austrian student Emilia Wolfbauer, who said she had “goosebumps” when she saw how many people had gathered to watch.

She said: “Seeing everybody being sad, I got goosebumps. It was really touching and very sad.”

In Glasgow, Vue cinemas at St Enoch’s Centre and Glasgow Fort hosted sold out screenings of the funeral for those wishing to experience the event on the big screen.

Meanwhile care homes across the country screened the funeral for residents to see. Rubislaw Park Care Home in Aberdeen marked the historic occasion with a piper who played for residents before the service began.

Students and staff at St Andrew’s University came together with local residents to watch the funeral at Younger Hall, which was opened by the Queen Mother in 1929.

Gordonstoun boarding school in Moray, where King Charles III was a pupil, held a screening of the day’s events for staff and students.

Flowers, cards and tributes have also been laid at Holyrood Palace in tribute to the Queen.

Erskine Veterans Charity left personal messages on cards alongside bunches of tulips on the grounds.

Members of charity, who support veterans across four care homes in Scotland, marked the day by sharing memories and acknowledgements of what the Queen and her legacy meant to them.

In a statement she said: “The state funeral for Her Majesty will be one of the most momentous occasions in recent history, with people from around the world watching and paying their respect.

“She was the great constant and it is an honour to represent Scotland at the service.”

She added: “As the Queen is laid to rest, it gives us a chance to reflect on the events of the past ten days which have provided a sincere, solemn and fitting tribute to our longest-reigning monarch.

“We knew how important Scotland was to the Queen and, over recent days, we have been reminded just how much Her Majesty meant to the people of Scotland.

“I am sure the ceremonial events in Edinburgh will live long in our national memory and today we will all bid a final and poignant goodbye to a deeply respected and much loved monarch.”