Aaron Connolly attempted to end his life, but has since gone on to set up an award-winning mental health initiative. 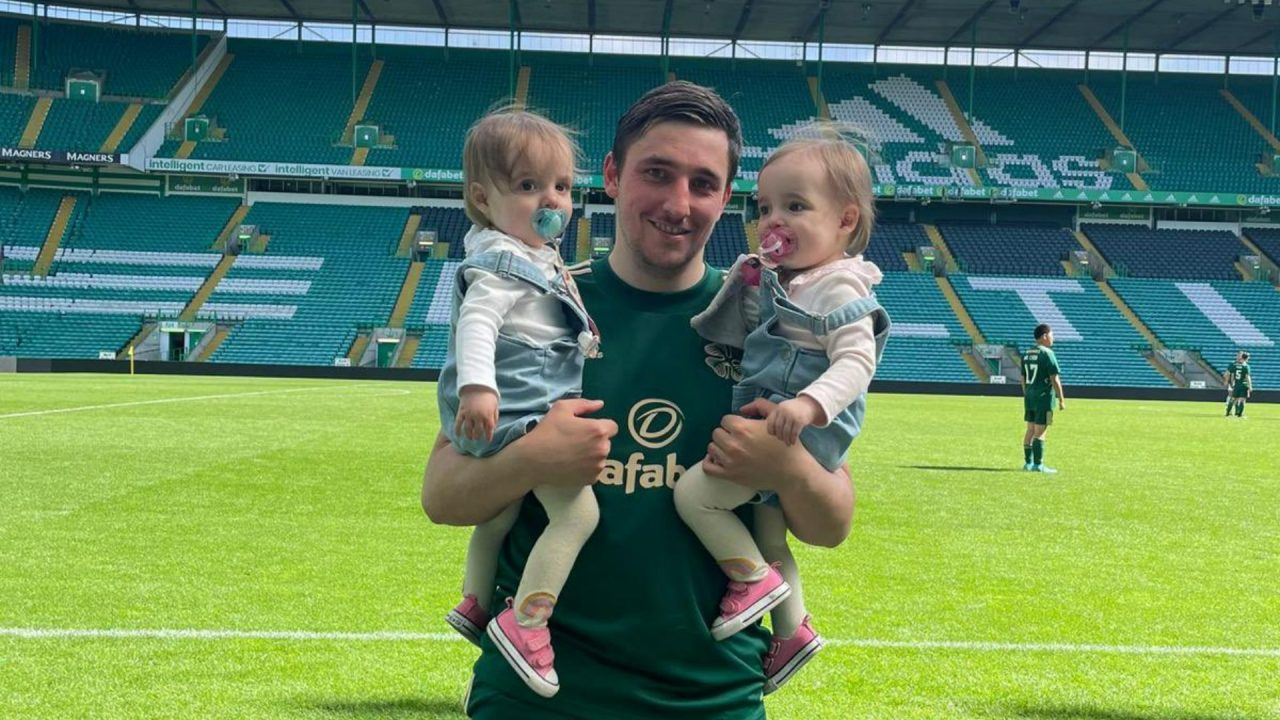 “I made the decision that I didn’t want to be here anymore.”

It was April 2019 and Aaron Connolly had told himself that he was becoming a burden to those around him.

At 27 years old, he was feeling burnt out mentally and physically, balancing the demands of a high pressure job and raising a young family.

It was at that point that suicide started to feel like an option for him – in a belief that his choice was between suffering through the pain or ending his life.

During a Friday night out in Edinburgh, Aaron went missing.

It sparked a police search as an appeal was made over his whereabouts.

He had left goodbye messages to his partner, Siobhan, having decided to end his life.

By Saturday evening, Aaron was found by officers in Glasgow and was taken to hospital, where he underwent a period of recovery.

Looking back, he tells STV News that it was a “traumatic and difficult” time in his life.

He also co-founded the ‘Time to Tackle‘ initiative, which seeks to help improve wellbeing through football therapy.

Earlier this year, it was given a Silver Award by UEFA for Best Social Initiative.

Aaron says he is “very grateful” that he survived his suicide attempt.

And he has urged people to speak about their mental health if they are struggling, as well as seeking medical help if they need to do so.

“You know, my son was only three at the time. We’d been married a couple of years. And I think from the outside looking in, people would have thought that my life was great and I’m not even going to dispute that.

“But I think I had really stopped looking after my mental well-being. My job at the time needed me to be in the office a lot, 14, 15 hour days.

“And I made the grave mistake of not really speaking about it, despite having depression, anxiety, for a long, long time. You know, my wife Siobhan was going through, she had gone through a surgery at that time.

“So she had what I perceived at the time to be a real physical ailment… and I probably told myself that I was becoming a burden and that I couldn’t burden her again with my struggles.”

Aaron explained that it started out for him by experiencing a low mood and being unable to concentrate at work.

He said that things then “quickly snowballed” and he started to tell himself that he was a burden.

And he admits that he hadn’t accepted that he was struggling with illness at the time.

“I started to think, you know, is it going to be like this for my full life?,” he told STV News.

“I hadn’t accepted that I had an illness probably. It felt like every couple of years I was going through a battle again or what I call an episode, but there may be better terms for it.

“I felt like that was happening every couple of years and for about the week leading up to the attempt, suicide started to become an option in my mind, (it) started to feel like a choice between suffering through this pain or ending it all.

Aaron explained how irrational thoughts can seem like reality in the moment, as he set out how he felt he was being unfair to wife, Siobhan.

He said: “I had a young son and I didn’t want my son to see his dad every couple of years go down this rabbit-hole of depression again and have no energy and not be able to play with him, not be able to engage with him, (I) started to feel like he would be better off without me.

“I felt like my wife had lifted me up so many times previously that it would be unfair to ask from her to do that again and unfair to ask her to continue to be with me beyond this point.

“You know, when you talk about these things openly you can start to rationalise them or people can help you rationalise those thoughts that are completely irrational. But in that moment, it feels like reality to you.

“I made the decision that I didn’t want to be here anymore. I don’t think I ever wanted to die, but I just didn’t want to live in the way that I was living.

“And the only way that I felt I could get out of that was completing suicide. And I’m very grateful that I didn’t.”

The now 30-year-old expressed his gratitude that he was found on the night of his suicide attempt and taken to hospital.

“I’m very, very grateful that I managed to get through and I survived and I was taken to hospital on that night I went missing,” he said.

“I’d sent goodbye messages to Siobhan and thankfully I was found, and I was taken to hospital and I had to then engage in recovery.

“And obviously, that was a really traumatic and difficult period. But I think that’s probably the best recollection I have of it, without going into the detail of the attempt, that’s the recollection of my thought process around the time and where I was at in my life.”

Following his time in hospital, Aaron set out to form a place where he could go once a week that would help in his recovery.

He had tried other support groups before, but struggled to engage with them and found it difficult to speak in group environments.

It was then that he and his wife brainstormed ideas for an outlet that could not just help him, but perhaps others too.

“Like most boys and girls in the West of Scotland, and nationwide, I wanted to be a footballer,” he said.

“You know, people come and go, friends come and go, jobs come and go as I’ve experienced and football’s always been there, whether it be playing or watching, or whatever.

“When I came out of hospital in 2019, I was really determined to create something, probably from a selfish perspective initially.

“I’d tried support groups in the past and really found it difficult to connect. I’ve probably changed now, but initially I struggled, I didn’t like speaking in group environments a lot, particularly about what was going on.

“So I would go to these support groups and I would sit and listen but I would really struggle to engage and connect with it.

“Coming out of hospital, I was really determined to create something that I could go to so that I had, call it a comfort blanket if you like, but something that I knew once a week I can go there and that will help in my recovery.”

What he and Siobhan created was ‘Time to Tackle’.

The concept was simple enough – book a pitch and get people playing.

And afterwards, if they felt comfortable, allow people the space to speak out about what they had going on in their lives.

“All I knew was that it was going to involve football in some way because I loved football,” explained Aaron.

“In the few months (since) being released in 2019, myself and Siobhan started chatting about it, you know, what could we do? Could we do something a little bit different?

“There was a lot of football groups out there, I could have just went and played five, seven-a-side with my mates but I really wanted it to have a mental health undertone.

“Not to be specifically mental health related but to really have a real platform where we could start to raise awareness of mental health issues, but also to support people.

“And we came up with a little concept, and I don’t know if people were doing it beforehand, but we thought we could get people to play football fairly easily.

“We can book a pitch, try and get some money together and I think we’ll get people to come along and play, it’s a free game of football and it’s probably the most popular sport in the country.

“So we decided that that was going to be the carrot to get people along, but we were really determined to provide a support network.”

Aaron said that being able to speak about and share experiences can help.

“We came up with the idea of, ‘let’s just encourage people to come into a room and chat afterwards’,” he said.

“We put on some biscuits, tea, coffee, soup, loads of different things over the course of time, but let’s just give them that environment to say, ‘look, if you want to, we’re going to go into the room, we’re going to sit down and we’re just going to chat and get to know each other’.

“And hopefully over time, we can start to build trust and we can create an environment where you won’t be judged and everyone will be supportive, and we’re all peers and we’ve all got different lived experiences.

“But maybe, if we talk about our own experiences and what we’re suffering and what we have suffered and overcome, then we can all learn a little bit from each other and we can all encourage one another to continue the fight.”

‘The UEFA award… I can’t even put it into words’

Earlier this year, the initiative was given a Silver Award by UEFA, an acknowledgement of the hard work carried out by Aaron and Siobhan.

He said it was “incredible” to receive the award from European football’s governing body.

And he paid tribute to all those who have taken part in the initiative and their bravery, which continues to inspire him.

“The UEFA award is just… I can’t even put it into words,” Aaron said.

“I look at UEFA as, my first thought and the first thought of most football fans, is UEFA Champions League and UEFA Europa League, the governing body for European football.

“To even think that someone within that governing body has noticed Time to Tackle doing work in the west of Scotland, just our little group that started off as myself and my wife on the couch one night in October 2019 just saying let’s book a five-a-side pitch and a room and let’s just wing it, for want of a better term.

“And to consider that being acknowledged by UEFA two and a half, two years down the line, it’s incredible and I think it shows the power of football.”

He added: “It makes me so proud, I know Siobhan is so proud and the people I’m most proud are the people who have engaged with us over the time.

“And the bravery that we see every Wednesday, every Friday night at our groups, it’s so inspiring, it’s inspiring to me every time.”