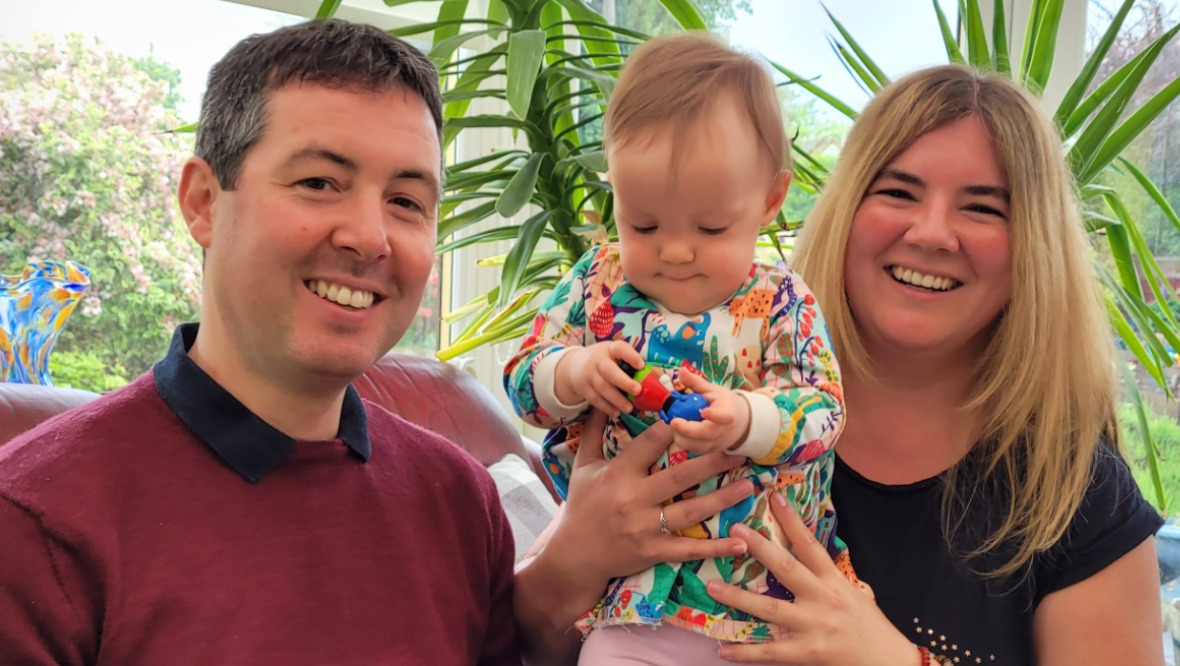 Lili weighed just one pound, six ounces when she was born at 24 weeks.

Her parents kept vigil at Edinburgh Royal Infirmary for 108 days, terrified they were going to lose her.

But eventually they got to bring her home, and 18 months on she’s hitting her milestones and doing well.

“We had heard this thing about Stevie Wonder,” dad Marc Armstrong told Scotland Tonight. “That he was premature and the reason he’s blind is because, while oxygen is so important, if you have too much, it can affect your eyes.

“If he was born now, they would probably be able to deal with that.

“We couldn’t have had better care. The nurses and doctors will never take any credit – they always say, ‘Lili’s done this’.

“Every time you say ‘thank you’, they say ‘thank her’. She’s just turned a year – corrected to when she was actually due – and she’s on track, thankfully.”

‘You could feel the fragility’

Charlie, who will turn five in October, was born three months before his mum’s due date, weighing three pounds, three ounces.

He’s now a thriving, healthy little boy – quite a contrast to those first tentative weeks.

“It’s quite a common image, people putting their hand in the incubator,” mum Helen Hubbard said.

“When I see that picture (above) – which I couldn’t look at for a long time – I remember [how] I almost completely covered him.

“His skin was thin, you could feel the fragility. I talk to him about the fact he was so small, but now he’s almost half my height. I can’t believe, when I look at the pictures, that was me.”

More than 4500 babies are premature in Scotland every year. Medical advances mean babies born as early as 22 weeks can be saved – but there’s little clinical knowledge about why they arrive early.

Lili and Charlie are among 400 children who make up the Theirworld Edinburgh Birth Cohort, which aims to answer that question.

The babies are tracked until adulthood, to examine the impact of pre-term birth on their development.

The study is part of wider work, which was fuelled by tragedy.

Their grief fuelled the launch of charity Theirworld and the Jennifer Brown Research Laboratory.

The cohort study involves everything from MRI scans to cognitive assessments.

Professor James Boardman, who heads up the lab, said: “It’s really important for us to work out how these birth events affect events that matter to parents and children themselves.

“This might be how well they settle in at school – do they form relationships easily, do they form employment, what grades do they get?

“To get a picture of the impact of prematurity on a person’s life, it really requires a look across their early childhood, middle childhood, adolescence, right up to young adulthood.

“I’m hopeful that we will understand more about why some women deliver prematurely. I think that that knowledge will come in time, from some of the work that we’re doing, and there’s an enormous global research endeavour going on to try and find out why that happens for some pregnancies.”

Both parents hope the researchers can learn from Lili and Charlie, something that inspires Sarah Brown.

She said: “What I love about the parents is that they’re so invested in understanding and learning for their child, but also knowing that that collective information can be shared with other families too.”

Scotland Tonight is on STV and the STV Player at 8.30pm on Thursday, June 16.