Highest number of daily Covid cases since start of pandemic

First Minister Nicola Sturgeon says new cases in Scotland have more than doubled over the past week. 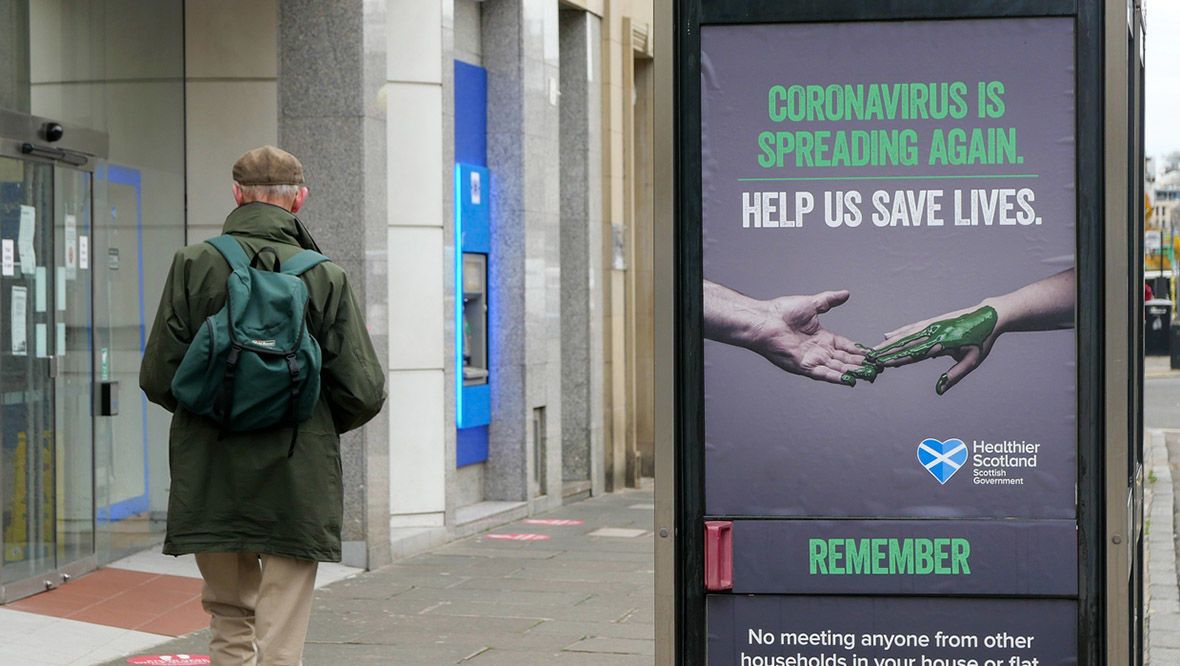 Scotland has recorded the highest number of daily coronavirus cases since the beginning of the pandemic.

First Minister Nicola Sturgeon announced on Tuesday ten more coronavirus-linked deaths and 4323 cases were recorded in the past 24 hours.

That takes the death toll under the daily measure – of people who first tested positive for the virus within the previous 28 days – to 8080.

She told a Scottish Government coronavirus briefing the daily test positivity rate is 14.5%, up from 12.4% the previous day.

“New cases in Scotland have more than doubled over the past week and that is one of the sharpest rises we have experienced at any point during the pandemic,” said Sturgeon.

“As a result of that, new cases are now slightly higher than the very high levels we saw in early July. In fact, today’s daily figure is the largest we have ever recorded in a single day – though it is worth remembering and I think it’s important to mention this for context – that we do more testing now than was the case certainly in the early stage of the pandemic.

“We always knew cases were likely to rise as restrictions eased and you heard us say that from these platforms in recent weeks, so to some extent what we are seeing now is not entirely unexpected. That said, the scale of the increase is still a cause of real concern, although again context is important.

“We know that vaccination is making a big difference. Indeed, that explains why so many of the new cases we are seeing just now are in younger people, who are less likely to have had both doses of vaccine at this stage.”

A total of 364 people were in hospital on Monday with recently confirmed Covid-19, up by eight on the previous day, with 43 patients in intensive care, up two.

Sturgeon said Scotland is now at a “fragile and potentially pivotal moment” in the fight against the virus as vaccinations have weakened the link between cases and serious harm but not completely broken it.

She added: “That means the rise in cases in the last week may well result in more people having to go to hospital in the coming days, perhaps requiring intensive care treatment, and, unfortunately, a rise in cases like this will still lead to an increase in numbers of people dying.

“That also means that, if this surge continues, and if it accelerates, and if we start to see evidence of a substantial increase in serious illness as a result, we cannot completely rule out having to reimpose some restrictions.

“Of course, we hope not to have to do that and, if we did, we would be as limited and as proportionate as possible.”

The First Minister also said the Scottish Government will begin an independent inquiry into the handling of the Covid-19 pandemic by the end of the year, it has said.

The public are being asked to share their views on the approach to the inquiry, following the publication of an “aims and principles” paper on Tuesday.

Setting up an inquiry into coronavirus was one of Sturgeon’s pledges for her first 100 days of the reformed Scottish Government following the election.

The inquiry will “scrutinise decisions taken in the course of this pandemic, and learn lessons for future pandemics”, the government says.

Members of the public will be able to share their ideas on the inquiry up to September 30.

Deputy first minister John Swinney said: “Since the early stages of our pandemic response we have been committed to a public inquiry into the handling of the pandemic in Scotland, to ensure that lessons are learned for the future.

“The publication of this aims and principles paper, as one of our 100 days commitments, is an important step towards the establishment of that inquiry.

“We will continue to listen to those affected by Covid-19, including bereaved families, on what they wish the public inquiry to focus on.

“Their feedback will be fundamental in reviewing the suggested approach set out here, and setting the terms of reference for an independent Scottish inquiry.

“Discussions are also ongoing with the UK Government on the planned four-nations inquiry, to ensure all areas that need to be considered are covered in a way that gives confidence to bereaved families and others.”

Ahead of this year’s Holyrood election, Sturgeon said a Covid public inquiry was a “priority” for the SNP. She said she wanted a four-nations inquiry into the pandemic by the end of the year.

“The SNP cannot hide behind Boris Johnson and claim that they have their hands tied by the absence of a four nations inquiry.”

Prime Minister Boris Johnson has already stated that an independent public inquiry with statutory powers into the handling of the coronavirus pandemic will begin in spring 2022.

Scottish Labour leader Anas Sarwar said the Scottish Government had failed to set up a Scottish-specific Covid inquiry within its first 100 days in power and was still seeking views.

He said: “This is shameful from the SNP government. Despite promising the people of Scotland that a Scottish-specific inquiry was on the SNP’s 100-day list, the SNP has shown that it simply is not a priority for them.

“They are dragging their feet, ignoring the pain of the grieving families and sacrifices of thousands of key workers.

“The SNP cannot hide behind Boris Johnson and claim that they have their hands tied by the absence of a four nations inquiry.

“This is not good enough. The thousands of Scots who have been affected by the pandemic deserve justice and they deserve it now.

“The First Minister must end the dither and delay and act now so that light can be shone on the Scottish Government’s handling of the pandemic, lessons can be learned, and justice can be done.”

“It’s a disgrace that they are only getting around to this now, when Nicola Sturgeon promised it would be a priority during the election campaign.

“This inquiry must uncover what went wrong throughout the pandemic, especially in our care homes. Major errors were made by the SNP Government that left our most vulnerable citizens unprotected.

“We will be pushing the government to ensure this inquiry gets the answers that families deserve, and not more of the same SNP spin and secrecy as they’ve had so far.”