First Minister Nicola Sturgeon made the announcement in the Scottish Parliament. 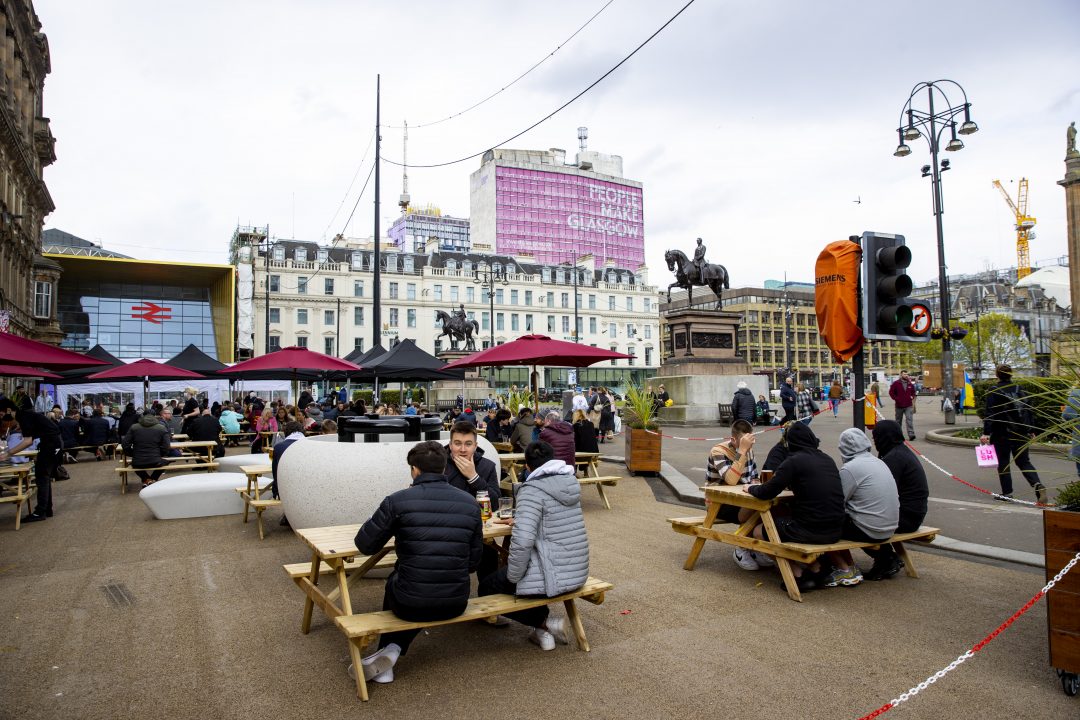 Glasgow will move from level three to level two from midnight on Friday into Saturday, First Minister Nicola Sturgeon has confirmed.

In a statement at the Scottish Parliament, she told MSPs that case numbers in Glasgow have been stabilising.

However, Sturgeon said that a number of other parts of Scotland currently in level two are not meeting the criteria to be moved down further.

The First Minister explained that Edinburgh and Midlothian, Dundee, East Dunbartonshire, Renfrewshire and East Renfrewshire, the three Ayrshires, North and South Lanarkshire and Clackmannanshire and Stirling, will all remain in level two.

The changes means that it will be possible for bars and restaurants in Glasgow to serve alcohol to customers indoors with a 10:30pm curfew in place, as well as a maximum of six people from three households being able to socialise in a private dwelling.

Glasgow had been kept under level three restrictions for a longer period than the rest of Scotland due to concern over rising case numbers.

Shetland, Orkney, the Western Isles and a number of small islands will be moved to level zero from Saturday.

Making the announcement, Sturgeon said: “These changes are significant. As someone who lives in Glasgow, I know they will make a huge difference to quality of life.”

She added: “I ask everyone to remember that though stable and starting to decline, cases in Glasgow do still remain high – so please continue to be cautious.”

The First Minister also outlined her optimism that there can be more normality “over the summer and beyond”.

“The vaccines are changing the game. And that means we can still be optimistic about our chances of much more normality over the summer and beyond,” she said.

“Indeed, in the days ahead, and while it may still feel a way off for many of us, we will publish more detailed work on what we expect life beyond Level 0 to look like, as that greater normality returns.

“Indeed, one reason for proceeding with more caution now, is to make it easier in the future to resume our progress to Level 0 – and then beyond.”

Responding to the statement in Parliament, Scottish Labour leader Anas Sarwar said: “This is largely welcome news for people in Glasgow and many across the country.

“But, I know that for many in those parts of Scotland that were expecting to move down a level, this news will come as a bitter blow.

“I want to focus on our response in hotspot areas. It is paramount that we design proper protocols for what happens in current and future hotspot areas, learning from the Glasgow experience.

“Those protocols must include walk-in vaccination centres for everyone aged over 18, the mass roll-out of PCR tests, increased support for local businesses and greater access to isolation support grants.

“That must be our first point of call in future outbreaks, not further lockdowns which damage the economy and have a negative effect on people’s mental health and wellbeing.”

Scottish Conservative leader Douglas Ross said: “For people all over the country, in 14 of the 32 local council areas, today’s statement is a disappointing setback.

“Half of the country will move forward, while the rest remain stuck in limbo with no clear idea of when the restrictions will ease.

“We understand the need for caution, but we also believe more emphasis needs to be placed on the impact of these restrictions on businesses, on jobs, and on people’s mental and physical health.

“We believe a more local approach is necessary, with targeted interventions to tackle local outbreaks, instead of sweeping measures.”