Glasgow and Moray to remain under level three Covid restrictions

First Minister says both local authority areas will not move to level two on Monday along with the rest of mainland Scotland. 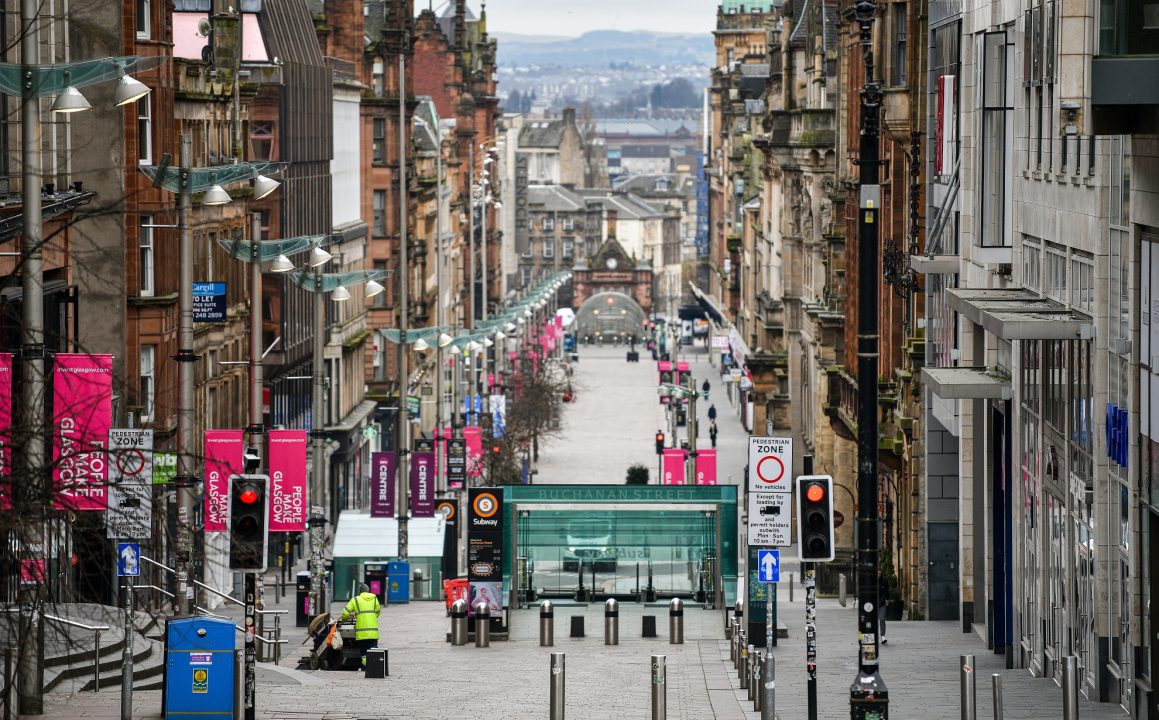 Glasgow and Moray will not move to level two coronavirus restrictions along with the rest of mainland Scotland on Monday due to concern over rising cases, First Minister Nicola Sturgeon said on Friday.

Speaking in Parliament, she told MSPs that both local authority areas will remain in level three of the Scottish Government’s strategic framework for at least another week.

NHS Greater Glasgow and Clyde health board is encouraging people, particularly those living in the most affected areas of Glasgow, to visit their local asymptomatic testing centre and take a Covid-19 test.

Sturgeon said there was evidence that the outbreak in Glasgow was being driven by the Indian B.1.617.2 variant, adding that the situation in Scotland’s largest city is causing even more concern than the recent spike in cases in Moray.

She said: “An additional and very significant factor in Glasgow is evidence suggesting the outbreak, which is heavily centered at the moment in the south side of the city, is being driven by the so-called Indian variant.

“We do not yet have a full understanding of the impact of this variant including on the protection afforded by the vaccines. However, I do want to stress that nothing at this stage suggests that it is causing more severe illness.

“However, it is thought that this variant could be significantly more transmissable than even the Kent variant that was identified before Christmas and that alone calls for an appropriate degree of caution.”

The First Minister added she was optimistic that increased testing and vaccination would help to curb the increased spread of the virus, while also stressing that Scotland’s battle against coronavirus “remains good”.

Regarding the situation in Moray, she said: “Case numbers remain more than double the Scottish average and so the judgement of the local incident management team, which has informed this decision, is that it is prudent for Moray to remain at level three for a further week, so that we can be more confident that the situation is firmly under control.

“In my judgement, it is sensible though difficult to be cautious now and allow Moray to move with more confidence to level three, rather than ease restrictions prematurely and risk having to go backwards later.

“It is inevitable that as we continue to navigate our way through this pandemic, we will hit bumps in the road, however, if we exercise suitable caution as we’re seeking to do today, then even though that is difficult, we are much more likely to stay on the right track overall.”

Scotland recorded two coronavirus deaths and 215 new cases in the past 24 hours, according to the latest Scottish Government figures released on Friday.

It brings the death toll under this daily measure – of people who first tested positive for the virus within the previous 28 days – to 7664.

Of the 215 new cases, 110 were in the NHS Greater Glasgow and Clyde health board area. This was followed by 37 in NHS Lothian, 21 in NHS Lanarkshire, 16 in NHS Fife and 15 in NHS Grampian.

Friday’s announcement is also another blow to the hospitality sector in both Glasgow and Moray.

A drop to level two would mean widespread relaxations over rules in hospitality and entertainment, including venues being able to serve alcohol indoors and the reopening of cinemas, theatres and casinos.

Andrew McRae, the Federation of Small Businesses Scotland policy chairman, said the news was “crushing” for businesses and their customers.

He said: “The damage of this change, especially in Glasgow, is exacerbated by the lateness of this announcement.

“While the action proposed may or may not be necessary, pushing it out the door at close of play on a Friday will further undermine independent businesses.”

He said: “There will be many businesses that have been planning and incurring costs to move to level two operations and once again they are caught up in developments outside their control.

“We are very keen to see lessons learned quickly about the management of these spikes through testing and vaccination so that lockdowns on such a wide geographical basis do not need to be an ongoing tactic.

“Both UK and Scottish Governments should also review the availability of financial support to businesses caught up in local lockdowns.  We do welcome the intention to review within one week and sincerely hope this is brought under control swiftly.”

Mario Gizzi, owner of The DRG group which owns brand such as Di Maggio’s and Cafe Andaluz, branded Friday’s announcement an “absolute disgrace”.

He said: “Not only have our plans been thrown up in the air but it’s been done last thing on a Friday night.

“At just one of our sites, The Citizen in Glasgow, we’ve spent more than £6000 in staff costs getting ready and roughly the same in fresh produce.

“As a standalone unit, all this food will be wasted and can’t be transferred to another restaurant.

“It’s outrageous to have these hugely damaging decisions taken by people who have no idea of how the hospitality industry runs.”

Meanwhile, the Scottish Hospitality Group said it had asked the Scottish Government for advance warning of any changes on Wednesday and “did not get anything back”.

Spokesman Stephen Montgomery said: “We’re in exactly the situation we wanted to avoid for the hospitality businesses in Glasgow.

“Here we are a full year on and it seems decision-makers have learned nothing and it’s shameful to be treating people this way.

“Staff are getting ready for their shifts, or have been working flat out to prepare for opening, and have ordered stock. You can’t just turn this stuff on and off like flicking a light switch.”