Ten-year-old Grace Finn became an internet hit after pranking her mum every day for two weeks for charity. 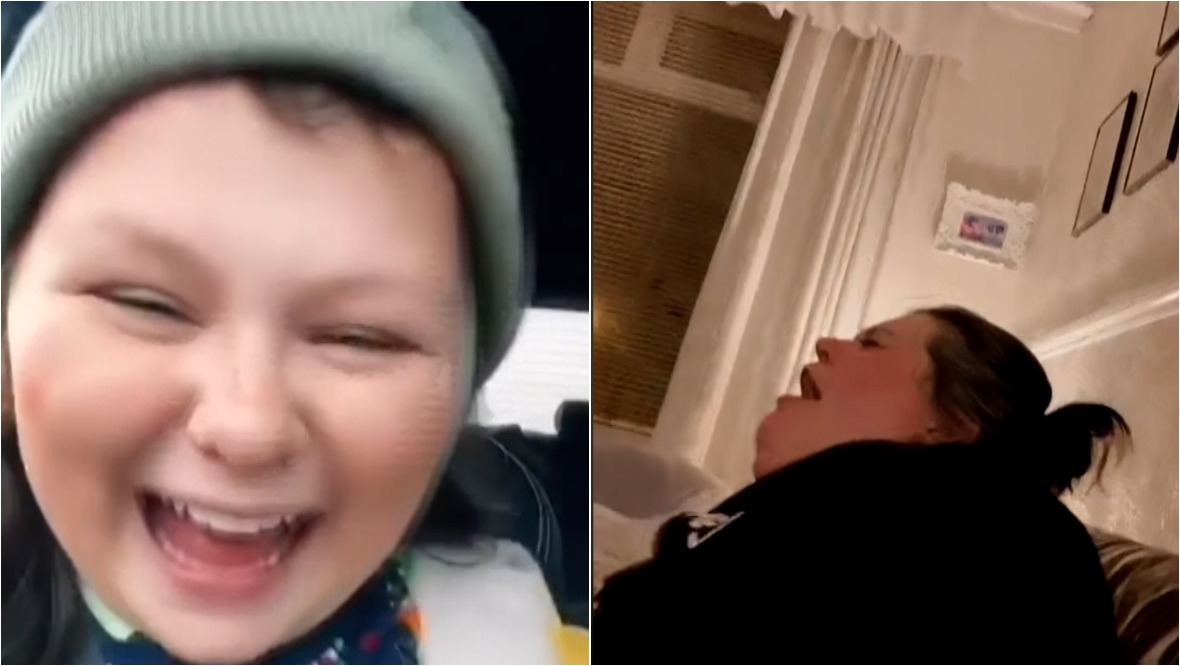 A ten-year-old girl has raised money for her local food bank by filming pranks on her mum and posting them online.

Grace Finn, from Glasgow, wanted to do her bit to help raise cash for her community to make sure every child gets a present this Christmas.

The schoolgirl played a prank on her mum every day for two weeks and uploaded the videos on social media.

She became a viral hit with thousands of likes and comments and in just ten days had raised over a thousand pounds.

The family spoke to Scotland Tonight as the programme caught up with various local heroes who have been spreading goodwill in their communities this festive season.

‘Christmas is going to be really hard for a lot of people this year so if we can spread a wee bit of joy and raise some money doing it then that’s worthwhile, isn’t it?’

Grace’s Mum Lorna said she is very proud of her daughter, she told Scotland Tonight: “We set the target for £500 and she’d got that within 24 hours and she then just kept trying to raise as much money as she could for local food banks who need it this Christmas”.

Grace was given the student of the month award at her school, as she donated half of the money to St Denis Primary as it has been a tough year for fundraising.

Lorna said: “It was lovely to get the letter home saying Grace had got her award to recognise her hard work.

“The school have been really supportive and think Grace is hilarious.

“I think she takes too much pleasure out of pranking me and me not having a comeback.”

Although a bit of fun, it’s all been for a good cause. Lorna added: “Christmas is going to be really hard for a lot of people this year so if we can spread a wee bit of joy and raise some money doing it then that’s worthwhile, isn’t it?”

He has also pledged to give each resident two presents to open on Christmas day.

Lee wants to bring cheer to the vulnerable and those who won’t be able to see loved ones over the festive period.

He said: “We’re not doing it for a pat on the back, we’re doing it because we care, we’re trying to do things right and trying to better people’s lives.

“So, hopefully we can spread the good news and the good word that other people follow suit and actually go out and help others in their regions.”

Lee, who’s known as “The Aberdeen Assassin” also recently launched an ‘Assassin Secret Santa’ drive to give children presents whose families may not be able to afford any.

“We’ve got 150 children we’ve got to find five gifts for to make sure their day is special and that they get the magical Christmas everyone needs this year.”

Children in Dundee who might not otherwise get presents will now have something to open on Christmas morning thanks to the legacy of seven-year-old Freya Skene who died in an accident in July.

Freya started a toy recycle scheme when she was just a toddler.

When she was three, she told her mum, Brooke Reid, she wanted to give toys to less fortunate children and they decided to donate them to Crossreach, a charity supporting people recovering from addiction and their families.

Brooke said: “Freya has always been a kind and caring person, she’s always wanted to do things to help.

‘Loads of young kids getting Christmas gifts every year. One act of kindness from a little girl, who was Freya.’

“I’ve always brought her up to help others and I’ve never lied to her about the challenges that everybody faces in life.

“We were cleaning out her room one day and she really wanted to give away her toys so we contacted my friend Amanda who’s mum does the Cross Reach recovery and they handed out the toys at the Christmas party.

“From that it’s just seen loads and loads of young kids getting Christmas gifts every year. One act of kindness from a little girl, who was Freya.”

The toy recycle has become an annual event which has now helped more than 500 children.

Brooke, 26, wanted to keep up the event, for Freya. “I would never want to let her down.”

“Just because I’m not having a good Christmas this year doesn’t mean everybody doesn’t have to have.

“Helping somebody else out by giving them toys really does so much for that person.

“Taking away that stress from a Mum or Dad is really beautiful to see.”

The CrossReach toy recycle is being held on December 18 at Dundee’s Friary on Tulideph Road and Brooke will be volunteering at the event in her daughter’s honour.

Watch our full report on Scotland Tonight at 7.30pm on Thursday December 17.