Football clubs are pitching in for blood donation drive

Clubs from across Scotland have stepped up to make their stadia available for blood donations. 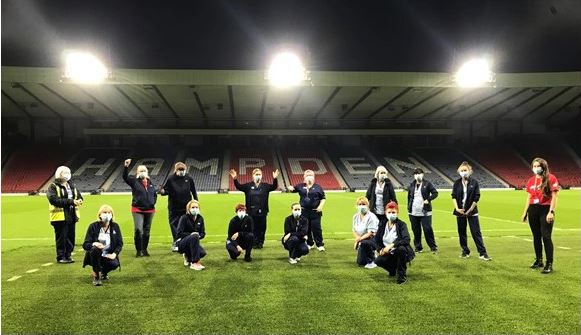 The Scottish National Blood Transfusion Service (SNBTS) is hoping to add more football stadiums to its fixture list after kicking off a new season of donations at Hampden Park.

Clubs from across Scotland have made their venues available after smaller donation events had to be cancelled due to social-distancing requirements.

Around half of all blood donated is collected at smaller local venues, meaning larger sites are now needed to meet demand.

Hampden, Partick Thistle and Hearts are among those making grounds available for life-saving blood donation sessions and the SNBTS is hoping more will sign up.

SNBTS associate director Lynne Willdigg said: “We’re obviously having a bit of fun with the messaging, but there’s a serious issue behind it.

“Giving blood saves lives. Every time you give blood, you could save or improve the lives of up to three people.

“However, because of the pandemic, we have an immediate, urgent need to find bigger venues for blood donation, and we’re making a plea for anywhere with large accessible spaces to come forward and help.

“Football clubs are brilliantly placed, and we’re over the moon that Hampden Stadium, Partick Thistle and Hearts football clubs have stood up to be counted – what they’re doing will make a quantifiable difference to the lives of patients around the country.

“We’re also hoping to reach a whole squad of new donors by working together with football clubs. Giving blood is classed as an essential activity, and Scotland needs 3000 new donor signings this year. No matter what tier you’re living in, if you’re fit and well and aged 17 to 65, you’re actively encouraged to give blood in Scotland.”

To give blood anywhere in Scotland, donors must make an appointment, which they can either do online at scotblood.co.uk, or by calling 0345 90 90 999 during office hours.

Anyone with a large venue that can be used can make contact via scotblood.co.uk.