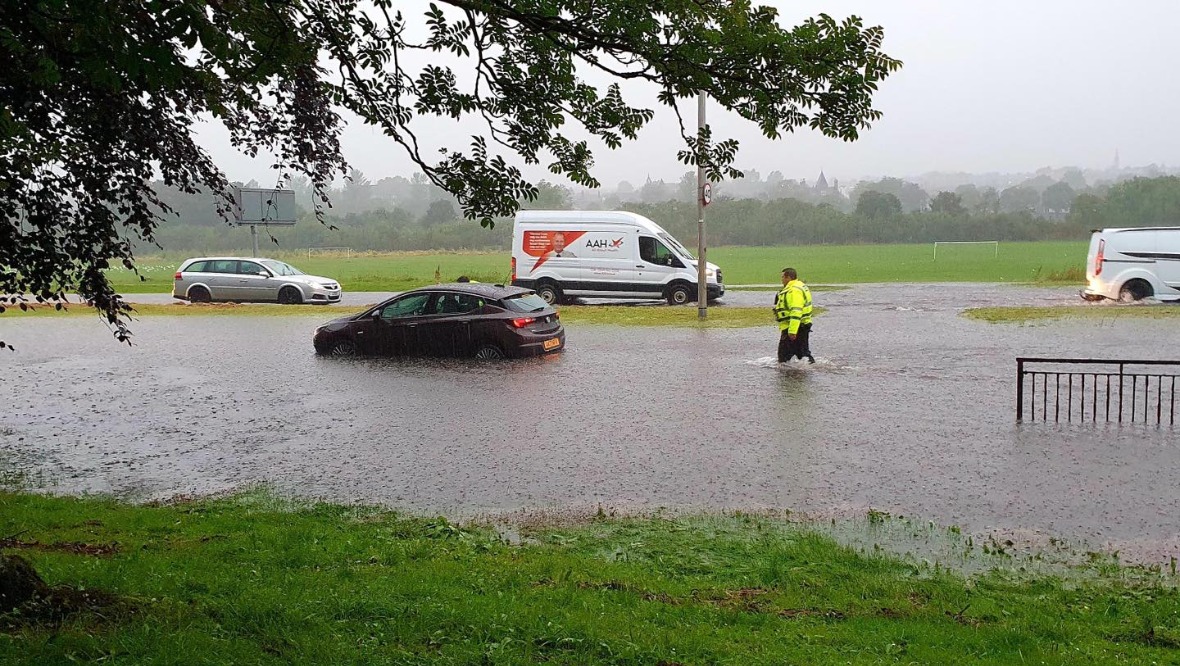 An amber warning was declared for the country’s east coast on Tuesday night until 9am on Wednesday, as adverse weather wreaked havoc in towns and cities.

A major incident was declared in Fife, where a number of schools closed, and people were evacuated from their homes.

A landslide meant hundreds of people had to be rescued at Pettycur Bay Holiday Park.

Adverse weather caused a pile-up at one of Victoria Hospital’s car parks, scenes which were described as “upsetting” by Monica Lennon MSP.

Locals said the storms in the capital were “like nothing they had ever seen”, as thunder and lightning rumbled across the city.

Meanwhile, the weather has caused severe damage on the A68 at Fala, Midlothian, which Amey maintenance crews are working to repair.

Amey added: “A diversion has been established and an investigation is taking place into the full extent of the damage.”

Further north Perth experienced the adverse weather, with the local authority closing off a number of roads on Wednesday morning.

The council said surface water has been causing problems at a number of other locations, while Perth High School has closed due to flooding.

Flooding has also caused difficult conditions in Aberdeen, with pictures showing deep surface water on the roads. A number of schools have also been closed.

STV meteorologist Sean Batty said: “The east of the country has experienced some horrendous conditions overnight with frequent lightning, hailstones and torrential downpours.

“It looks like Scotland has experienced over 1500 flashes of lightning through these storms with around 300-400 across the Lothians, Edinburgh, Fife, Falkirk and Clackmannanshire.

“I’ve not seen rainfall totals this high for a long time, with some of the heaviest downpours around Edinburgh, West Lothian, Falkirk, Perth, west and central Fife.

‘It looks like Scotland has experienced over 1500 flashes of lightning through these storms with around 300-400 across the Lothians, Edinburgh, Fife, Falkirk and Clackmannanshire.’

“From what I can see, it looks like 110mm of rain has fallen on the eastern side of Loch Leven in Scotlandwell and Kinnesswood. This is over a month’s worth of rainfall for this part of Fife.

“Heavy falls occurred in Perth city centre which has had around 80mm of rain from the storms, roughly what we’d expect in five weeks at this time of year. In one hour alone over 40mm of rain fell in the city, which is an astonishing amount of rain in that duration. That’s two thirds of a month’s rain in an hour.

“Falkirk was also badly affected by the storms with a month’s worth of rain falling here overnight.

“Edinburgh city centre had around 50mm, while further west in Ingliston there’s been 60mm. Around the capital is a good example of how rainfall can vary wildly in thunderstorms with Hermiston just two miles away from Ingliston getting 25mm.

“It’s an even bigger contrast to the east where Gullane only had 3mm and Haddington 2mm.”

The storms are expected to continue to track north and east through Wednesday morning to clear most of the mainland.

Shetland and Orkney will see these storms throughout the morning and into the early afternoon before easing.

More thunderstorms may develop later in southern areas and across the Highlands, Moray, Aberdeenshire and Perthshire.

Travel disruption was seen throughout eastern parts of the country, with ScotRail services delayed and in some instances cancelled.

In Perth trains were unable to run towards Inverness or depart south because of flooding in the station.