Firefighters to use life-saving naloxone in fight against drug deaths 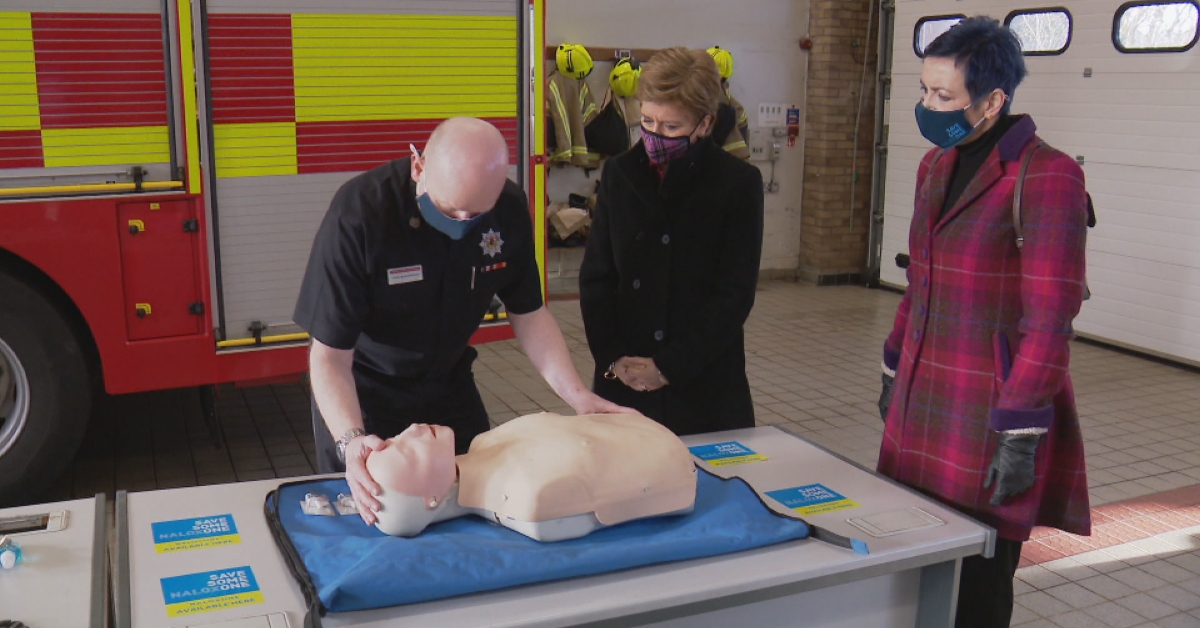 Firefighters are being offered the chance to become trained and equipped to help prevent drug deaths with overdose-reversing medication.

Scottish Ambulance Service personnel and police officers have already been using naloxone – a nasal spray which can reverse the effects of an opioid overdose.

It is hoped Scottish Fire and Rescue Service staff who volunteer for the programme will be able to administer the life-saving naloxone while they wait for an ambulance to arrive.

“I grew up in Glasgow and I lost my best friend at the age of 19 from a drugs overdose,” he said.

The firefighter’s friend had been suffering from drug addiction since he was 15-years-old.

‘I have the kit because I want to be in a position to save someone’s life.’

“This traumatic experience has stayed with me and so it was important for me to volunteer to carry naloxone.

“I have the kit because I want to be in a position to save someone’s life.”

Mr Blackwood has been trained to identify opioid overdoses and administer the medication.

“I think it’s everybody’s responsibility to try and help support people that are affected by drugs and everybody’s position to maybe save a life should it be a drugs overdose,” he said.

The First Minister thanked the Scottish Fire and Rescue Service (SFRS) for “the incredible job they do every day to save lives”.

Nicola Sturgeon said: “SFRS staff regularly interact with the public during operational incidents, prevention and protection work and community engagement and it is reassuring to know that if they come across a situation involving an opioid overdose that volunteers will be able to administer naloxone while they wait for an ambulance to arrive.”

Scottish Fire and Rescue Service staff will be able to volunteer to train in carrying and deploying naloxone with firefighters taught how to identify the signs and symptoms of an opioid overdose.

Assistant chief officer Stuart Stevens, SFRS director of service delivery, said: “We welcome funding from the Scottish Government to provide life-saving medication for some of the most vulnerable people in our communities.

“We will fully support volunteers within SFRS to complete training to safely administer naloxone to help prevent avoidable drug deaths from overdoses.

“This project highlights our commitment to working with partners to improve the safety and wellbeing of the people of Scotland.”

A naloxone information pack will be available to all SFRS staff and the service will seek volunteers from around the country to create a wide network of staff who are able to administer naloxone.

Sturgeon said naloxone was just one in a range of measures being used to tackle the public health emergency of drugs deaths.

There were 1007 suspected drug deaths in Scotland in the first nine months of 2021, according to official statistics.

Previous figures published by the National Records of Scotland revealed 1339 drug-related deaths in 2020 – a five per cent increase on the previous year’s statistics representing the largest number since records began in 1996.

The country continues to have the worst drug death rate in Europe, with 21.2 deaths per 1000 of the population, more than three-and-a-half times higher than the rest of the UK.

The First Minister said: “Of course, we want to help people long before they get to the point of a life-threatening overdose and we are working hard to increase the number of people in treatment backed by total funding of £250m over five years.”