Thousands of Scotland fans travelled to London last month for the Euro 2020 match against England. 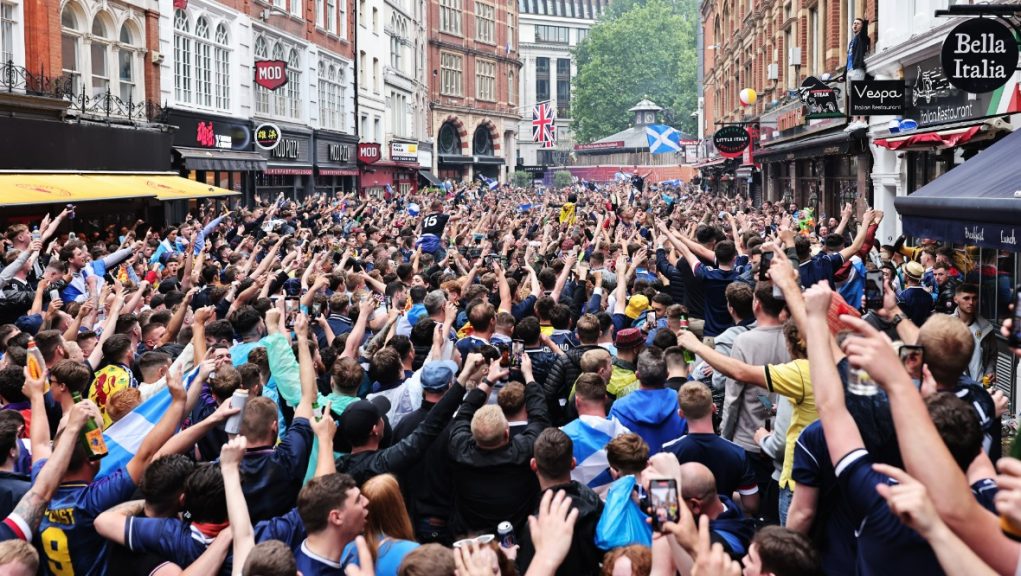 The rise in positive coronavirus tests in Scotland is “very clearly” linked to Scotland fans travelling to London for the Euro 2020 match against England, a public health expert has said.

Martin McKee, professor of European public health at the London School of Hygiene and Tropical Medicine, said the spike in positive cases “coincides very much” with the incubation period of the virus after the match at Wembley on Friday, June 18, which finished 0-0.

He was asked if the Euros tournament was “acting as some kind of super-spreader with the number of fans that have been travelling around the continent”.

McKee told Good Morning Scotland on Friday: “I think you in Scotland know very clearly that that is the case.

“We also have another example of Finnish fans who went to one of the Euros matches and 300 of them were infected.

“We can see very clearly in the Scottish data, because the increase coincides very much with what you would expect with the incubation period after the match but also the gender difference, because the cases, the increases seem much greater in men than in women.

“So I think when you put those two together it’s pretty clear that’s what’s been happening.”

Thousands of Scotland fans travelled to the UK capital for the fixture last month despite warnings not to if they did not have a ticket.

Scottish Government figures published on Thursday show there were 4234 positive tests over the past 24 hours – meaning the country recorded more than 4000 positive tests for the first time since the start of the pandemic.

Data from Public Health Scotland published on Wednesday showed there were almost 2000 people who attended a Euro 2020-related event while infected with the virus.

National clinical director Jason Leitch said travelling fans had undoubtedly contributed to Scotland’s recent spike and that the 2000 figure was likely less than the true number.

Leitch said: “To keep it in perspective, there were 32,000 positives since the Euros began.

“And 2000 of those positives, in their Test and Protect interviews, say they were at something to do with the Euros.

McKee added that the Delta variant of Covid-19 was “much more transmissible”, adding that “we need to be really very vigilant about it.”

He added “the vaccine is less effective against the Delta variant” than against the previously dominant Alpha variant.

He went on: “Hospitalisation numbers are going up.

“The probability of being hospitalised with Covid is clearly much less than it was during earlier waves.

“If they’re going up you need to do something to try and turn that around. It’s just simple mathematics.”

Figures show 275 people were in hospital on Wednesday with recently confirmed Covid-19, up 40, with 16 patients in intensive care, down three.