A Met Office amber warning has predicted heavy rain, storms and floods through the centre of mainland Scotland. 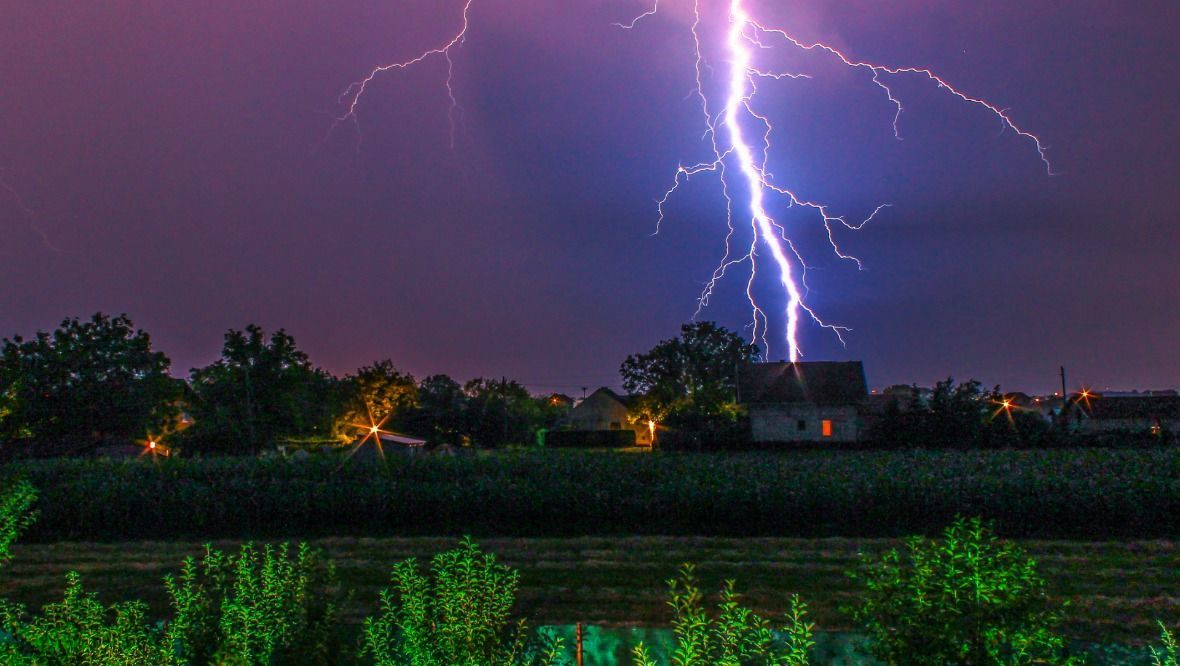 The Scottish Government’s emergency committee has been convened after an amber weather warning was issued for thunderstorms.

The Met Office forecasts heavy rain and storms through the centre of mainland Scotland, with an amber warning, the second most serious alert, in place for thunder until 10pm on Tuesday.

A yellow warning is also in place for a wider swathe of the country, but most coastal areas in the east and west are again expected to miss the worst of the weather.

An amber warning for rain will also be in effect until 6am tomorrow in the north, while a yellow warning for downpours will also last until the same time, taking all but the far north east, far north and far west of the country.

The Scottish Government Resilience Room (Sgorr) has been convened to respond to the alert and ensure preparations are in place.

Deputy First Minister John Swinney warned Scots against flooding, saying: “The decision by the Met Office to issue the amber warning for thunderstorms signals a potentially damaging and dangerous risk of flooding in some areas.

“Flooding could happen quickly, even in areas not usually prone to flooding.

“Please take extra care if you are out and about, do not attempt to walk or drive through flood water, avoid camping near watercourses and ensure water conditions are safe if spending time in the water.

“The Scottish Government is in close contact with local authorities and the emergency services to ensure people in the affected areas receive the latest information, advice and support where needed.”

STV meteorologist Sean Batty said: “For weeks most of the country has basked in hot sunshine, but as is usually the case this will go out with a bang.

“This happens because the heat builds under high pressure, which acts like a big lid over the country limiting vertical convection – which basically means only small clouds can form.

“Once this weather starts to shift, the lid comes off and allows all the heat that’s built up bubble up into huge clouds which bring thunderstorms, and that’s exactly what’s happening now.”

Throughout Tuesday afternoon and evening, thunderstorms will develop with the main focus down the middle of the Highlands, Perthshire, western Fife, Falkirk, Clackmannanshire, Edinburgh, West Lothian and the Borders.

Sean said: “This is where we have an amber weather warning in force.

“One of the reasons intense showers after dry conditions can be a problem is because the sun has spent weeks baking the ground solid.

“This means that it’ll take longer for rain to soak into the ground, so as you can imagine, a huge amount of rain in a short period means the rain has nowhere to go and runs towards low areas.

“This is the sort of situation that brings those images of underpasses flooded and the usual roads blocked by floods.”

Sean added: “On Wednesday it’s not so much thunderstorms, but persistent rain that’ll bring flood issues.

“This is most likely in the amber warning area stretching across Wester and Eastern Ross, Inverness, Nairn and Elgin.

“As much as 50-60mm may fall in some areas of Moray and the Highlands tomorrow and perhaps in excess of this in the hills.

“That means that there is a possibility of some locations getting near a month’s worth of rain on Wednesday alone.

“For those worried that summer is over, well don’t be, because our seasons don’t go through clean transitions, and there’s still several weeks left where hot and sunny conditions can redevelop.

“For now though it is looking changeable, although quieter weather returns for the weekend.”

Amber warning: From 12pm until 10pm on Tuesday.

Amber warning: From 6am on Wednesday until 6am on Thursday.

Yellow warning: From 12am on Wednesday until 6am on Thursday.

Stay safe in thunder and lightning

Driving in a thunderstorm