Saluting batteries fired 41 rounds in cities across the UK following the Duke of Edinburgh's death at the age of 99. 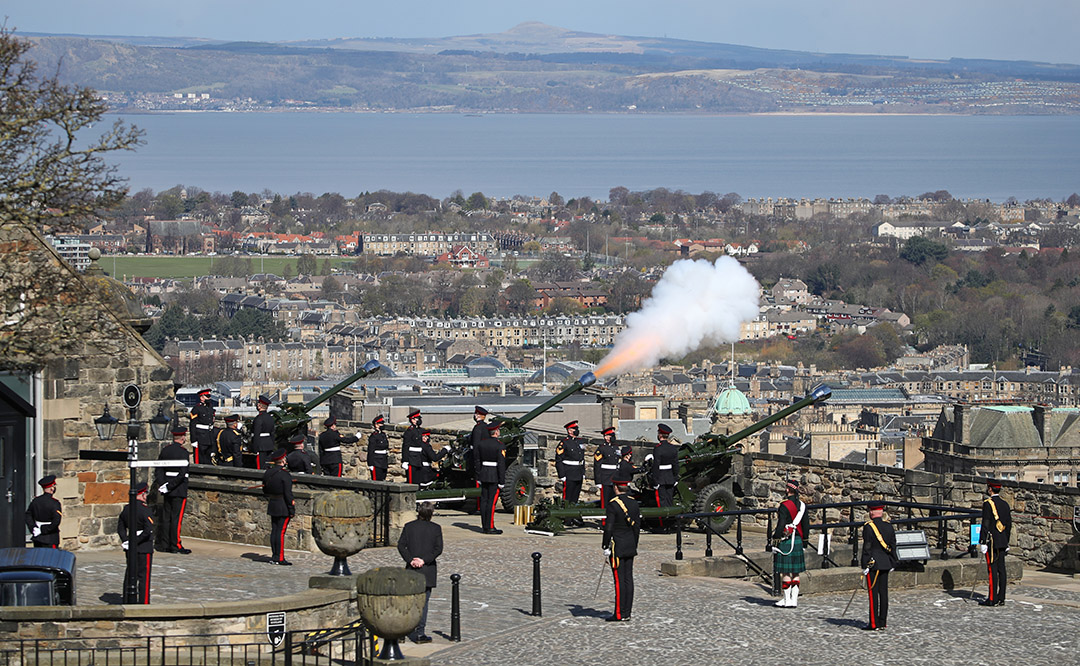 Gun salutes have been fired at Edinburgh Castle to mark the death of the Duke of Edinburgh at the age of 99.

Saluting batteries began firing 41 rounds at one round every minute from midday on Saturday in cities across the UK including London, Cardiff and Belfast, as well as from Royal Navy warships.

Buckingham Palace said Philip died peacefully in his sleep at Windsor Castle on Friday, two months before his 100th birthday, leaving the Queen and the royal family “mourning his loss”.

The public were encouraged to observe the gun salutes, which are fired to mark significant national events, on television or online, rather than gathering in crowds to watch outside.

Edward and the Countess of Wessex spent around an hour at the castle and Sophie told reporters “the Queen has been amazing” as they left Windsor in a Land Rover.

Two of his sons, the Duke of York and the Earl of Wessex, arrived at Windsor Castle on Saturday morning, while the Prince of Wales visited his mother there on Friday.

Details of the duke’s funeral, due to take place at St George’s Chapel, are also expected to be released this weekend – but the ongoing lockdown in England will affect plans.

Philip, famously described by the Queen as her “constant strength and guide”, was known to have wanted a minimum of fuss at his funeral.

Buckingham Palace said: “During the coronavirus pandemic, and in light of current Government advice and social distancing guidelines, modified funeral and ceremonial arrangements for His Royal Highness the Duke of Edinburgh are being considered by Her Majesty The Queen. Details will be confirmed in due course.”

Speaking on a BBC tribute on Friday evening, all four of Philip’s children remembered him as someone who had encouraged and supported them.

Charles described his father’s life as an “astonishing achievement” while Edward said his father had a “challenging role” but carried it out with the most “extraordinary flare”, and had never tried to overshadow the Queen.

The Princess Royal said she would best remember her father as “always being there”, someone to help with a problem or bounce ideas off, and the Duke of York recalled Philip reading to the family in the evenings.

An online book of condolence was opened on the royal family’s official website for the public to post personal tributes, while a steady stream of mourners left flowers outside both Buckingham Palace and Windsor Castle on Friday.

The Palace asked members of the public not to gather in crowds, saying: “Those wishing to express their condolences are asked to do so in the safest way possible, and not to gather at Royal Residences.”

The monarch may give a televised address in memory of her husband of more than 70 years – the longest-serving consort in British history – but details of any possible broadcast have yet to be confirmed.

Prime Minister Boris Johnson said Philip would be remembered for his Duke of Edinburgh’s Award scheme, that had “shaped and inspired the lives of countless young people”, as well as his “steadfast support” for the Queen.

During coronavirus lockdowns, Philip stayed at Windsor Castle with the Queen for their safety, alongside a reduced household of staff dubbed HMS Bubble.

The couple are thought to have spent more time together during the past 12 months, shielding from the virus, then they would in a normal year – a throwback to the early years of their marriage.

Philip had returned to Windsor Castle on March 16 to be reunited with the Queen after spending a month in hospital – his longest ever stay.

He initially received care for an infection but then underwent heart surgery for a pre-existing condition.

Union flags were flown at half mast at all royal residences as a mark of respect and Westminster Abbey – where the Queen and Philip married in 1947 – tolled its tenor bell once every 60 seconds, 99 times, during Friday evening.

A period of mourning is expected and any planned official royal events that fall within this period are likely to be postponed.

The Cabinet met at 5pm on Friday to pay tribute to the duke, and Parliament will be recalled from its Easter recess on Monday, a day earlier than its scheduled return.