Duke of Edinburgh laid to rest after family mourns at funeral 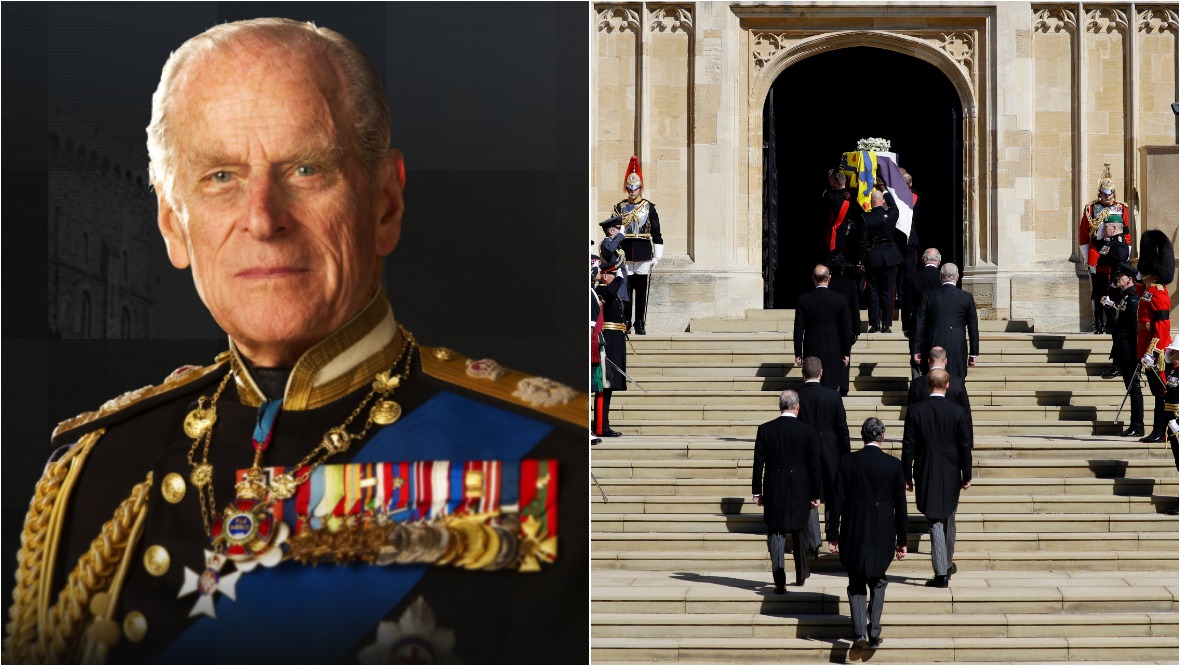 The nation fell silent in memory of the Duke of Edinburgh as his funeral marking a life of service, devotion and duty began.

The Queen and her family gathered to say farewell to Philip, who died peacefully just over a week ago at Windsor Castle and was hailed as the “grandfather” of the country by his son the Duke of York.

Covid-19 regulations reduced the scope of the service with public elements cancelled, mourners reduced from around 800 to just 30, and all guests wearing face masks and sitting apart.

As the funeral began the nation came to a halt to observe a minute’s silence in memory of the duke who died a few months short of his 100th birthday.

It came as part of nine locations that took part in the event. The guns fired at 3pm and then again at 3.01pm.

The Prince of Wales and Princess Royal had led senior royals in walking behind their father’s coffin the short distance from the castle to St George’s Chapel.

Philip’s coffin was carried on a custom-built Land Rover Defender hearse designed by the duke and modified over 16 years.

It was followed for part of its final journey by the Queen, who travelled in a Bentley with Lady Susan Hussey, with her trusted lady-in-waiting – with both wearing facemasks.

Watching as it passed were royal mourners including the Duchess of Cornwall, Duchess of Cambridge, Countess of Wessex and her children Viscount Severn and Lady Louise Windsor.

The Duke of Sussex and Duke of Cambridge joined the procession but were separated by their cousin Peter Phillips. They were seated opposite one another in St George’s Chapel during the service, with William next to wife Kate.

Cutting a solitary figure at the front of the quire, nearest the altar, the Queen sat apart from her children. There was a space left beside her where her husband of 73 years the duke would have sat.

During the service the choir sang Psalm 104, set to music by William Lovelady, as had been requested by the Duke of Edinburgh. Originally composed as a cantata in three movements, it was first sung in honour of Philip’s 75th birthday.

Philip was interred in the Royal Vault of St George’s Chapel.

His coffin was placed on a catafalque on a marble slab in the Quire and lowered into the vault by electric motor.

Nicola Sturgeon paid tribute to the Duke of Edinburgh, hailing his “longstanding ties to Scotland”.

The Scottish First Minister was among the many across the country to mark a silence at 3pm.

After the funeral, Sturgeon said: “On behalf of the people of Scotland, I once again express my deepest condolences to Her Majesty the Queen and members of the royal family.

“The many tributes paid to the Duke of Edinburgh in recent days have shown the depth of his contribution to public life over more than 70 years as well as his longstanding ties to Scotland.

“Many have reflected on his distinguished wartime record, his commitment to countless charities and organisations, and his love and support for the Queen throughout their marriage.

“Today, as the Queen and the royal family mourn the death of a loved one, we take this opportunity to celebrate and honour an extraordinary life.”

Pupils at the duke’s former school paid tribute to him by laying a wreath at sea in his memory.

Gordonstoun school remembered the duke during an event at Hopeman Harbour in Moray on Saturday.

Children gathered on the school’s yacht, Ocean Spirit, which was anchored off the harbour.

A sand artist created a tribute to the Duke of Edinburgh at Aberdeen Beach ahead of the prince’s funeral.

A group of veterans also paid their respects with a guard of honour.

One veteran said: “Well, I think we’re praising a hero, because he’s been some man in his life, you know, and he’s a veteran’s man.”

The Prime Minister appeared with his head bowed and dressed in black on the steps outside his country home in Chequers on the day of the Duke of Edinburgh’s funeral.

Johnson observed the minute’s silence at 3pm from Chequers ahead of the funeral service, after being unable to attend due to coronavirus restrictions.

Philip’s death left the monarchy grieving in private, but they made public appearances to recognise the support and condolences received throughout the week from the nation.