Coronavirus: Whole of Scotland moving to level zero on July 19

First Minister announces further easing of restrictions from next Monday. 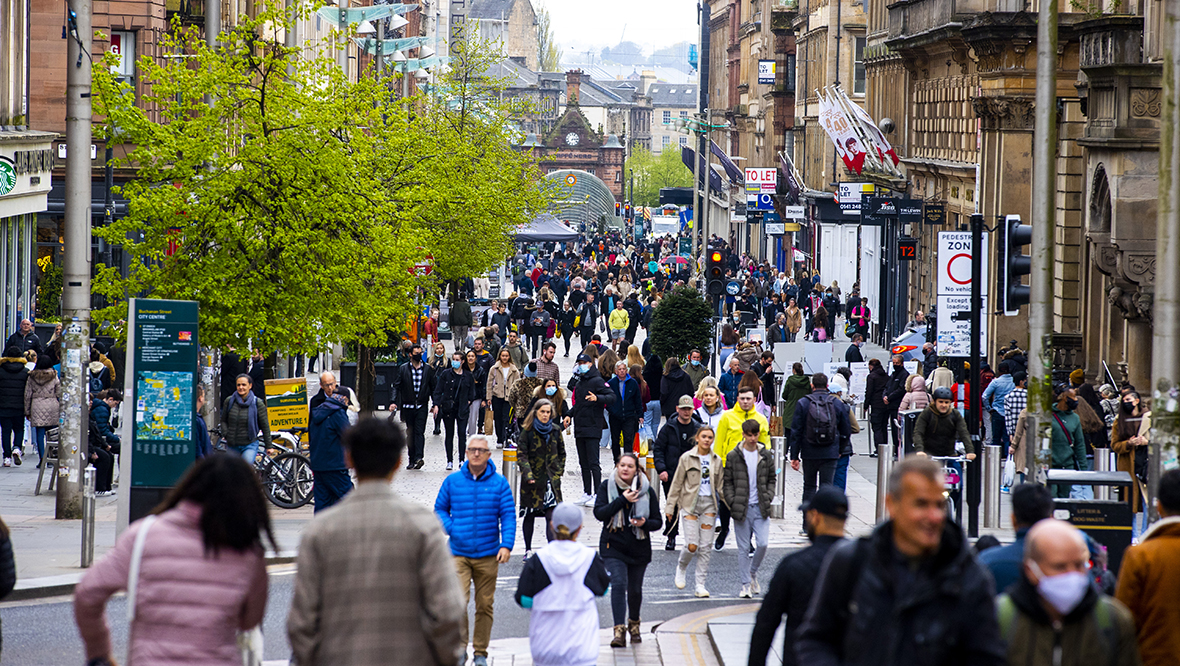 The further easing of restrictions from next Monday will go ahead as scheduled, but with certain modifications in light of challenges faced by the spread of the Delta variant.

Updating the Scottish Parliament virtually, Sturgeon said this “was a time of continued caution” and that lifting all restrictions right now “would put all of us at greater risk”.

The First Minister said she intends to move Scotland beyond level zero on August 9 – when the Government hopes to lift most legal restrictions – but that will be subject to a review based on the latest data.

She said: “While Scotland will move to level zero from next Monday, we will do so with certain modifications to our indicative plans.

“This is intended to ensure that our pace of easing restrictions is sensible in light of the challenge we continue to face from the Delta variant.

“And I will confirm that certain mitigations – such as the mandatory wearing of face coverings – will remain in place, not just now but, in all likelihood, for some time to come.

“Measures like the continued wearing of face coverings are important, not just to give added protection to the population as a whole, but also to give protection and assurance to those amongst us who are particularly vulnerable and previously had to shield.”

“It is my view that if government believes measures like this matter – and we do – we should say so, do what is necessary to ensure compliance, and take any resulting flak from those who disagree.

“We shouldn’t lift important restrictions to make our lives easier and then expect the public to take responsibility for doing the right thing anyway.”

People should also continue to work from home where possible, Sturgeon said, delaying the move back into offices until the country moves beyone level zero.

She said: “Until then, we will continue to ask employers to support home working where possible.

“I know this will be disappointing for many businesses – and also some employees who are finding home-working hard.

“But this will reduce the extent to which people are meeting up in enclosed environments or travelling together, and so will help to contain transmission during this phase.”

There are no immediate plans to drop the requirement to self-isolate for a close contact of a Covid-19 case but the Scottish Government says it remains hopeful that will come into effet when the country moves beyond level zero.

The First Minister said ministers intended to remove the requirement as long as the contact has received both vaccines and had a negative PCR test.

Sturgeon added that she has instructed education advisers to investigate if the self-isolation requirement for school pupils can be removed and what has to be done to do so.

On travel, double vaccinated people will no longer need to self-isolate upon arrival in Scotland from a country on the amber list.

Some of the other key changes include soft play centres in areas moving from level two to level zero being permitted to reopen, as well as the return of crowds to stadiums – with 2000 seated fans and 1000 standing allowed, as well as 400 at indoor events.

WHAT ARE THE LEVEL ZERO MODIFICATIONS?

Some islands in Scotland are already in level zero, including Orkney, Shetland, Coll, Colonsay, Erraid, Gometra, Iona, Islay, Jura, Mull, Oronsay, Tiree and Ulva, as well as the Western Isles and all Highlands Islands with the exception of Skye.

Tuesday’s announcement comes as a further 2529 coronavirus cases have been reported in the past 24 hours.

Four more deaths have been recorded under the daily measure – of people who first tested positive for the virus within the previous 28 days – meaning the total number of fatalities remains at 7761.

The daily test positivity rate is 11.5%.

“Hopefully, with new cases starting to fall, we will also see hospital admissions fall over the next few weeks,” she said.

“But, at the moment, the pressure on the NHS is of concern. First and foremost, it means a significant number of people suffering illness. It also means more pressure on a workforce that has already given so much.

“And, of course, it holds back NHS recovery. Every hospital bed occupied by a Covid patient is one less available to tackle the backlog of non-Covid care.”

National clinical director Jason Leitch says he’s comfortable with the forward momentum out of coronavirus restrictions, adding that “it’s not a free-for-all”.

He said: “I’m really hopeful that (we can move beyond level zero) if we’ve seen what looks like a stabilisation and maybe even a deceleration of our present pandemic.

“It looks as though we may have peaked at our third wave. I can’t tell what’s going to happen next but I’m very hopeful that the advice we’ll give for August 9 will still be forward momentum.”

However, the country’s hard-hit hospitality sector continues to anticipate tough times ahead despite the imminent move to level zero next week.

Dr Liz Cameron, Chief Executive of the Scottish Chambers of Commerce said the modified framework “deviates away from what businesses had been preparing for and moving the goalposts at this late stage will cause uncertainty, negatively impacting on business confidence and recovery”.

She said: “The postponing of the phased return of offices will be a bitter blow for employees and employers alike, many of which had been getting ready to welcome employees back into offices from next week. This will also sound alarm bells for those town and city centre businesses, reliant on office worker footfall and custom, who now need to wait another month until those workers start to return.

“Scotland’s hospitality sector, one of the hardest hit by restrictions, will be concerned that anticipated restrictions were not lifted, including little reprieve for the night-time economy, with challenging restrictions on trading remaining.”

Meanwhile, Stephen Montgomery, group spokesperson for the Scottish Hospitality Group, said “the midnight curfew is just a made-up time with no evidence to justify it”.

He said: “The Government didn’t seek our input as the people who understand how hospitality works in the real world. And we didn’t even get the courtesy of being told about this in our ongoing discussions with the government.

“It’s like Groundhog Day with our warnings about driving people into house parties and other uncontrolled spaces that lack all the precautions you find in responsible pubs, restaurants and hotels. The Government didn’t listen last year when we cautioned them about this and they’re not listening now.

“The best that can be said is that level zero is an improvement on lockdowns for most businesses. But let’s remember that late-night, wedding and music venues are still hugely affected.

“We have always supported sensible and proportionate public health measures. The hospitality sector can be part of the solution not part of the problem. It’s tragic that the Government doesn’t seem to see us that way.”