Climate campaigners walk out of COP26 in demand for greater action

Activists have said that COP26 has failed because representatives 'chose greenwash over serious action'. 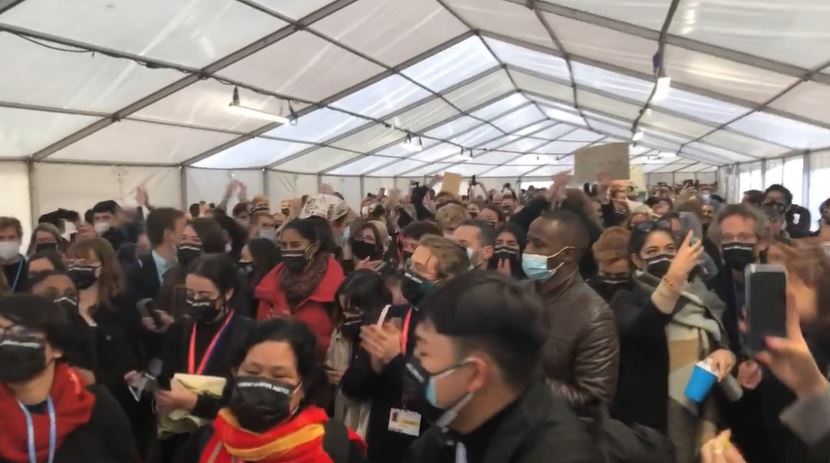 Climate campaigners have walked out of COP26 as they call for greater action ahead of the summit drawing to a close.

A large crowd marched through the COP26 blue zone as they joined protesters who had gathered outside.

Extinction Rebellion Scotland had called on activists to head to the entrance of the summit on Friday morning.

They encouraged people to bring ‘energy’ and ‘creativity’ in sending a message to world leaders that COP26 had been a failure.

Ahead of taking action, the group wrote on Twitter: “COP26 has failed because corrupt representatives chose greenwash over serious action. Their greed and cynicism has destroyed our future.”

As the group urged ‘decentralised, autonomous civil disobedience’, they added: “We choose to stand with indigenous communities.

“We stand with those on the frontline of the climate crisis, the scientists, the delegates who have pleaded for you to act and save their homes, the young activists whose future you’ve stolen. These are showing true leadership.”

Following the march through the venue, they joined a rally held by Fridays for Future, Extinction Rebellion and other groups at the gates on Finnieston Street.

Police Scotland later confirmed that two men, aged 30 and 61, were arrested in connection with alleged breach of the peace.

On demonstrator told STV News: “That was police brutality. Everyone here is distressed.

“There was no need for that much violence, there was so many more police than necessary.”

In response, assistant chief constable Gary Ritchie said: “When you view the footage you see that the officers are trying their best to keep the people safe and arrest them in a safe and proportionate manner.

“I would commend the police officers for their professionalism in very trying circumstances.”

Talks at the Glasgow summit are due to finish on Friday evening, but look set to overrun as negotiators wrangle over issues.

The new draft of a deal that could be agreed at COP26, however, appeared to have been watered down its push to curb fossil fuels.

The first draft of the “cover decision” for the overarching agreement at the summit called for countries “to accelerate the phasing-out of coal and subsidies for fossil fuels”.

But, in the new draft produced on Friday morning, that has changed to calling on countries to accelerate the shift to clean energy systems, “including by rapidly scaling up clean power generation and accelerating the phaseout of unabated coal power and of inefficient subsidies for fossil fuels”.

The inclusion of a reference to fossil fuels was a first for a UN decision document of this type but was expected to get fierce pushback from some countries – and still may not survive to the final text.