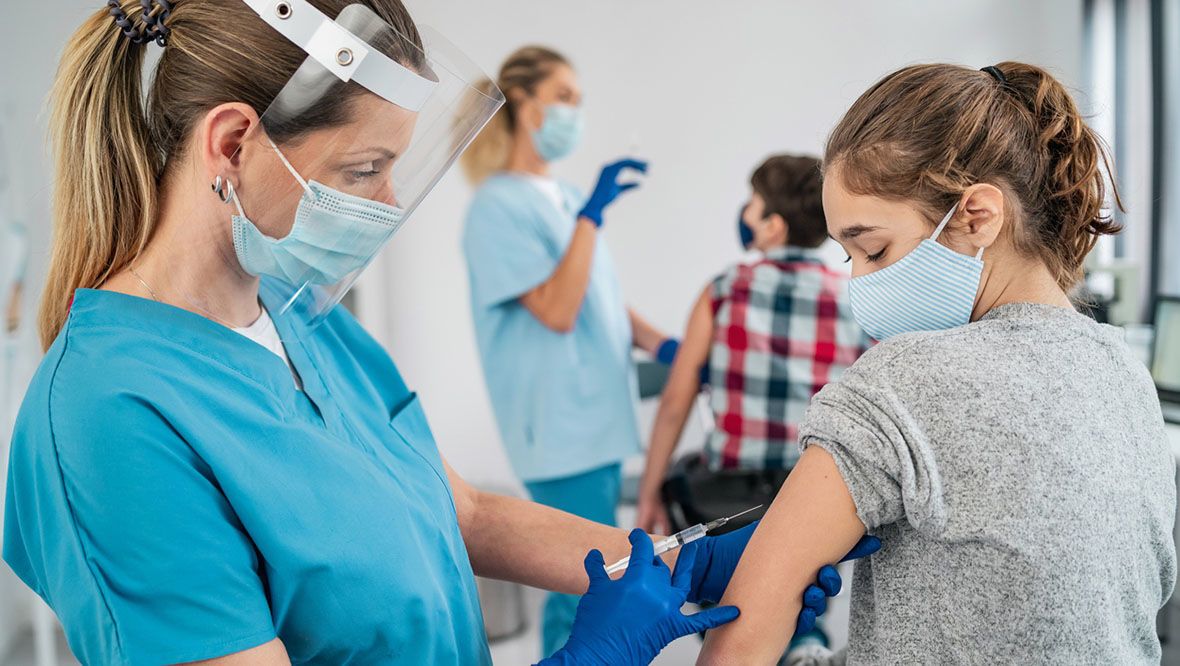 Children in Scotland aged between 12 and 15 are now being offered one dose of the Pfizer Covid-19 vaccine.

Drop-in clinics opened for youngsters in that age group on Monday.

Next week, letters will be sent to all 12 to 15-year-olds inviting them to an appointment at a drop-in centre or vaccination clinic.

The move comes after the chief medical officers (CMOs) of the four UK nations advised younger teenagers should be offered the Pfizer/BioNTech jab.

They concluded that vaccination could reduce disruption to education.

The decision to go ahead comes despite the Joint Committee on Vaccination and Immunisation (JCVI) deciding not to recommend mass vaccination of 12 to 15-year-olds.

The JCVI had said Covid-19 presents a very low risk for healthy children and vaccination would only offer a marginal benefit.

But they suggested that the wider issues, such as education, should be taken into consideration and examined by CMOs.

First Minister Nicola Sturgeon told MSPs last week: “We believe that vaccination of 12 to 15-year-olds is important and we will, therefore, move to implement the advice as quickly as possible.

“It is, of course, important to stress the importance of informed consent. I know that many young people and their parents will have questions.”

Sturgeon explained that material will be made available to provide “balanced information” to help young people and their parents make informed choices.

She said that parents and carers will be invited to accompany their children for vaccination.

Scotland’s Children and Young People’s Commissioner welcomed the advice to offer the coronavirus vaccine to children.

Bruce Adamson said children of this age group have told him over the last few months that they are in favour of having the choice to be vaccinated.

EIS general secretary Larry Flanagan said: “Offering the vaccine to young people in the 12 to 15 age group will make secondary schools safer by reducing the risk of the virus spreading through school communities and will help reduce the level of disruption to education.”

But parents have mixed views on whether their children should be vaccinated.

Arlene Dickson, who is a parent to boys aged 12 and 15, said her children already had the vaccine as their dad has an autoimmune disease.

She told STV News: “Yes, there are risks but I think the benefits outweigh them; the person getting the vaccine, it protects them from getting seriously ill and unfortunately there has been cases of 12-15 year-olds who have died and become seriously ill from getting Covid.”

However, Joanne O’Connor says her two children, aged 12 and nine, won’t be getting the jab. They are currently at home after testing positive for coronavirus.

O’Connor said: “Covid is rife at schools just now so ultimately a great majority of kids are catching it, so they are going to get their immunity from that.

“I just don’t see the need to force vaccination, there is no evidence to say children get extremely ill or unwell or get hospitalised, so for me it’s just the risk of the vaccine is not worth taking.”

More than half of all schools in Scotland reported at least one positive case of Covid-19 among pupils in the first two weeks of term, new figures show.

A freedom of information request submitted to Public Health Scotland (PHS) shows that 1455 schools in Scotland recorded a positive case between August 16 and August 27, the first two weeks of term – 58.7% of all schools.

According to Scottish Government figures released in December, there are 2476 schools registered in the country.

While it is not clear how many of the cases in schools were contracted there as opposed to the community, First Minister Nicola Sturgeon has repeatedly said the return of schools in Scotland contributed to the spike in Covid-19 cases seen in recent weeks, which she said this week has shown signs of dissipating.

Dr Sarah Chan at the University of Edinburgh “Children may not be getting as sick with Covid but they’re nevertheless suffering the impacts of the pandemic.

“And so the more we can do to slow and stop that the better.”

Meanwhile, Scotland’s rollout of Covid booster vaccinations for elderly care home residents is also to get under way this week.

The Scottish Government has confirmed older residents in care homes are the first to be offered both flu and coronavirus booster vaccines from Monday.

Frontline health and social care workers will able to book an appointment for a booster jab online at NHS Inform from Tuesday this week.

Adults aged 70 and over and those aged 16 and over who are on the highest risk list (previously known as the shielding list) will begin to be contacted by letter or by their GP from the end of September.

People on the highest risk list who were severely immunosuppressed at the time of their last Covid vaccination will be offered a third primary dose instead.

Three vaccines have been approved as safe and effective as boosters, AstraZeneca, Pfizer and Moderna, but experts have decided to opt for Pfizer as a preference after studies showed it is well tolerated and works well as a booster.