Care workers protest for £15 per hour wage outside Holyrood

GMB general secretary Gary Smith said members in the care sector would 'summon the spirit of the Glasgow women’s strike'. 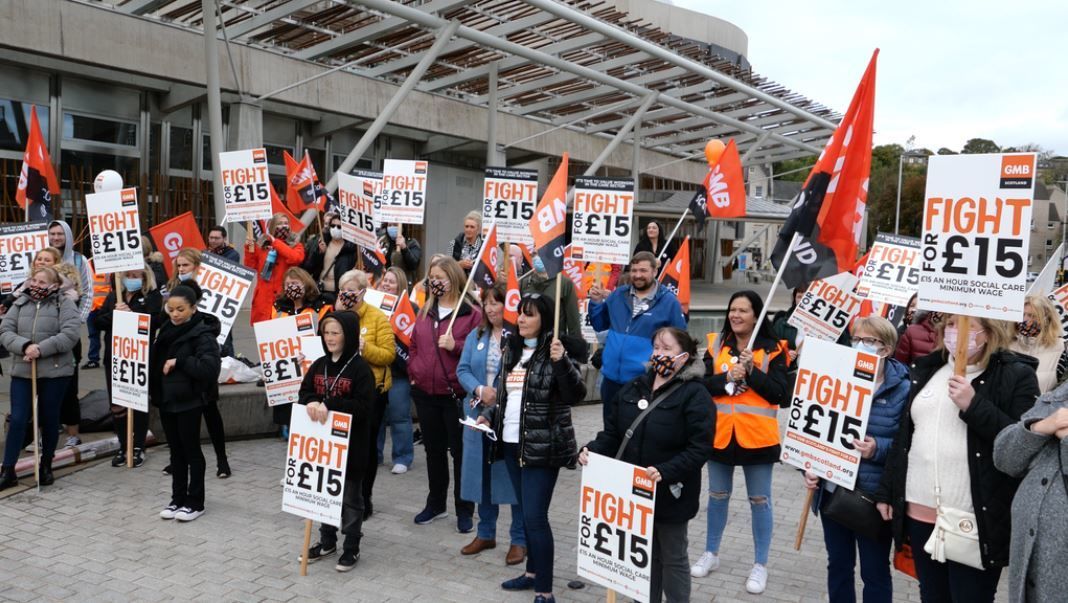 Care workers and the GMB trade union rallied outside the Scottish Parliament on Saturday to call for a £15 per hour wage.

Health secretary Humza Yousaf earlier this month announced a pay rise for care staff, taking the minimum remuneration to £10.02 per hour as part of the winter plan for health and social care.

Addressing the crowd in Edinburgh, GMB general secretary Gary Smith said members in the care sector would “summon the spirit of the Glasgow women’s strike” – which resulted in a historic payout from the council after years of underpaying female workers.

“Pay is the priority in tackling the growing understaffing crisis and lifting the unsustainable pressures not just in social care, but in our NHS too – that’s why we are ‘fighting for fifteen’,” he said.

“We know the prospect of wages just above £10 an hour won’t cut it, and if you want to retain and recruit the people we need then we must value this essential work properly.

“After the awful events of this pandemic and with a bleak winter ahead, the consequences of continuing to neglect these key workers should be crystal clear to everyone.

“But if Government fails to recognise this then we will summon the spirit of the Glasgow women’s strike and start organising for industrial action across the care sector.”

Scottish Labour deputy leader Jackie Baillie voiced her support for the campaign, and attended the protest with a number of her colleagues.

“The pandemic has left us in no doubt of the incredible work social care staff do day in day out, but applause doesn’t pay the bills,” she said.

“The pitiful pay deal the SNP handed to carers last year is nothing short of disgraceful.

“As staffing shortages push the sector to breaking point, a pay rise is not just the right thing to do – it is the only thing to do.

“If the SNP are serious about building a real National Care Service, they can start by giving the workers at its heart a fair deal and paying them £15 an hour.”

The Scottish Government is consulting on a National Care Service which would bring all publicly owned adult social care services under one body – and could include other areas such as drug and alcohol care and children’s services.