A yellow 'be aware' warning for wind and rain is in place until 9pm on Friday. 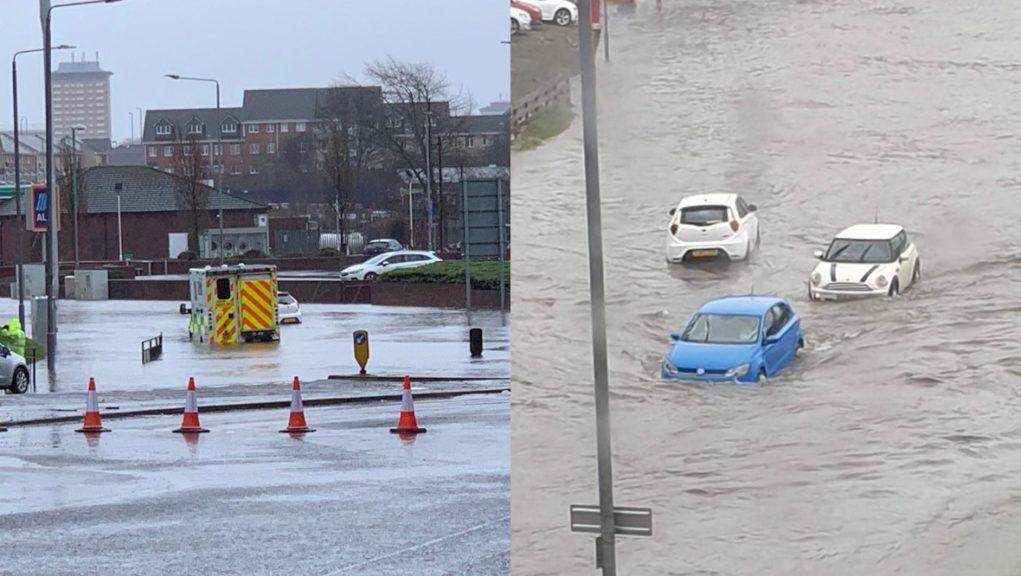 Torrential rain and high winds are causing flooding and travel disruption throughout the country with a yellow ‘be aware’ warning in place until Friday night.

There was congestion on the roads and train services have been affected.

Drivers were warned of surface water on motorways and other trunk roads and Police Scotland said they should allow extra time for their journeys.

The Forth Road Bridge public transport corridor was closed to double-decker buses due to high winds.

STV News reporter Louise Scott said there were 30-minute delays on the M80 in Stirling due to water pouring onto the road from the embankment.

All ferry sailings between Ardrossan and Brodick on Arran have been cancelled until Sunday.

Homes and businesses were at risk of flooding and STV meteorologist Sean Batty said some fields “were looking like lochs”.

Sean captured footage of the Black Cart Water in Linwood, Renfrewshire, which burst its banks and was flowing across fields and roads.

The Scottish Environmental Protection Agency issued a string of flood warnings and alerts covering most of the country.

It said: “Prolonged periods of rain are expected across western and central Scotland. This may result in localised flooding and surface water impacting communities across these areas.”

Lochwinnoch Primary School in Renfrewshire was closed at lunchtime due to flooding in the surrounding village.

Renfrewshire Council said: “Our teams are out working hard to clear flooding across Renfrewshire and we would advise to avoid travelling around Lochwinnoch, Linwood Toll (Ferguslie) and Candren Road (Linwood).”

Edinburgh Bus Station was closed as a result of falling masonry, while winds also saw Edinburgh Castle shut to visitors.

Friday night’s Premiership match between St Mirren and Hearts in Paisley has been postponed.

Meanwhile, a yellow ‘be aware’ snow and ice warning has been issued for north and central Scotland on Saturday, the Met Office said.